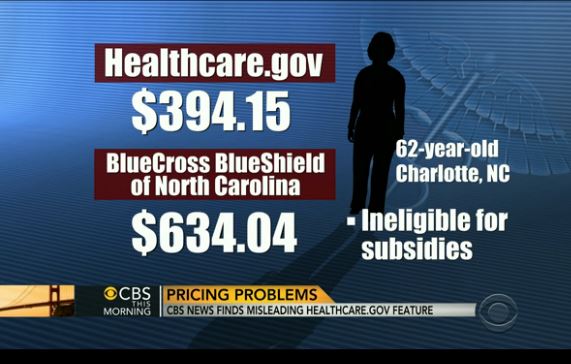 Joan Walsh of Salon.com threw a classic Salon.com race-card fit the other day because Ted Cruz referred to healthcare.gov as being run by Nigerial scam artists:

Hey, did you hear the one about the disappearing “Nigerian email scammers”? They’ve “become a lot less active lately” because they’ve “all been hired to run the Obamacare website.” That’s Sen. Ted Cruz, folks, on his Reactionary Real America Victory Tour Monday night, and he’ll be here all week, maybe all decade. Tip your waiter!

Declaring that our first black president’s signature policy achievement is being run by “Nigerian email scammers” is GOP dog-whistle politics at its finest. Of course, Cruz wasn’t just going for cheap laughs at the expense of the Affordable Care Act. He knows it’s a short hop from Nigeria to Kenya for his Obama-hating Houston audience. 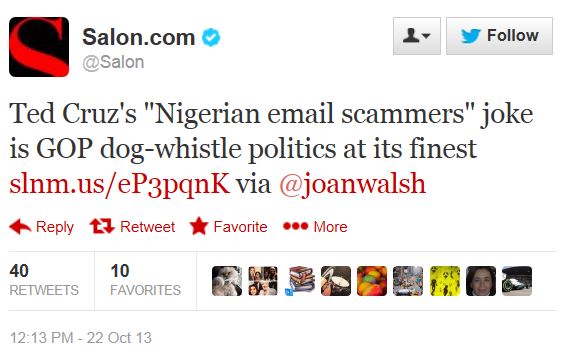 It’s actually not a short hop from Nigeria to Kenya, over 2000 miles, but whatever.

I think the Nigerian scam artist analogy fits, although there is no single perfect analogy for the redistribution of wealth scheme that is Obamacare.

The American people were promised one thing, and are receiving another.  The thing they were promised — you can keep your doctor and your insurance, and pay less through easy to use exchanges — never existed, any more than “Mohammed Abacha,the son of the late Nigerian Head of State.”

But since we have to be absurdly sensitive to “short hops” from Nigeria to Kenya so as to stay off of Salon.com’s radar, perhaps we can refer to healthcare.gov, and Obamacare more generally, as BernieMadoff.healthcare.gov.  Again, not a perfect analogy, but it demonstrates a point.

Once again, what you are promised is not what you get.  As with Madoff, the promise was merely the hook, and those who “pay less” rely on future insureds and taxpayers paying more.  If those future insureds, particularly The Bros, fail to pay in more than they should, Obamacare collapses much like a ponzi scheme collapses when the con artist can’t find new “investors” to pay older investors.

CBS News reports that HealthCare.gov pricing feature can be off the mark:

CBS News has uncovered a serious pricing problem with HealthCare.gov. It stems from the Obama administration’s efforts to improve its health care website. A new online feature can dramatically underestimate the cost of insurance.

The administration announced it would provide a new “shop and browse” feature Sunday, but it’s not giving consumers the real picture. In some cases, people could end up paying double of what they see on the website, CBS News’ Jan Crawford reported Wednesday on “CBS This Morning.” …

But CBS News has learned the new “shop and browse” feature often comes with the wrong price tags….

CBS News ran the numbers for a 48-year-old in Charlotte, N.C., ineligible for subsidies. According to HealthCare.gov, she would pay $231 a month, but the actual plan on Blue Cross and Blue Shield of North Carolina’s website costs $360, more than 50 percent higher. The difference: Blue Cross and Blue Shield requests your birthday before providing more accurate estimates.

The numbers for older Americans are even more striking. A 62-year-old in Charlotte looking for the same basic plan would get a price estimate on the government website of $394. The actual price is $634….

Industry executives CBS News spoke with could not believe the government is providing these estimates, which they said were useless and could easily mislead consumers. They also said that the website repeatedly states the actual prices could be lower, but it makes no mention that they could be higher.

I hope that comparing healthcare.gov and Obamacare to Bernie Madoff is not, you know, anti-Semitic, because it’s almost precisely the same hop from Jerusalem to Kenya, as from Nigeria to Kenya

“It’s actually not a short hop from Nigeria to Kenya, over 2000 miles, but whatever.”

Geography is racist –The Left

Math is ray-ciss: The CBO

This whole thing is such a huge mess, that I’m now wondering if the SCOTUS is going to bail Barry out in one of the cases currently working its way up through the federal court system.

With the whole house of cards collapsing, what more could Barry wish for at this point than to have the SCOTUS scuttle Obamacare? Barry could then lament that the dream of “universal coverage” was killed by the “activist” SCOTUS. He would say that Obamacare’s “kinks” would have all been worked out in time, and the whole system would have run like a dream and fulfilled all his promises, if only those raaaacists on the Court had not destroyed his signature legislation.

Walsh is such a liar that Cruz could have said, “Bulgarian email scammers” and she would have found a way to hear a “dog whistle”.

And, remember, those dogs of the Collective are uniquely able to hear “dog whistles”.

So, who are the dogs?

How in the world does this not land under consumer fraud?

If Apple listed a price of $200 for you iPhone when you ordered it but billed you $400, they’d be facing a Federal Indictment.

Reason Number 5,187,786 why the U.S. Government exempts itself from its own laws!

Otherwise, Obama, his Czars, advisers and Cabinet would be under indictment under RICO. Oh, and the DNC and RNC, too.

You forgot to “SNORT! SNORT!” Ernestine!

Right! If not for my names curse, I would have been able to pull that up.

But, NOOOOoooo… When I need a name, it is GONE.

Stupid comparison and you’re stupid if you don’t think liberals will play the race card every time.

First year Law students will tell you – the Truth is always a defense.

Yes, unless you’re a hard-core Leftist, in which case the Truth is often an indictment.

Perhaps that’s why the Left is constantly throwing around baseless accusations: to keep us on the defensive so we’re forced to wield the Truth as a shield rather than a spear.

Huge respect here for Cruz, who is willing to tell it like it is and take the slings, arrows, and the 100% certain claims of racism. obama’s days of skating without serious and articulate criticism are over because Cruz won’t back down.

“God bless him, bless his heart, president of the United States — a total failure, losing all credibility with the American people on the economy, on the war, on energy, you name the subject,” Pelosi told CNN’s Wolf Blitzer in an exclusive interview.

FWIW: The formatting that works in Firefox does not work here on Chrome. The portraits and top section are out of whack.

As for these people that see racism in everything, they not only seem to be projecting their own racist beliefs, but they inject it into the public arena in a scary way.

I just read on Drudge that 300,000 people in Flawwwww-rida just lost their health insurance. I wonder how many voted for fairness, lower health insurance rates and for some ‘a that social justice.

Has anyone noticed yet that the government sites do NOT go above 64 years of age?

I presume I’m supposed to have croaked several years ago. I do apologize for the longevity.

Don’t worry they have “death panels” to fix that…

A representative from the IRS will soon be contacting you about that.

How far is it from Nigeria to Indonesia, Joan? How about from Hawaii to Nigeria, Joan you twit…

Such exempts me and no doubt many other folks who are seeing huge increases in premiums.

About a week ago, I finally made it through HealthCare.gov only to have the system refer me back to Illinois for enrollment in Medicaid.

Amy’s comments here about Medicaid have me concerned, so I kept looking into alternatives and finally noticed in the list of exemptions above, reference to “recognized health care sharing ministries” which I’d never heard of before.

Three of them are briefly reviewed here: http://christianmedplans.com/which-plan/

Those look like those are a great alternative to Obamacare for active Christians. Individual monthly cost for any of those HCSMs is about $150/mo.

And for all the flack Obama gets for his perceived ‘war on Christianity’, it’s a blessing and relief to see that the PPACA allows for faith-based health care solutions.

One of them is about 50 miles from here and I’ve made an appointment to visit one of the counselors and talk about coverage. I’m truly blessed that there is such a ministry, where the monies given go to helping people and not building another building. That’s something I could support, in this world of bait and switch.

After 14 minutes of applause yesterday night in Arlington, TX, Sen. Cruz used that Nigerian joke in his talk. He almost got fourteen more after using it, but our arms were tired letting him know how much what he did on the senate floor meant to us. Wish it could have been 21 hours of applause. 😎

Salon has been totally off the rails lately (yes, even more than the norm).

Not sure why. Maybe to deflect at all costs. Maybe, like others I have noticed from the left, were true believers.

Believers that they are the smartest and brightest. Anything they do that goes afoul is surely because the evil doers on the right have foiled us once again…

But, some find themselves in the corner of a room, with a semi spilled, semi drunken glass of wine, repeating to themselves…

…HOW THE HELL CAN’T WE EVEN RUN A WEBSITE!!

Case in point on “true believers”-

Not one has used the exchange, bought insurance, went to the doctor, got the bill, and squared it up, then said, “yea, that worked well.”

Why!!!! They can’t even manage a vowel movement!

Obama changes promise from “You can keep your healthcare” to “I can keep my healthcare.” Ann Coulter

Bernie went to prison when he was caught scamming. Corzine took and lost $1.5 billion from investors (breaking the supposedly solid wall of protection) to cover his proprietary trading gambles, but that investigation seems to have been dropped.

Now that we know that Obama and his gang deliberately defrauded the American people, does he get the Madoff treatment, or get “forgiven” like Corzine?

…and if you don’t like that, they also has the
JimmyHoffa.healthcare.gov option!

Just take a steel drum can, 50 pounds of cement and drink an ocean……. then try to call your Fed Government in the morning.

Brilliant. Though, I suspect many are not familiar with the “vapor” phenomenon.

Look it up, be informed.

If they were a company, you could sue them. Or, simply do business with one of their competitors. Since its the government, you have no recourse.

That, in a nutshell, is all the reason anyone should need to never vote in favor of giving government control of our healthcare, or anything else.

I expect to see the GOP and Dems allotting millions, which will bloat to billions, for Obamacare. They have no intention of letting it implode. I cannot think of any government program that’s ever done so. We live in an era of trillions in debt, where bad ideas receive more funding. The next campaign spiel come next November will be bright ideas from multiple candidates on how to “fix” Obamacare.