Researchers studying China’s equivalent of Twitter have found that anger tends to be the most influential emotion on the social network.  It spreads the fastest and most broadly, more than several other categories of emotion.  The findings could offer insight into studying how information spreads on other social networks like Twitter.

From a summary of the study conducted by researchers at Beihang University in China, entitled Anger is More Influential Than Joy: Sentiment Correlation in Weibo:

Recent years have witnessed the tremendous growth of the online social media. In China, Weibo, a Twitter-like service, has attracted more than 500 million users in less than four years. Connected by online social ties, different users influence each other emotionally. We find the correlation of anger among users is significantly higher than that of joy, which indicates that angry emotion could spread more quickly and broadly in the network. While the correlation of sadness is surprisingly low and highly fluctuated. Moreover, there is a stronger sentiment correlation between a pair of users if they share more interactions. And users with larger number of friends posses more significant sentiment influence to their neighborhoods. Our findings could provide insights for modeling sentiment influence and propagation in online social networks.

Over a period of six months, the study collected 70 million tweets from over 200,000 users on China’s Weibo network.  Researchers divided the content into four categories – anger, sadness, joy and disgust – and zoomed in on users who interacted with others at least 30 times during the test period.  They analyzed how other users responded to messages to measure how frequently others replied with similar sentiments and/or spread the content.

The result: anger spreads the fastest.  It spreads broadly, too.  The rate of sharing such messages among close social networks helped to spread the content outside of just circles of immediate friends. 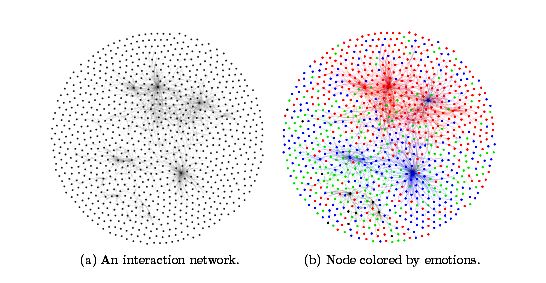 The spread of emotion is reflected on an interaction network above on the right (each node is a user), broken into categories: anger (red), joy (green), sadness (blue) and disgust (black). Image credit: State Key Laboratory of Software Development Environment, Beihang University.

While the data in the Beihang University study of course reflects sentiments expressed by users in China about issues related to China, it demonstrates that anger is a powerful emotion. It’s also a potential indicator of what behavior on other social networks might show us.

I wouldn’t be surprised to see the results line up in a similar way in the US.  For anyone who is active on social media, you can observe in an anecdotal fashion that anger does seem to be an influential content driver on sites like Twitter.  Just look at a hashtag related to the Zimmerman case, for example.  Or pay attention to some of the heated debates over issues such as gun control or health care reform.

Some websites that have glanced over the study have offered a slightly snarkier (and probably more entertaining) approach to summarizing all of this than I have here – see Your Crappy Mood Is Contagious so Thanks a Lot for Tweeting About It – but admittedly, they’re probably not that far off.

We’ve already seen recent information to suggest that hostility is rising on social media and is spilling into real life.

MIT Technology Review ponders the same thing I did:

Of course, it would be interesting to see whether the same effect can be observed in western networks such as Twitter. That should be relatively straightforward to find out given the growing interest in sentiment analysis and the increasingly effective tools available to carry it out.

The moral of the story is that when it comes to the spread of information, anger is more powerful than other emotions.

That said, I’d love to see a similar study conducted for Twitter and Facebook in the US (hint hint, Pew Internet).

Having built twitter sentiment analyzers as well as worked with some third party tools I would like to see how the researchers determined sentiment for 70 million tweets before I gave this research very much credence.

I’d wager they classified Ad Hominem tweets as “Anger”. Seems Ad Hominem is the preferred method of debate these days.

I am rubber, you are glue 😉 hehe

LOL I see what you did there 🙂
and someone downvoted, jeese…

Let me mention Porlock’s Second Law, as promulgated elsewhere: “Any sufficiently long thread will turn into a pissing contest.”

I’d like to see somebody measure the speed of scandal and dirty jokes.

Anger is a response to fear. Just as physical pain is a signal that something about one’s body requires attention, so does anger signify that a threat may require address. In a social critter like man, what threatens my neighbor may also threaten me. Neighbor angry, me need know why. This all proceeds initially at the limbic level (amygdala), then passes up through higher levels as we tease out the potential threat and cogitate a response.

It’s like herd animals on the Serengeti – one of them hears something in the bush, snaps its head around to check, and all the rest get spooked too, whether they heard the sound or not.

Those who check out threats implied by the anger/fear of a social compatriot are more likely to survive when the threat is real.

Soon Twitter will evolve from 144 words, perhaps spring a new limb of 36 additional words, or maybe grow defensive horns of a dozen words each. It’s all very sciency.

Griping and venting instigate commentary, whereas satisfaction short of exuberance doesn’t create a need to say anything.

REDDIT has a great link to an article on Orwell:

Novel story: 14 little known facts about the writing of 1984 (inktank.fi)

And, of course, Orwell worried about the effects of both fascism and (socialism) communism, when governments put the “average man” under its thumb. Well? Maybe you can’t? And, among there’s a healthy discussion. Where even though China doesn’t allow 1984 to be read. (And, it’s one of the most banned books in the world). It is also translated into over 100 languages. And, that’s how ideas grow among people, so that one day / some day … they may achieve their inalienable rights.

Twitter isn’t literature. It’s a flash in the pan.

Saying anger is a problem on Twitter really pisses me off.

Yeah, but what if we derive joy from our angry tweets?

I almost wrote just such a disclaimer in there, just for you.