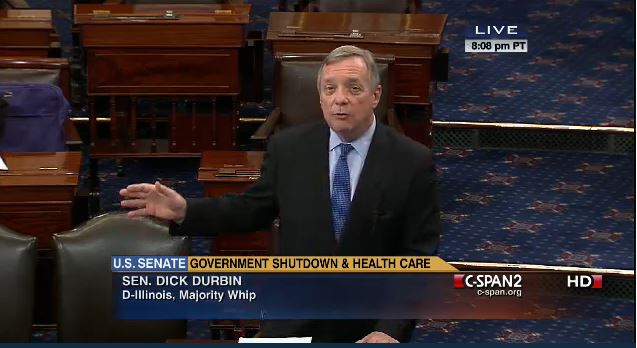 Pride goes before destruction, and a haughty spirit before a fall.

All because Democrats refused to have Congress treated like ordinary citizens as to Obamacare exchange subsidies, and ordinary citizens like businesses on delay of the Obamacare mandate. Democrats “shut the government” to protect privilege, because their pride could not let them compromise.

Earlier, Harry Reid and Barack Obama were clucking like roosters. Chuck Schumer took to the floor of the Senate looking like the cat that caught the canary.

It might not end as well as they think. They wanted it, they got it.

In fact, in their late night speeches, the sense of triumph was gone.

.@SenatorReid @SenSchumer on Senate floor – looking like dog that caught the car – the hubris is gone, they got what wanted #BlameHarryReid

Democrats are the problem here. Attempting to blame Republicans for a law that did not get ONE single Republican vote in either house of Congress smells to me like something a Democrat pretending to be a “conservative” would say in order to split Republicans against themselves. Republicans didn’t create this and Republicans didn’t vote for it, not ONE of them. To attempt to somehow make this seem like the fault of Republicans is absolutely absurd. I would be willing to bet that more than half of those in social media and blog comments attempting to blame the Republicans for this are actually false flag Democrats agitating Republicans against themselves. There is nothing the House can do beyond what they have already done. The rest is up to the Senate and the Democrats control the Senate. The Senate actually PASSED the House bill defunding Obamacare late last week, but then Reid immediately stripped that provision out as soon as it passed. There is nothing, absolutely NOTHING the Republicans can do right now beyond what they are doing right now. Anyone who believes there is anything more they can do is living in a fantasy world or is playing for the other team.

“… smells to me like something a Democrat pretending to be a “conservative”.”

Smells more like a bunch of paid acorn paid hacks sitting in back offices all over the country.

There seem to be a lot of those lately. They come out to play on ObamaCare, but they turn out not to be very knowledgeable.

Should I wear my seatbelt?
How can I tell if my food is good?
What sm I supposed to do now?
Ahhh, we ‘re all gonna die!!1!!1

I’m happy. The MSM is forced to interview Republicans, and Americans will hear both sides. I think this will go well.

The sinister Harry Reid.
In another time, he’d be hanged.

The House of Representatives has been doing its duty even while trying to deal with “all sorts of crazy” that is Harry Reid. The Senate via Harry Reid is not doing its duty; Harry Reid as Senate Majority Leader not going to meet for a conference is a dereliction of his duty.

The House passed three CRs, the Senate can pick one and pass it, or decide to go to conference.

Sounds like Reid wants single payor premium which would, of course, completely destroy the insurance industry.

[…] Happy Fiscal New Year! It’s an Oktoberfest shutdown! Big Media will at the stroke of midnight into October 1 defend and protect ‘can’t get […]

Why does this feel like a moment from Samuel, when the people DEMAND a king, and God tells Samuel, “Give them what they want.”

Well, you can’t blame them. The nobility and their retinues are certainly entitled to indulgences from the king, and not to be treated like serfs.

There is a fine line between the time you believe you have the tiger by the tail and the point in time when he has you by the Ass. I believe ole Harry might not recognize this moment from where he stands at the dais looking down upon every thing he feels he controls.

Well, the government is shut down. Sounds like Obama has earned himself another vacation!

If facts, logic, and common sense mattered, Obama and Reid would be running their corrupt games back in Chicago and Vegas.

In modern politics, after two generations or more who’ve been weaned on federally controlled public education, reality doesn’t matter so much. Perceptions win every time.

Even if we somehow come out of this without diminished prospects, it was a poorly chosen battle executed without a clear strategy. If that’s our blueprint for running the country, it is indistinguishable from what we have. Meet the new Boss, same as the old Boss.

I found it interesting that most of the Democrats on Sunday’s political talk shows had “former” in their title while most of the Republicans were current members of Congress.

Does the media spin match what Democrats in Congress are hearing from their constituents? I doubt those who don’t represent heavily gerrymandered minority-majority districts are hearing a lot of praise for standing with Reid and Obama.

Hey… if nonessential personnel get laid off, does that mean Joe Biden doesn’t have to suit-up at all tomorrow?

Does anyone have that breakdown handy, by any chance?

Okay, I found what a “shutdown” has meant re. essential vs non-essential employees in the past:

There have been 17 funding gaps since 1977 ranging in duration from one to 21 days. In November 1995, when President Bill Clinton vetoed a CR and there was a funding gap for five days, only about 800,000 out of a total of 4.475 million federal employees were furloughed.

Only about 280,000 federal employees were furloughed during the December 1995 to January 1996 funding gap. During this time, the Social Security Administration initially retained about 5,000 employees and then called back an additional 50,000 employees within three days to continue paying benefits and processing new claims, keeping over 80 percent of the total employees of the agency employed despite the lack of a CR.

Still haven’t found numbers as to how many are estimated to be actually furloughed (i.e. “non-essentials”) this time around.

Are all 57 States closed?
Do we all have to speak Austrian now?

Democrat Rep. Corrine Brown: ‘We shat down the government!’

When I think of the bureaucracy in Washington D.C. I can’t help but think of the Capitol in ‘The Hunger Games.’ The special people. The chosen ones. While the rest of the country has been struggling and wondering how they will make it without a job this town has been booming like the California gold rush. Partying and dancing and dining while the rest of the country begins to burn.

But this morning things look a little different. There is a sense of unease rippling through the machine.

It makes me smile quietly.

If Reid and Co. had been doing their effing jobs and passed a real budget at any time during the last 5 years, perhaps we wouldn’t have this annual drama called “Continuing Resolution.”

I’ll just quote someone who seems to have a way of getting to the point very quickly — three guesses who it is.

She also emphasized that if government employees are deemed “non-essential,” perhaps they shouldn’t be on the payroll anyway.

and another zinger:
Hannity had quoted Obama, re: Syria “We don’t do pin-pricks.”

She responded ~ “We don’t do pin-pricks but sometimes we elect them.”

Both of these made my day.

Keep it shut. Padlock the place.