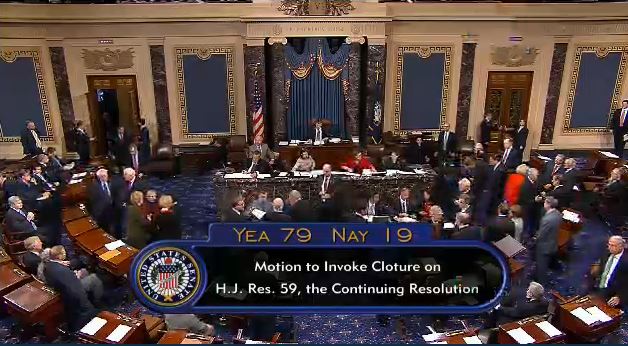 The procedural explanation is here.

To the Senators who just voted for cloture: We won't forget your vote today. #MakeDCListen #tcot

Interesting note: Sen Flake is missing votes today bc of son’s wedding. He said he would have been a “no” had he been present. #fnpolitics

Once Cloture was invoked, the rest was a formality with the vote to remove the defunding provision not needing 60 votes, and passing on a party-line vote: 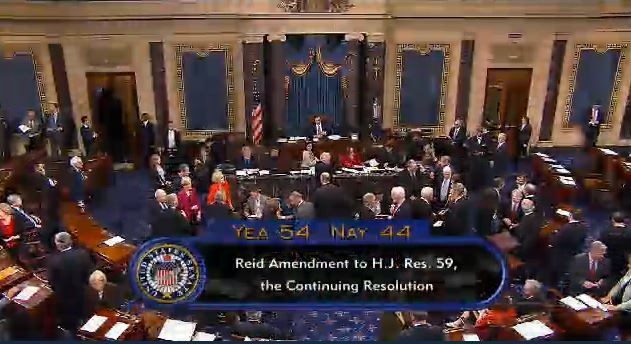 The final vote to approve Harry Reid’s funding measure passed also along party lines, and now goes to the House: 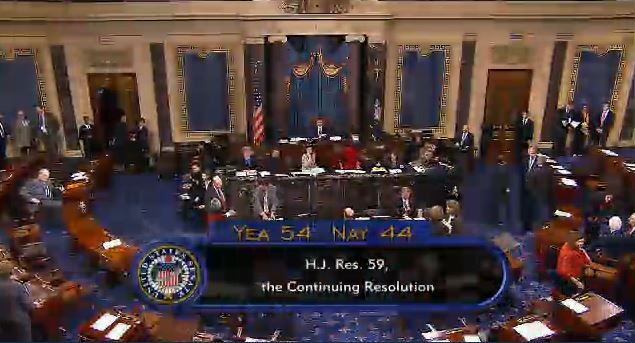 Cruz says when CR comes back from House, "it will be an opportunity for Senate Republicans to come home." #fnpolitics

Mark Kirk the only Republican to vote for final passage of CR.

Day of the RINO

Does Cruz have votes to defund ObamaCare? No. Did he get everyone to spend week talking about how it sucks and make Dems defend it? Yes.

Here is the roll call on the vote:

Oops. That was for the motion to PROCEED to cloture from yesterday.

Those “Republicans” who voted to give Majority Leader Reid the Ability to add in Obamacare funding:

BOOOO-HISSSSSSSSSSS Kirk. I can’t tell you how many times I called each of his offices. I’ll be first in line to help whomever will primary him. Dustbin is worthless–a Socialist in a Democrat’s clothing. bah humbug to both of them.

Mark Kirk calls Dick “sack-of” Durbin and asks him how he will vote.

I didn’t give you the down vote, that was for the people on the list.

A correction/retraction for the record:

DEB FISCHER of Nebraska DID NOT VOTE FOR CLOTURE. The list above is in error, and I make full apology to Deb Fischer for any unintended or intended consequences of this posting.

There you go peasants. The elite knows what is good for you. Now pipe down and pay our premiums.

Ignoring the results of objective testing and real world experience is half the fun of being a progressive. Lying about it is the other half.

Feeling superior to others is just a bonus.

But why let actual facts get in the way of demagoguery and building a 1.5 million name list of suckers who think signing an internet petition has some effect other than putting themselves on a list for future fundraising appeals?

So, Estragon, are you a troll? The CR does fund Obamacare, because as Harry Reid strips out the DEFUND Amendment to the CR, it restores funding from the Senate. NOW it goes back to the House to see if they’ll change THAT move by Reid, and restore the defunding of Obamacare as a condition of agreeing to the CR. Get it?

The sucker list is really going strong on the Democrat side, and considering how many of them are low-information voters, the rest of us will just laugh as they find out the real personal cost of Obamacare…Can’t wait.

Amanda Carpenter is a Cruz staffer.

Speaking of empty heads. Isn’t it long past time to flush what’s between your ears?

Bye Bye Rinos. We have seen who has voted to help Harry Reid and the Democrats, and we will remember. I will support anybody that runs against anybody on this list. LOSERS

Agreed! If they’re going to vote like Democrats they might as well be replaced with Democrats. The end result wouldn’t be different.

When all of the Senate who voted this stuff leaves office, they should be denied their salaries, pensions and jobs connected to government or to the downfall of America. After all, isn’t this what they are doing to Americans?

I know its PPP, but Cruz has jumped to 1st place in their poll released today ahead of Chris Christie and Rand Paul. This primary is going to be interesting.

People are missing the real effect of all this. For the first time in decades, Republicans actually fought back. Most of them didn’t want to, but went along with it when they saw the writing on the wall.

Having done so once, they now know they can. A few of them (unfortunately too few) will now learn that it’s okay to be a little bit aggressive. The party desperately needs some aggression.