There have been many accusations flying about the Senate procedural gymnastics over the Obamacare defunding House bill.  It has been, frankly, confusing because of Senate rules.

As I understand it (and please correct me if I am wrong), Harry Reid does not want an up or down vote on the House bill.  If that happened, and if Democrats killed the existing House bill, Democrats could be blamed for “shutting down” the government.  If by some miracle the bill passed the Senate, Obama would veto it, and he would get the blame, in theory.

Here’s how Heritage explains it:

According to multiple media reports, Senators will engage in procedural gymnastics this week with the explicit goal of removing the defunding language from the House-passed bill. Over the weekend, Heritage Action explained the importance procedure would play this week:

Before Reid can move to eliminate the defunding language, he must first secure 60 votes to invoke cloture. That vote, which is likely to come late next week, is a procedural motion that would facilitate efforts by Reid and others to strip the defunding language from H.J.Res.59. If Reid uses this procedural trick, a vote on the motion to invoke cloture is a vote to undermine the House-passed bill.

At some point this week, the Senate will vote to end debate on the House-passed bill. (In Washington speak, they will vote to “invoke cloture.”) What does this mean? Senator Bob Corker (R-TN) told Politico he would “vote to end debate on it, because [he likes] the policy.” But there is just one small problem: The vote is not on the underlying policy, but rather the procedure Reid has dictated. On Twitter, NBC’s Tom Curry pointed out pro-Obamacare Senators would vote alongside Sen. Corker “So that Majority Leader Reid can offer a motion to strike the defund Obamacare provision from the [continuing resolution] CR & then vote on the clean CR.”

Curry is exactly right. If the Senate does vote to end debate, Reid will immediately move to strike the defunding language. Because of the nature of the Senate’s rules, Reid would not need 60 votes; he could do so with a bare majority of just 51 votes. 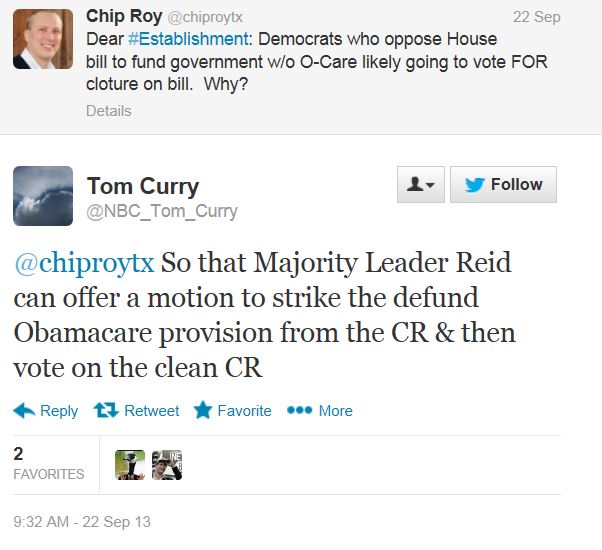 If this explanation is correct, then protestations from Mitch McConnell and others that they want to vote for cloture so they can vote on the House bill are not accurate.

That is all correct. And no less confusing, lol.

I wonder if Cruz will filibuster?

Voting NO to cloture

equals (forcing a vote on)

YES to funding government, except Obamacare

Cruz should spend a few hours filibustering on just that explanation, before the cloture vote, if he gets the chance.

Some simple phrasing (which I attempted in bold) of the procedural purpose should be tweeted to all, constantly.

No presidential pardons … exempt us ALL

A commenter on Instapundit reports that McConnell’s phone lines are melting down with angry phone calls.

Let me mention one thing, before this thread takes off. “De-funding” by stern text in an amendment to a CR is a temporary measure. It does NOT stop the PPACA, and it relies on enforcement. So just who will enforce the amendment text? So long as the PPACA is the law, until rescinded, there are a half dozens ways around the text in the CR. This whole show is pure Kabuki.

It was Clinton who shut down the government twice in 1995. Who was blamed?

Any plan which concludes with, “… and then, miraculously, the American people rise up to stand with us and smite the socialists a mighty blow” is a pipe dream, not a strategy.

And guess what? Most of the funding for Obama-Care doesn’t come through the budget anyway, it’s in the tax laws and other statutes, like entitlements.

As Dr. Sowell points out, not only is it futile, it is playing into Obama’s hands. It had become impossible for even his lovers in the media to disguise the fact that he is totally incompentent and everything he touches turns instantly into rancid feces.

But thanks, Sooper Geniuses, now the media can ignore the bad news in Syria and Iran and North Korea and coal plant regulations and etc., and concentrate on blaming Republicans for a shutdown that was totally unnecessary. “Stripping out defunding” changes little, but the CR leaves sequestration cuts intact and offers no new spending for Obama. It’s a pretty good deal considering we control only one-half of the Congress.

Wile E. Coyote himself couldn’t have constructed a better trap for Obama.

I’m a relative newcomer to politics … at least to the “inside baseball” level, as opposed to LIV. I don’t doubt your expertise or knowledge.

But what is happening (afaik) is the further exposure of the recalcitrant leftist, who now must loudly proclaim “we will NOT NEGOTIATE”.

There will be no defunding, probably not even a symbolic defunding. But there is a rigorous entrenchment by the left behind Obamacare. This will harm them, as I see it.

As for all there other failures abroad, or their adherence to man caused hurricanes and 20 foot tidal waves on the east coast, or the various radicals using government to supply weapons to cartels, or attack tea party groups … that is still in the air.

Can the media really ignore all the other chaos from the left’s platform, just because Cruz is making noise? I sorta commiserate (feel your pain) with your apparent aggravation for the more religious right that pushed unprepared candidates, and tried to co-opt the tea party. Missouri was lost because of Huckabee’s guy, not the tea party’s woman.

This is not that, as I see it. All Cruz has done is make the left vocally cling to their leftist religion and their anti-guns. The game is afoot … they are flushed out. Don’t go wobbly.

and cheers … I appreciate contributions from wise folks that have been in the trenches. Just wanted to convey another view.

Ok, but if you filibuster the CR to prevent Reid from changing it, aren’t you to blame for there being no CR and shutting down the government?

Not really because what he is actually filibustering is Cloture, which is basically a procedure for fast tracking a bill that allows the majority party to change the bill and send it back to the house for approval. Cloture, limits debate, limits amendments to only those that Harry Reid wants to allow and then only takes 51 votes to pass the bill with the new or removed amendments.

Also, one major point that really needs to be made is that not allowing cloture to happen in no way stops the bill from being voted on, the bill can still travel through the senate under the normal voting procedures with no limitation on debate and an up or down vote, which is what Reid is trying to avoid.

The sad part is that Democrat progressive operatives like McCain, McConnell, and Graham are trying to help their fellow democrats.

Ok, so this is cloture on the fast-track provisions, not on the bill itself. That’s what I wasn’t getting.

Frankly Professor, I’m not sure what you just said…but I think it had something to do with kicking a can down a road.

Frankly, after my follow Americans re-elected Barack Obama to a 2nd term, I came to realize there is nothing–NOTHING– to stop this out of control Federal government, and would, is short order, co-opt State and local governments.

That said, Ted Cruz has gone a long way to purge my cynicism.

It’s gotten a lot further down the road than ever before. Thanks to one man’s conviction.

You can measure the value by who’s losing their minds over it: moderate Republicans and liberals.

So, what good are principles if a person never follows them? That’s the question that must be addressed to Senators McCain, Graham, McConnell, and Cornyn because it sure seems that they follow only the principle of wanting to be re-elected and to be in good standing with their Democrat colleagues. That their conservative supporters are being told to go piss up a rope!

I hope Cruz is able to hang on in there for quite some long time. We need more Conservative stalwarts like Cruz and Palin!

You’re just not being practical, Doug. The whole point is not to actually shrink government – it’s to win elections so you get to run the big government.

Every Republican leader who pats you on the head and says to be reasonable about defunding ObamaCare is exempt from it.