It has been a fascinating week of news related to San Diego Mayor Bob Filner and his growing list of sex harassment victims.

In fact, San Diegans are now clamoring for Filner’s ouster so loudly that a popular radio talk show sponsored a sky-written plea, an homage to the “Wizard of Oz”. 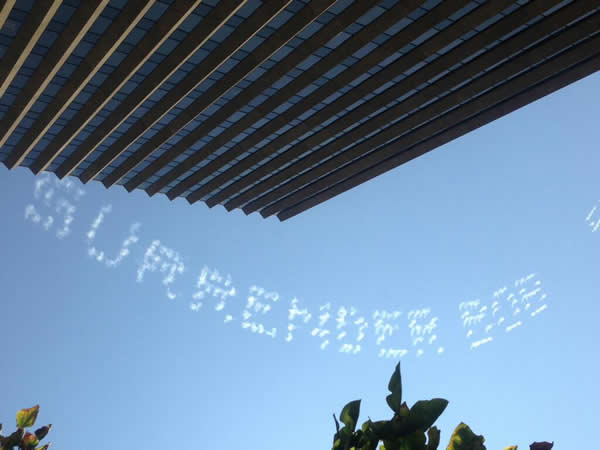 The words appeared over Rancho Bernardo, Mission Valley and downtown, where atmospheric conditions caused the lettering to blur quickly.

The writing was sponsored by the “Jeff & Jer Showgram,” the morning show on radio station KYXY. The planes also spelled out “Jeff and Jer.”

My 11-year son’s old best buddy, the child of my best and perhaps most liberal friend, knew exactly which “Bob” was being asked to surrender, and was so excited to share his story with me that he located it on the internet. This gives my Legal Insurrection friends an idea of the level of local news interest regarding our mayor’s latest scandal.

Yesterday, a 16th victim came forward….a great-grandmother who is a city worker providing information on senior services. The press conference she gave was heart-wrenching:

“My co-workers and I would laugh about it, at first,” Shannon said at a Thursday afternoon news conference. However, she said it got worse. Shannon said Filner grabbed and kissed her.

“I knew he was engaged and I felt very shocked,” she said. “On the day that Mayor Filner grabbed me and kissed me, I went home and cried.” Attorney Gloria Allred said Filner approached Shannon one time and said, “Do you think I could go eight hours, straight?”

Shannon said she was shocked and hurt.

“I was working and had to get myself together to continue my job,” Shannon said. “I went home and cried <again.”

However, there is a new hope for San Diego residents tired of this lecherous politico. City Attorney Jan Goldsmith, who Filner attempted to bully earlier this year by usurping a press conference, identified a section of the city charter that can lead to the mayor’s removal….for using city credit cards for personal purchases.

A memo released by the San Diego’s City Attorney’s Office Thursday could outline a way to remove embattled Mayor Bob Filner from office without a recall and within city charter provisions….

According to the memo, the City Council asked the city attorney to look at the charter and determine if there is a process on how to impeach elected officers. While there is no such provision, “an officer” of the city is subject to removal under Section 108 of the charter through a court process.

In the meantime, local businesses are taking matters into their own hands…so to speak.

[T]he 70-year-old former Congressman is very much unwelcome in Hooters.

Four San Diego-area branches of the national chain best known for having waitresses wear tank tops and tight orange shorts have posted signs saying that they would not serve Filner.

“This establishment recognizes that we all have political differences and we serve people from all walks of life,” the signs read. “We also believe it is imperative for people to have standards. The mayor of San Diego will not be served in this establishment. We believe women should be treated with respect.” 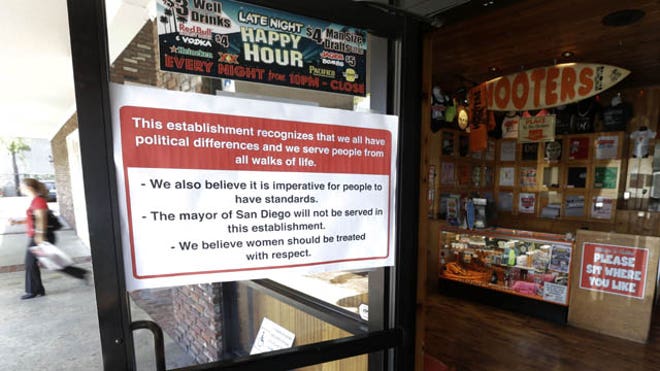 In the meantime, as citizens organize for Sunday’s Freedom from Filner March, here is the clip that inspired today’s protest.

I would assume that, like Weiner, he’ll be getting a nice pension and use of the gym facilities. And in a couple of years when things die down, running for office once again.

Rosalie: I would like to note that if Filner is removed, the San Diego city charter prohibits him for occupying a city office again. 🙂

Thanks. That’s good to hear.

Yes, he is a Democrat.

Filner’s debauchery would make for a “better” more telling mini-series than would a Hillary commercial. This kind of mysogyny needs to be revealed and talked about for it is.

I’m not usually a big fan of silly radio-station stunts, but

THAT IS TOTALLY AWESOME, DUDE!!!

Upon seeing the sky-writing, my first thought was concern for the dozen or so paranoid schizophrenics named Bob in a town the size of San Diego.

Interesting. He can be removed for misuse of a public credit card, but not for sexual harassment? Where is this happening again? Oh right, California.

the Pols write the recall rules. Any idea on why it’s difficult to get one out of office?

Given that Filner and his spokespeople have presented his behavior as the result of a mental health condition, might he not be able to sue Hooters for discrimination under the Americans with Disabilities Act?