It turns out that when Democrat Bob Filner left the U.S. Congress after being elected San Diego’s new mayor, he brought Washington, D.C.’s sense of teamwork and fair play with him.

The San Diego Twitter stream was busy with events associated with the mayor crashing the press conference of our City Attorney, Jan Goldsmith: 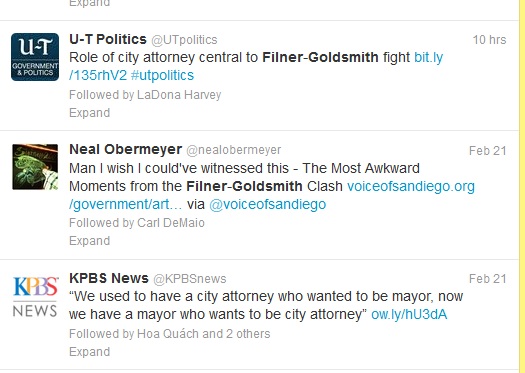 Voice of San Diego writer Lisa Halverstadt reported on the most awkward moments from the Filner-Goldsmith clash:

The city attorney called a last-minute press conference on Wednesday to respond to the mayor’s call for a new tourism marketing deal. ..

Filner showed up at the gathering to criticize Goldsmith for updating the media ahead of the mayor and City Council….

Goldsmith felt the need to respond. It was his press conference, after all, so he returned to the podium.

“I hope in the future we’ll know about these issues and get consulted in advance but if I read them in the newspaper and they’re wrong, I have to comment on them,” he said.

“I have no obligation to inform you of any policy decisions I make,” Filner shot back.

Goldsmith emphasized that he serves the city and is an “independent, elected office holder.”

The good for Goldsmith is that he was elected by the people, so Filner can’t fire him. I suspect if the mayor continues these tactics, Goldsmith will win reelection handily.

And so the same politician who menaced a Dulles Airport worker and taunted an Immigration and Naturalization Service guard while a congressman has kept in character — first as a bizarrely abrasive mayoral candidate and now as mayor.

Hijacking the City Attorney’s press conference is just the latest example of Filner’s bully-pulpit. Recently, the new major exploded at a fellow Democrat on the City Council over misunderstandings about appointments to a regional board during a council meeting.

Additionally, and as I anticipated, Filner is working to completely undercut two conservative measures, managed competition and pension reform, approved by San Diegans.

The silver lining in this news:  At least his damage will be more localized, so the rest of the country doesn’t have to suffer as we do.

After watching the video of the “unprofessional” and “unhinged” press conference invasion by Filner, one of our San Diego pundits places the chances of the 70-year old mayor at 50 percent. Frankly, I think he will stay for the full four years; but, here’s to hoping!

Now that the Democrats are in charge of the mayor’s office, Dewey offers a chilling look at where San Diego is probably headed (but with more sunshine).

They voted for him. I hope they enjoy the ruin he brings. Typical Democrat.

Seeing DeMaio lose was more disappointing to me than seeing Romney lose. DeMaio worked hard, and he’s done some very good work here. I had higher hopes for my fellow San Diegans.

City Attorneys advise mayors on legal matters. If the mayor doesn’t inform the City Attorney of policy decisions, they mayor is a complete idiot, and should be recalled for gross negligence in due dilligence of legal matters pertaining to the city.

Let me clarify my comments, If the Mayor doesn’t inform the City Attorney of policy decisions, then the City Attorney cannot provide proper legal advice concerning those decisions. It is in this regard that the Mayor is at fault, and ought to be recalled for gross negligence in regard to the city’s legal obligations.

He brought in Lee Burdick – his own Atty/consultant – who previously ran against Goldsmith. No hostility there…

It’s becoming clearer and clearer that Democrats elect those most like themselves. They will have no problem having this doofus as their leader.

San Diego is changing for the worst. And this is reflected in it political choices. As for Filner … a “nothing,” and that is giving the benefit of the doubt.