knowing full well they never will.

Pfc. Bradley Manning faces up to (reduced to 90 years max) in prison after recently being found guilty of charges of espionage and theft for his role in providing classified information to Wikileaks.

Progressive organizations have been circulating a petition to allow Manning’s supporters to take turns serving part of his prison time in his place. 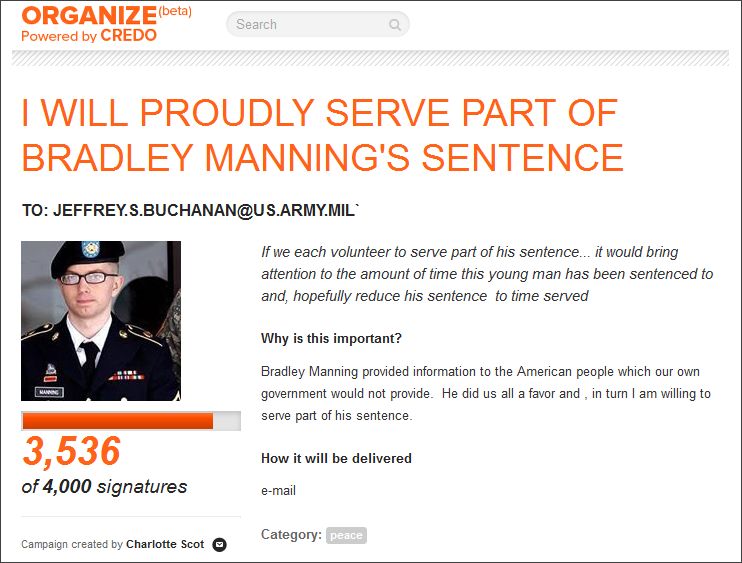 I’m fairly certain that in the United States it is not legal for a person to serve the prison time of another individual convicted of a crime.  You might get away with that in China, but not here.

It’s easy to volunteer for such a thing when you know there’s about zero chance you’ll actually be called upon to fulfill that promise.

So, clearly this is nothing more than a PR stunt.  Pretty much what you’d expect from CREDO, whose claims to fame include getting Andrew Breitbart kicked off ABC’s Election Night Coverage.

Imagine what they would do for a Klondike Bar.

Back in 2003, just before the Iraq War, virtually all human shield volunteers fled Iraq when the discovered the United States had ever intention of still bombing the targets they planned to occupy.

I suspect these folks are cut from the same cloth.

The US intended to bomb the places Saddam intended to put them, he was not about to allow them to choose where they were going to be.

Yes indeed. Those rubes thought they were going to be ‘guarding’ baby milk factories and Saddam instead had them standing outside of armories.

Let’s tell the volunteers ‘1 year minimum segment, served in Ft Leavenworth, KS, and oh by the way Manning will be in the cell next to you, because ten people volunteered for a year each which means he still has 89 yeas to do himself.’

I’d even let him earn 10 years off for good behavior during his sentence. That would put his first parole hearing at about age 107.

With all these volunteers, would I be wrong, un-Christian and cold-hearted as all hell to wish that Manning had received the death penalty?

Okay by me. If Manning dies in prison they can finish his sentence for him.

Just for giggles, someone should dress up as an Army colonel, complete with accompanying MP’s in white helmets and knock on some of these morons doors. Tell them they’ve come to take them off to Jail for their portion of the sentence.

Make sure to video the shock and the tears when they think their promises are about to be taken seriously.

[…] – Geography is hard. (No, Savannah is NOT a Gulf port…) – Groupies. – Don’t like something? Pass a resolution! That’s almost as good as a strongly worded […]