California television station KTVU has reportedly fired several employees over its cringeworthy mistake nearly two weeks ago, when it was duped into airing the obviously fake names of Asiana flight 214 pilots.

From The San Francisco Chronicle:

KTVU-TV has dismissed at least three veteran producers over the on-air gaffe involving the fake names of those Asiana airline pilots that became an instant YouTube hit – and a major embarrassment to the station.

A summer intern at the NTSB who had confirmed the names to KTVU was also previously let go from his job over the ordeal.

Brad Belstock, one of those reported to have been terminated by KTVU, had deleted his Twitter account shortly after the erroneous TV report first aired, but not before tweeting his apparently horrified reaction upon realizing the gaffe. (Tweet screen capture credit, Matthew Keys). 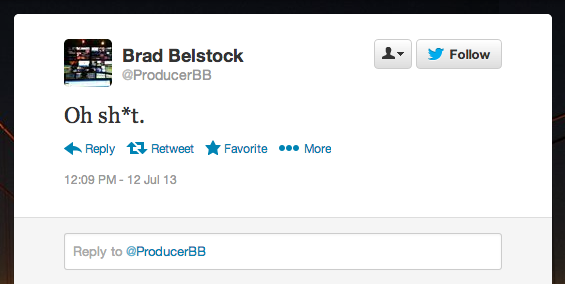 Since its viral catastrophe, KTVU has continued to deal with the ongoing fallout.

First the station apologized publicly.  But apologies weren’t enough to stop Asiana Airlines from announcing (ludicrously) that it would sue KTVU over the false report.  Asiana eventually came to its senses and reversed that decision. And most recently, KTVU has been trying to memory hole the videos of its blunder by filing copyright infringement notices to have them removed.

The SF Chronicle also explained, in part, how the TV station got those names in the first place:

Sources tell us the fake names – which had been posted on the Internet at least two days before – came to the station via e-mail from an expert source who had provided information to the station in the past.

I wonder if the “expert source” who emailed the station found the names in the same places I found them online.  KTVU never did respond to my inquiry on the matter.

IMHO, this incident should go a long way for strengthening Fair Use provisions of the Copyright Laws. While they don’t wield the influence they once did, the words and actions of their reporters on air have the ability to cause benefit or harm to individuals and businesses. The media shouldn’t have a free pass to choose to memory hole what they’ve broadcast in the past.

This was funny and no real harm was done. Rather than try to bury the episode, the station should have taken a self-deprecating approach and laughed it off.

Will firing at the NTSB, the source of the fake names, follow? If not, why not?

The story says they fired the intern. I say fire the idiot who gave an intern a job dealing with the press.

Yeah, that’s more what I had in mind, Trooper; the intern was probably temporary anyway. Who decided to let an intern publish to the media without oversight?

You would think more big shots would understand the Streisand Effect by now…Wikipedia is free, guys

This proves, without a doubt, that people have become so politically-correct, so unquestioningly accepting of the aberrant and weird, that they will believe anything.

Elemental Truth 504-B: Using “good judgment” is NOT the same as “being judgmental”, but the Wacky Left sees them as the same thing.

And:
“Mind like parachute – only function when open.”
Charlie Chan at the Circus (1936)

Firing these individuals is their second gaffe. You can’t close the barn door, so this accomplishes nothing. I suspect these fired individuals are now a far better bet for accuracy in reporting than many of those in the major media who have not been stricken with public humiliation over their laziness and slack-off fact checking.

These are “veteran” producers. In freaking SAN FRANCISCO, no less. Annoyingly proud bastion of multiculturalism except for straight white guys. Full of Asians of one kind or another.
IOW, these folks were among the best journalism has to offer, by virtue of being “veteran producers” and thus experienced, and in SF which is a potful of diversity and different names.
And they can’t tell joke names from real names? And they don’t know enough about Asian languages or names that they think obviously Chinese names are likely to be flying a Korean airliner.
The intern, I suspect, got the call and figured it was a joke. “shhh-yeah.” That counted as corroboration. Good enough for journalism.
Now, how about all the other folks who saw this crap before it went on the air? Nobody?
What’s the name of the phenomenon describing the potential to look at a howler in the paper, know it’s complete nonsense, but continue to believe the rest of the stuff? It’s all the journos have going for them now.
Stunts like this might wear out journalism’s last defense.

“What’s the name of the phenomenon describing the potential to look at a howler in the paper, know it’s complete nonsense, but continue to believe the rest of the stuff? It’s all the journos have going for them now.”

It’s called the Gell-Mann Amnesia effect, a term coined by the late author Michael Crichton. Patterico explains it, with the definitive quote from Chrichton, at the following URL:
http://patterico.com/2004/01/03/you-have-experienced-the-gell-mann-amnesia-effect/

Interesting. Will media organizations now fire all those hysterical journos who have been promoting the global warming scam? The ones who labelled Zimmerman white? And on and on . . .

Not true. Most Antarctic ice than ever.

These names appeared in a Jeep forum, and a couple other places before the on air incident. If they had just googled the names they would have found this out.

Instead they just repeated names they were given. I thought reporters were supposed to investigate. Like for example the backgrounds of the pilots. Did they have spotless records or were they accident prone? Googling would be the most minimal thing I would expect.

Aside from being funny, the whole thing points out something about the news. They are tools for anyone with an agenda, since they are willing to “just read stuff”.

I thought reporters were supposed to investigate.

The airline didn’t have any known ties to Republicans, so there was no need to investigate anything.

It’s a tragedy. Wrapped as a comedy.

While what, exactly, do these three people put on their resumes? I’d start by claiming I never worked at KTVU.

How cool is that?

Jayjerome
Even James Hansen, AGW hysteric late of NASA, is trying to explain with the most ominous sounding excuses why temps have been level for at least fifteen years. And both the Economist and the NYT have written articles on climate scientists “struggling” to explain the last fifteen years’ level temps.
I suggest reading WUWT. That will let you know what everybody knows and so you won’t waste your time.

Am I the only one who just didn’t think it was that big of a deal? I mean, they’re sinking people’s careers.

I did read a reminder above that this is San Francisco with a large Asian population. I guess that could put a lot of pressure on them. But still… blush, apologize and move on.

I don’t think I would’ve caught it myself without sounding out the names. (I did think the news readers usually did that before they went on the air. At least she had the presence of mind to prounounce “Fuk” as “Fuke.”)

beej.
The point about being in SF is not the pressure. It’s about the inevitable encounters with names of every imaginable ethnic group. IOW, given all that, HOW COULD THEY BE SO STUPID?
One answer is that they’re not multicultural at all. They glory in seventeen kinds of restaurants on the same block,but they only associate with WASPs, while giving flyover country–our motto, “keep flying, our airport’s broken”–a hard time for being chauvinistic.

Well, this whole story made me laugh for quite a while. I guess someone just exploited a chink in the station’s verification process.

As I predicted in the original thread, producers were fired. We’re all missing the point in our comments. A News Producer is the person responsible for the content broadcast – not the writer, editor, photographer, reader, promter operator – nope. THE PRODUCER.

All the business about Asian population, NTSB intern, mispronunciation, WASP-ishness – all irrelevant. The Producer has to know what is credible, who is reliable, how the story was sourced – everyting – because the PRODUCER is the one whose job is on the line.

I know whereof I speak.

Conserve.
The point about Asian population, etc. was that they shouldn’t have had to look twice or think even once to know this was bogus. They were swimming in an ocean of information which should have informed them even without having to check anything. I can’t think of a place so isolated that 99% of the population wouldn’t catch this instantly.
But this is SF.
Two questions: How can they be that stupid? Did they do this on purpose? Answer to the second is, obviously, “no”. Which brings us back to the first question.
How can they be that stupid?
Two other questions. As “veteran” producers, are they not more experienced, talented and knowledgeable than the rest of the folks at the station? Must be. And how many others at the station looked at this, even casually, and didn’t catch on? Could there be one person who caught it? If so, was anything said? If not, why not? If said, who told him to sit down and shut up?
Or did nobody at the station have an opportunity to see this as it was being worked up? Possible. Likely?

Today we have learned the source for the fictitious names was a joke email sent by a trusted and credible person who had a history of sourcing information to KTVU. That implies trust was misplaced and credulity was misapplied.

Nevertheless, in the described environment there are several suppositions:

1. The Producers did not follow established standards of review and cross-checking. Two reviews by independent readers should have caught the joke before air.
a, The Producers were doing something other than paying full attention to their professional duties.
b. The Producers were habitually sloppy and this was SOP.
2. The Producers had not established such procedural standards, thus permitting the joke names to air.
3. The newsroom was pressured to cut corners in an attempt to scoop its competition (and failed to follow procedures).

When things go well, Producers are nominated for an Emmy. Rarely is someone below below a Producer on the Union equity scale so nominated.

When things go poorly, then, Producers must be fired.

The final tweet from Brad Belstock tells the whole story.