This is turning out to be a case of one TV station that just seems determined to perpetuate the Streisand Effect.

KTVU, which was recently duped into reading off the very obviously fake names of several purported pilots from Asiana Flight 214, has apparently been trying to scrub its embarrassing blunder from the internet.

Two videos uploaded by the account MatthewKeysLive for use on The Desk and elsewhere were removed by YouTube after copyright infringement notices were submitted by KTVU in an apparent attempt to scrub the internet of the gaffe. Several videos that also showed KTVU’s error and subsequent apology were removed on other YouTube accounts.

Indeed, when I checked the posts that I’ve done on this story, the videos have been disabled. 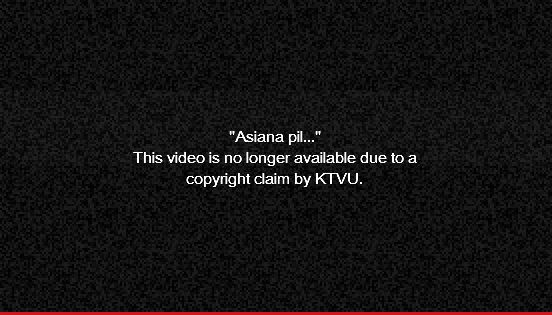 But as Keys points out, they’re still available through other YouTube accounts.  He also says his blog has submitted counter-notifications with YouTube citing copyright law’s fair use provision.  Given that the videos were used by numerous blogs and news outlets for the purpose of reporting it as news (as well as comment and criticism), I agree, I would think there’s an argument to be made for fair use.  I’ll let the lawyers in the peanut gallery weigh in on that one.

Who knows, though – Asiana Airlines did ultimately reverse an earlier decision to sue the TV station over the report.  Maybe that factors into why KTVU is now trying to have the videos memory-holed.

Regardless of KTVU’s reasons, it seems to me this will only draw more attention to the matter, since everyone knows, you never really delete something from every corner of the interwebz.

Save every Youtube video that you might want to watch again. I use the “UnPlug” add-on for Firefox.

I use Download Helper as I have found ot to work better on more sites and allows me to d/l the version of file (resolution/format) I want.
works well grabbing 1080 mp4 from youtube and other servers.

yup… one of my favorite helper apps. 😉

TV news show does something newsworthy, then claims you cannot use it because they own the news.

It gets funnier every time I see it!!!

Once something is on the internet, it’s pretty much out of your control… forever.

You can copyright stupid? Who knew.

Son they’ll want to scrub our eyeballs for having seen it.

Hey, “you’re way too low” may become a circumcision joke, while we’re at it?

You want to scrub your racist RACIST LEFTIST BLUNDER?
(did I mention racist?)

You’re too late. Copies are everywhere and the internet is forever.

San Fran – the most intelligent city in America apparently. Where the newsreaders are stupid , the TV stations ignorant of the net & where rescuers run over plane crash survivors & kill them.

There is no question this qualifies under fair use, and the widespread distribution of the clip already might even put it in the public domain.

I understand why they are trying, though. YouTube and other video sites tend to err on the side of extreme caution with copyright claims, so even claiming it with no legal basis usually gets the video taken down at least temporarily. And it is unlikely news organizations or bloggers will spend money on legal fees to gain access to something they have already broadcast a week ago when it was news.

They probably know they can’t win, and can’t even get all the copies taken down. But they can make it a little harder to find the evidence of their stupidity.

Fair use is rarely clear cut, because it requires balancing the four factors in 17 USC 106. Nevertheless, I think it probably is Fair Use, since the purpose is commentary, posting is non-commercial, and posting it isn’t likely to affect the station’s revenue through reduction of revenues for this video.

I got one of those takedown notices from KTVU. It was signed by their attorney, Wi Su Yoo.

[…] that decision. And most recently, KTVU has been trying to memory hole the videos of its blunder by filing copyright infringement notices to have them […]