Morsi removed from power by military in Egypt

Morsi removed from power by military in Egypt

Although it’s been obvious this would happen, it now is official.

“We swear to God to sacrifice with our blood for Egypt and its people against any terrorist, extremist or ignoramus,” the military said in a statement. “Long live Egypt and its proud people.”

The army took control of state television and sent troops to parts of Cairo where crowds sympathetic to Morsi had gathered. Supporters of the president said democracy was being subverted by a military intervention, and the Muslim Brotherhood, which backs Morsi, said some of its leaders had been arrested.

Civilian political, religious and youth leaders were summoned to meet with the top generals and planned a statement later in the day. Mohamed ElBaradei, the former head of the U.N. nuclear weapons agency and a critic of Morsi, attended the meeting, as did a leading Sunni Muslim cleric and the head of Egypt’s Coptic Christians. 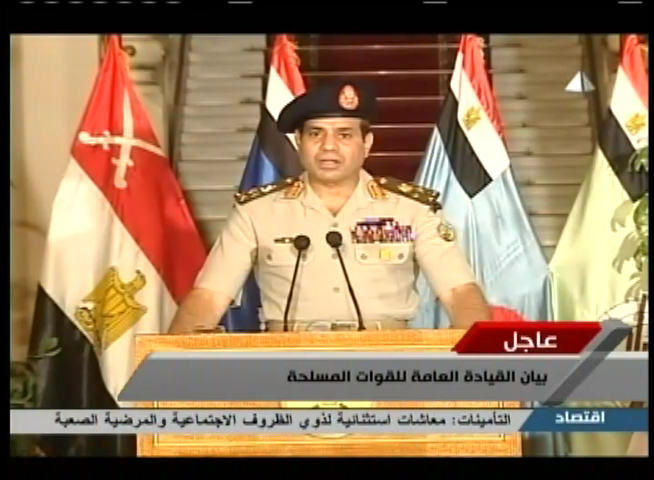 #US declines to criticize #Egypt's military following #Morsi ouster http://t.co/1byXegmzqp "We're not taking sides in this"

What if result of new #Egypt election is same as prior election? Try a third time?

Reminder: #Egypt is a nation of 80 million people. Not 20. My voice along with millions other was not heard nor taken into consideration.

Someone hand Obama a super-sized box of Kleenex!

What is interesting in the statements was the use of the word “technocrat”. It seems that most of the outgoing government had spent most of their time read the Quran all day and had no executive experience.

“No executive experience” .. hmm .. I’ve seen this somewhere else before today .. but where ?

I am also glad Israel is well defended.

And a case of vagisil.

I’m not sure which one is more impressive, but I’ll go with the golf handicap

And now Obama will immediately claim credit for “Arab democracy” and try to pretend he wasn’t cheering for Morsi.

Even if he was cheering, remember, everything Obysmal says has an expiration date.

That fireworks display has been going on for a very long time. Someone has been saving up for this moment.

Congratulations to the people of Egypt. I hope that, like love, self-government is better the second time around.

So you are saying that in 8000 years they have managed it just once & not doin so good.

[…] Morsi is no longer president, constitution is suspended. Chief Justice of Constitutional Court replaced Muslim Brotherhood leader and Barack Obama pal Morsi. A good sign is that Coptic Christians along with conservative Muslims were at the side of the […]

So, will Morsi be staying in the Lincoln bedroom, or in the one next to Michelle Mama? Ooooooo, maybe he’ll be in an interconnected suite with Val Jarret!

Not A Member of Any Organized Political in reply to myveryownpointofview. | July 3, 2013 at 3:50 pm

Michelle Mama lives in the attic.

I know it is true cause the Lie-Stream Media told me so.

It must really sting to be tossed out in a military coup and then everyone cheers and launches fireworks to celebrate.

They say that a little revolution is a good thing from time to time.

Well, it can’t be any worse than it was, and it could be a lot better.

Assuming things do get better, it will be interesting to see how the mob spins it into a great success for the anointed one…astute behind the scenes maneuvering perhaps? the reward for leading from behind? outmaneuvering of the Russians? the plan all along? they probably have a thousand other possibilities, from their army of spinners.

MSLSD must be in crisis mode right now. They need the answer asap. Obummer can’t have those idiots thinking about this stuff without a tether.

The spinning has already begun. Shep Smith mentioned on Fox that his information from the State Department is that we worked with Egypt’s military “behind-the-scenes.” The prescient one knew and acted!!

More bovine excrement from The Won.

This really must
1. Infuriate him
2. Scare the crap out of him.

If most Americans were that smart, we too could get rid of our “morsi.”

Will Gurli Barri get arrested too since they’re in mother Africa?

Huma Weiner, that sounds like a sex act that would make NAMBLA blush.

Seriously OT: Christopher Taylor’s blog, Word Around the Net, is finally back online. The new address is http://www.wordaroundthe.net/ but the old link will take you there.

I mention this not only because I like his site, but also because writing comments is restricted to Team Members (whatever that means), but I don’t see a link for registering or otherwise getting approval to comment. I was able to log in with my Google account, but I am told that I may not comment with this account.

If Christopher is reading this — or if any of the rest of you can comment on his site — please ask him to explain how we can become approved to comment.

He is just not into you.

He is too into me, he is, he is! He even wrote my name in a post today, reporting that comments are now fixed at his resurrected site.
http://www.wordaroundthe.net/2013/07/commenty-update.html

Oh huh I knoooooowwww. Men can be so fickle.

15 minutes before the Egyptian government’s announcement, WH spokesperson Jen Psaki “The WH is not taking sides”. There you have it.

that is true to barrys form . make no failure yours ,his . Course we all know how an what Egypt thought of barry .

Hmm… that means that neither Dear Leader, nor any member of his Administration has any need to communicate with, entertain, or meet with any member of the MB, or anyone linked to Morsi.

Let’s see who they try to sneak into the WH in spite of their public stance.

(When they think we’re not paying attention…)

Has Morsi indicated what he thinks about the Zimmerman trial?

yeah he did Henry……

He say if he had a son he’d be just like Gurli Barri, er I mean Tray-Von.

From Fox News: “Declaring himself Egypt’s only “legitimate” elected ruler, Morsi said he was willing to “sacrifice” his own blood to protect the presidency.”

As for the Muslim “Brotherhood”, don’t be surprised if they are all rounded up and taken to the firing squad…

“We swear to God to sacrifice with our blood for Egypt and its people against any terrorist, extremist or ignoramus,”

Pres. Snoop-Dog…
OK, you guys knock that off!!!! Put that back, right NOW. Don’t MAKE me wag my finger and stick my chin in the air at you…!!!

So Obama destabilizes Mubarak and gives Egypt Morsi. Then, as Morsi is about to fall he aids the Egyptian military in the coup.

General Dempsey doesn’t pick up no emergency phones. He’s dreaming of his days back at TRADOC.

..and actually follows through!!

This is impressive initiative demonstrated by the military, which is commonly known for its conformance.

It would appear that Egyptians were unimpressed with the strategy and tactics exploited to remove Mubarak from power.

I step out to get my hair done, and that’s when Morsi has toppled. I have a picture of Morsi under arrest and items from Egypt Daily News.

PS. The fireworks are a nice touch. It’s nice to see them celebrating there by doing something other than raping women for a change. It’s a nice omen for a better future, too.

Why we need to stay out of this country no matter who is in charge.

There was one small ray of hope:
http://www.buzzfeed.com/ellievhall/amazing-human-shield-forms-around-women-protestors-in-tahrir

[…] Legal Insurrection has a picture of the fireworks at Tahrir Square, which is a nice touch. It’s nice to see them celebrating by doing something other that raping women for a change. […]

with Morsi in teh Hoosegow,How long will it be before Hamas starts lobbing rockets into Israel… If Obama’s Foreign Policy were a Military Operation, this would be Classifked a “ClusterFuck”

Months ago I said here that Egypt’s mil would not allow MB to continue and that it is the only stabilizing factor in the country, and patriotic.

Put a million + Americans in D.C. against the MB-based regime and minders occupying the White House and civ bureaucracy and US mil will side with that million +, overtly.

Do you have any evidence for what you state? The British were only ever in Basra under limited conditions mainly to keep the iol port open.

They did not have much impact in Bagdhad nor did they keep a post Iraq presence.

Brits after WWI. Even Saddam’s Army reflected Brit professional mil train up and that contributed strongly success of US train up during OIF. I don’t mean Saddam’s weaponry, which was Soviet, or fighting ability. I mean his Army’s professional knowledge and to some extent organization.

Professional mils swear allegiance to a nation’s constitution, not to a regime. US mil is about the only factor left in the Executive Branch who abides that distinction.

Egypt is another great success of our SCFOAMF president.

Bullshit. He’s a thief, not a president.

Such “overthrowing” is sometimes a good thing — for the people and for their posterity.

There is this Russian joke …

Lenin is in a railroad car traveling until the train get stuck.
Lenin says “get rid of the engineers and bring in the proletariat.”

The train starts to move again .. until it get stuck again.

By this time Khrushchev is in charge.
Khrushchev says “bring back the engineers, they knew what they were going.”

The train starts to move again .. until it get stuck again.

By this time Brezhnev is in charge.
Brezhnev says “pull down the shades and pretend the train is moving.”

… you got to ask when the Egyptians will opt to pull the shades ?

For some insight has to why things have come pass in Egypt, I recommend this article… http://pjmedia.com/blog/why-president-morsi-is-in-trouble/

Summary: Morsi lied to every ‘opposition’ faction (when Mubarak finally went bye bye) to gain the necessary votes to gain power. Once in power, he broke every promise, brought in the MB, and began construction of an Islamist State.

After 2 years of massive unemployment, growing shortages of food and fuel, a weak economy, and growing terror against non-muslims and secular opponents… enough was enough.

Baring outside intervention, Morsi and MB have gotten their one try for the brass ring. Take comfort in knowing that in this one circumstance, Morsi’s lies caught up with him.

Breitbart has a report that Morsi is now under house arrest.

Wouldn’t it be great if we had a way to arrest corrupt and incompetent political criminals? I can think of one I’d like to start with.

On the other hand, our jail space is limited, so it’s not really a practical solution.

Morsi and Obama both must go. Both are wannabe tyrants who trash democracy.

Now the pyramids will not become the no more Buddhas of Bamiyyan.

I have been writing about the crisis in Egypt over the past year. My latest post pretty much predicted what would happen. It’s the French Revolution model.

[…] Morsi removed from power by military in Egypt […]