Dan Bongino — future Congressman in MD-06 — delivered the keynote speech at the Convervative Soiree in Maryland.

You can check out CLASSIC VIDEO: Ronald Reagan’s 1986 Independence Day Address at American Glob, run by Aleister who also helps us at College Insurrection.

From Michael Yon (h/t a reader):

Related: Have you visited Elizabeth Warren Wiki recently? Ever?

Attached is a photo snapped at our local 4th of July parade (Chicago suburb). I think these guys are the same homegrown Occupiers that I usually see protesting across from our library every Saturday afternoon. They also had a placard that said something about keeping corporate money out of politics. However, they failed to have a corresponding one for union money and politics 🙂

Keep up the good work – 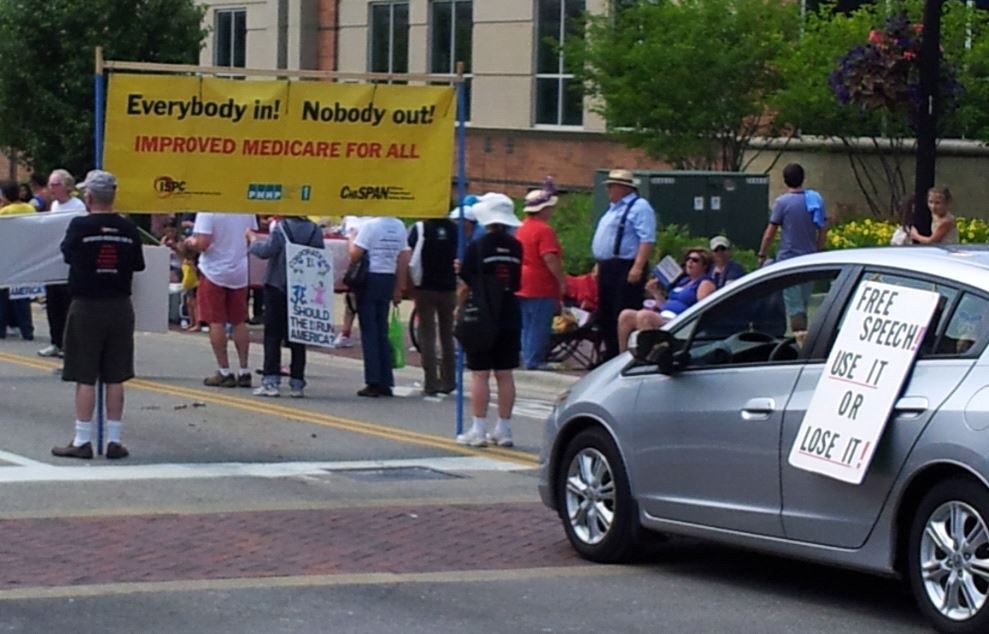 You know things are bad when you can’t even successfully implement your own bad ideas.

Why is this guy still tweeting at me?

Reason No. 971,520 why I’m not going to miss the Muslim Brotherhood running Egypt:

Well known broadcaster Ahmed Mansour has said that Adly Mansour, head of the Supreme Constitutional Court and who has been appointed President of Egypt by the army, is considered to be a Seventh Day Adventist, which is a Jewish sect.

I have not paid attention to the “Wendy Davis is Barbie” stuff, although a lot of people have paid attention. It’s so, ahem, beneath me.

UPDATE:  We had fireworks and music for an hour tonight.  The first time we did this was the night the Wisconsin Senate Recalls were defeated and Scott Walker won the recall.  It’s hard to capture on an image because of the movement, but here’s a screen capture: 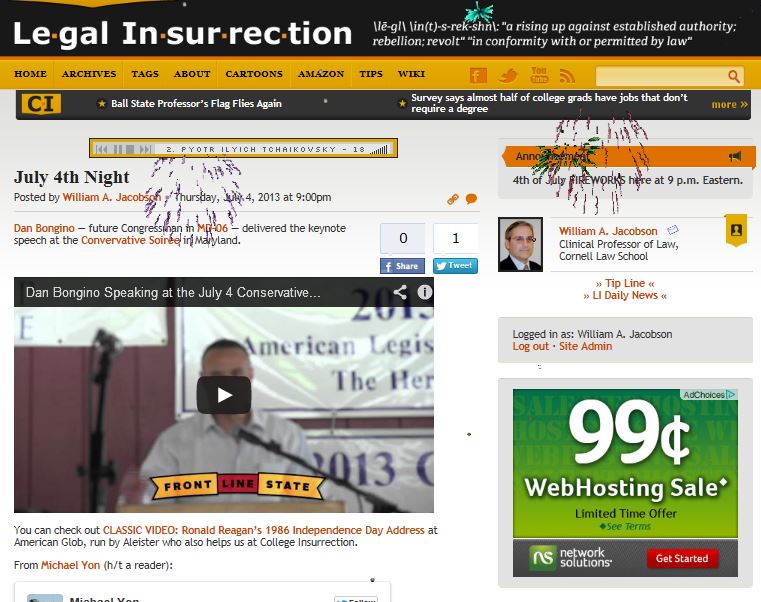 NICE! It’s like having the Boston Pops Orchestra in my home. Meanwhile, near the top of REDDIT is a 3rd Amendment case out of Henderson, NV.

3rd Amendment: Government not allowed to quarter soldiers in your home. It was also the Amendment argued in Griswold v. Connecticut. There are thousands of (wonderful) comments.

As a former Seventh Day Adventist, they are nominally a Christian sect (so unless your definition of Jewish includes Christians they are wrong) Nominally close to the Seventh Day Baptists (seventh day sabbath, baptism by immersion, and Christ will come again), with the rather major caveat of a Joseph Smith era (see Millerite Reformation) prophetess Ellen White. US SDAs primarily use White and supplement a bit with the KJV Bible. US non Elglish and nonUS SDAs use her to supplement the various bibles of thier language. Ellen White’s writings have been connected to plagiarism, serious plagiarism. Her “miracles” might be explained by a certain type of epileptic fit possible caused by a childhood injury of a type she did receive. The descendants of the founders 150 years ago were still running the SDA church a few decades ago.
That said, there are a lot of good people outside of leadership, with a firm support of the US even when other faiths were calling US evil and US troops “babykillers” and helping their sons escape the draft. (there was a lot of pride in Desmond Doss’ WWII MoH as a conscientious objector and they took efforts to not only teach respect for that, but to continue the direction of teaching in the kids) My Uncles were taken to the draft boards and the train station by a church elder (family said goodbye from home).

I am not SDA but have looked up their history, and yes this is correct information. The SDA grew out of the Seventh Day Baptists. Ellen White was a disciple of Miller. 🙂

Seventh-Day Adventists here are have high moral/ethical standards, modest lifestyles and do not eat meat. There are African-Americans in their groups. There is a SDA seminary in Huntsville, AL where one of our children live.

The Millerites split after the ‘great disappointment’ into four or five denominational groups. Advent Christian, Christian Congregational and others.

The ‘Burned Over District’ in NY State produced many religious sects, including Mormonism, and was the birthplace of spiritualism and feminism.

Looks like the fireworks were a bang-up success, Professor. Sometimes it’s difficult to get that software to run. Ya’ done good.

TODAY, FRIDAY, JULY 5 could be a horrific day in Egypt.

The Muslim Brotherhood Islamists are not going to give up easily and roll over and relinquish power to the relatively sane, non-radical, non-rapist, tolerant of Christianity Egyptians.

Friday is the Islamist’s (ha-ha) Holy Day. Their favorite day for committing the most horrendous kinds of atrocity and inhuman acts.

They leave prayers and attack funerals, weddings, rival mosques, police stations, military barracks, hospitals, restaurants, etc. They set bombs to go off then a bomb to kill the rescue personnel.

Nothing is too low down for these people. They traffic little girls and boys. They rape women, then stone them for being impure.

Pray hard and keep your eyes open. Egypt is not safe or free yet.

Times of Israel on the Muslim Brotherhood’s planned ‘protests’ today/Friday.

Notice his priorities. Which reminds me: Where was Obama when Christopher Stevens, Sean Smith, Glen Doherty and Tyrone Woods were being slaughtered (and worse)?

The White House hasn’t figured out how to photo-shop Obama into an empty Situation Room the night of the Benghazi attack.