An anti-coal activist was granted unconditional bail Monday after appearing before an Australian magistrate over his role in a hoax that caused a major coal company’s share price to briefly plummet.

Jonathan Moylan, an activist with the environmental group Frontline Action on Coal, was charged by the Australian Securities and Investments Commission with one offense of Australia’s Corporations Act for allegedly disseminating false information to the market.

Moylan was not yet required to enter a plea, but he has publicly admitted to being involved in the hoax and his lawyer says Moylan has willingly assisted in the investigation.

Earlier this year in January, Moylan allegedly emailed a fake press release to journalists, in which he targeted Whitehaven Coal over the company’s plans to develop the Maules Creek Coal Project.  Written on what was made to look like the corporate letterhead of Australia & New Zealand Banking Group (ANZ), the press release falsely alleged that the bank – one of the largest in Australia – had announced the withdrawal of a $1.2 billion loan to Whitehaven Coal.  The press release was emailed from a dummy account created to appear as though it came from ANZ, and it stated in part that the bank would not be investing in projects that cause “unacceptable damage to the environment, or social conflict.” 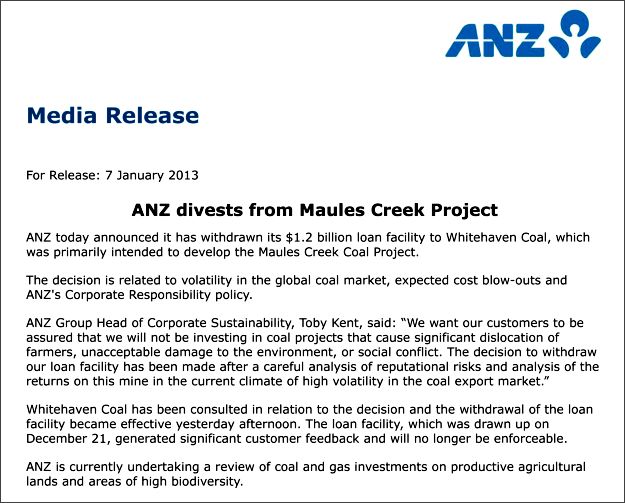 ANZ had made no such announcement.

But two news outlets – the Australian Associated Press and Australian Financial Review – both mistook the press release as authentic and reported it as news, triggering a market response that sent Whitehaven Coal’s stock price tumbling until ANZ publicly denied making such an announcement.

The press release included a phone number matching one from Frontline Action on Coal’s website, according to a January Bloomberg News article.  When contacted by Bloomberg News for comment, the man who answered the phone identified himself as Moylan.

A week after the hoax, protesters staged a demonstration outside a Melbourne, Australia ANZ branch in support of Moylan.  The anti-coal activists played dead – victims of climate change, they said – and had lain on the ground while members of their group carried some of them away in stretchers.

Moylan also spoke with media outlets following the hoax, describing how it was conceived and why he did it.

From the Sydney Morning Herald on January 8th, 2013:

The hoax was co-ordinated by Jonathan Moylan, a 24-year-old Newcastle man with a history of participating in protests against coalmines and an aluminium smelter in NSW.

He has taken part in a protest camp against coalmining in Leard State Forest – the site of the proposed Whitehaven mine, near Narrabri in NSW – for the past 158 days. The hoax was conceived and created from the forest camp, with its sporadic internet connection, he said.

He and and an activist group, Frontline Action On Coal, created the fake media release, using a real ANZ statement as a template, bought a website name and a dummy ANZ email address for about $25 on the internet.

When contacted by Fairfax Media, Mr Moylan initially posed as a corporate affairs spokesman for the ANZ Bank.

He later apologised for lying and tried to justify the hoax by saying it was worth it to draw attention to the environmental problems that the open-cut coalmines would probably cause.

‘‘We have been campaigning against ANZ for a while now because we believe that if customers of the bank knew their money was being used to finance coal they’d object to that,’’ he said.

Below is part of an interview with Moylan.

Moylan said the hoax was inspired by groups like the Yes Men, a left-wing group that frequently performs disruptive public stunts in the name of various social causes.

In 2009, The Yes Men notoriously (almost) punked the media when two imposters falsely representing themselves as spokespersons for the US Chamber of Commerce announced at a DC National Press Club press conference – from a podium bearing the US Chamber’s logo – that the Chamber had done an about-face on climate change.  They would’ve pulled off the stunt, had it not been interrupted by Eric Wohlschlegel, the Chamber’s Director of Media Relations.  The Chamber responded by issuing takedown notices on an imposter US Chamber website said to have been created by The Yes Men, and then later filed a civil suit against them for unlawful use of the Chamber’s protected trademarks and intellectual property.  The Chamber has since dropped the lawsuit.

The Heartland Institute also fell victim to a similar hoax at the hands of environmentalists, as I detailed in a post titled “Newsjacking” With a Dark Twist: When Hoaxes Infiltrate the News Cycle.

You might also recall a more subtle example from 2012 involving Pacific Institute President Peter Gleick and the Heartland Institute in what became to be known as “FakeGate.”

In that instance, an individual assumed the identity of a Heartland board member and, in a creative feat of social engineering, persuaded a Heartland staff member to re-send materials to a new email address for a board meeting.  Those emails and documents were later mixed in with a fake document that was authored to make it appear that Heartland was developing a “K-12 climate-denier curriculum.”  The entire package was then anonymously mailed to journalists and climate experts.

Jonathan Moylan is expected back in court in September.  He faces up to 10 years imprisonment or a fine of up to $765,000, or both.

“Journalists” seem to be easily fooled.

So called “journalism” has become a game of being FIRST (and screaming it at the top of your lungs) rather than being CORRECT.

The problem is that no one holds the so called “journalist” accountable for what they have said, or the damage that they cause in their dissemination of false information before they have the facts correct.

The basic function of journalism is to fill space. Checking on the validity of stories costs money and may render a space-filler unusable, so it isn’t done much.

As an Australian who lives somewhere close to Newcastle, and somewhat close to some of these coal fields, I really hope that Moylan gets to rot in jail over what he did that day.

He caused a massive loss to thousands of people when he pulled that stunt. It is the same as Insider Trading and he should be punished in the same way.

I shed no tears for Jonathon Moylan the extremist Marxist Watermelon aka Greenie.

Hoaxes are all fun and games till somebody gets hurt. I was part of a crop circle hoax in the 1980s and got tagged for trespassing and destruction of private property less than $1000 (soybeans). It hardened me as a criminal.

Unconditional bail? Unseemly generous given the potential 10 year sentence. I hope they took his passport.

Ironically he did shareholders a good turn. IF they sold up at $3.55 & not bought again in the afternoon bounce back .

Today the stock is at $2.22. This is not due to this action . The company has raised the 885 million for the mine but there are real environmental concerns in that it is prime agricultural land & that port facilities at Newcastle ( plus traffic to ) have affected the share price.

He has been very naughty but it is more like the canary in the mine.

( I don’t live somewhat near but smack bang in coal country) .