For many years Mandy has been at the forefront of breaking stories about connections between and among left-wing groups, working with Andrew Breitbart and others.

In late March, I asked Mandy to help with some research projects related to the Illinois-02 special election, and then the #OpIsrael hacking and the Boston Marathon bombing.  It was something of a “soft opening,” but over time Mandy has taken on more and more responsibilities here, and now is a daily contributor.  So I think the “soft opening” deserves a formal Welcome so readers can learn more about her.

Mandy’s background is more fully described at the “About” page of her own blog, libertychick.com, which she maintains primarily to provide research resources to activists.  Mandy also writes a daily “CyberBeat” column of social media and tech stories for Breitbart News’ “The Conversation.” You can and should follow her on Twitter at @Liberty_Chick.

Back in early April I promised that we would be bringing you research, analysis and activism you would not find elsewhere.  Having Mandy on board on a regular basis is a big step forward in that regard.

Mandy will be doing a “Research 101” series for readers to help empower you to become investigators and researchers.  (You may recall Matthew Knee’s “Polling 101” course, which readers enjoyed.)  Of course, in exchange for free tuition, you have to send your Tips to us!

Mandy recently appeared on a panel at BlogCon 2013 discussing “Stop Regurgitating content – finding the story that isn’t yet a story.”  The moderator was Brad Jackson and the other panelists were Lachlan Markay of The Washington Free Beacon, Mark Lisheron of Watchdog.org, Matthew Boyle of Breitbart News, and Glenn Hall, managing editor of TheBlaze.  We’ve pulled out Mandy’s segments for the video below, but you can watch the entire 45 minute-long program at the BlogCon 2013 website.

You also can listen to Steve Bannon’s interview of Mandy, who he called “one of the stars” of Occupy Unmasked in which she and others were featured, and which was released several months after Andrew Breitbart’s death. 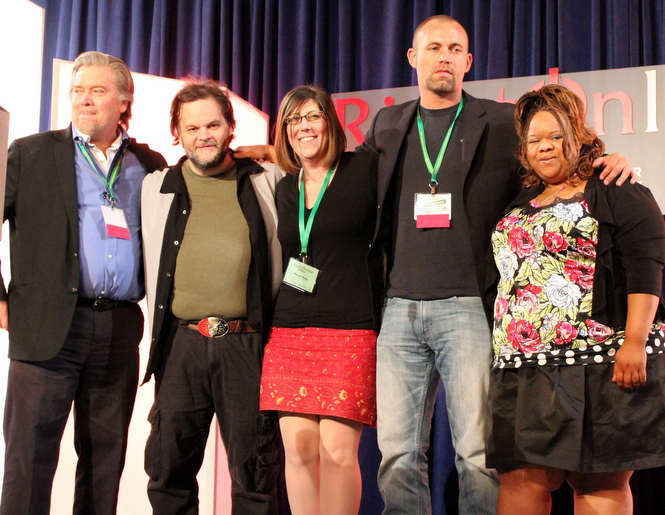 Smart man, Prof. She’s great at what she does and is a fine and decent person to boot.

Great news! I’ve followed Mandy for a long time and her work is impeccable. Professor, this is getting to be quite the classy joint!

wasn’t there a Kimberlin connection too?

Thanks, thought I had seen that screenname in the stories of that…well…person.
not want I want to call him but don’t want to shock you with my language 🙂

Another great addition to a very credible blog…

Glad to have you here.

Yo Mandy, nice legs..OOPPS! Uhh, err, great to have you… Christ, that don’t sound or look good either.

Welcome, Mandy! Of course, we’ve been following your posts already, thanks! A real pro.

I notice Bannon and Stranahan are still following my Ab-building routine – available at Havanuddabeer.com.

Mandy is such a welcome addition. Her work is top-rate, and for any of you that Tweet, she is a MUST FOLLOW!

Tweeted this, leaving the same comment here:
Just wanted to say thanks to all of you who’ve offered warm wishes & welcomes today. It’s very much appreciated. Very glad to be here!