I don’t know that @jeanassy says in these tweets, but it must have been really “good.” 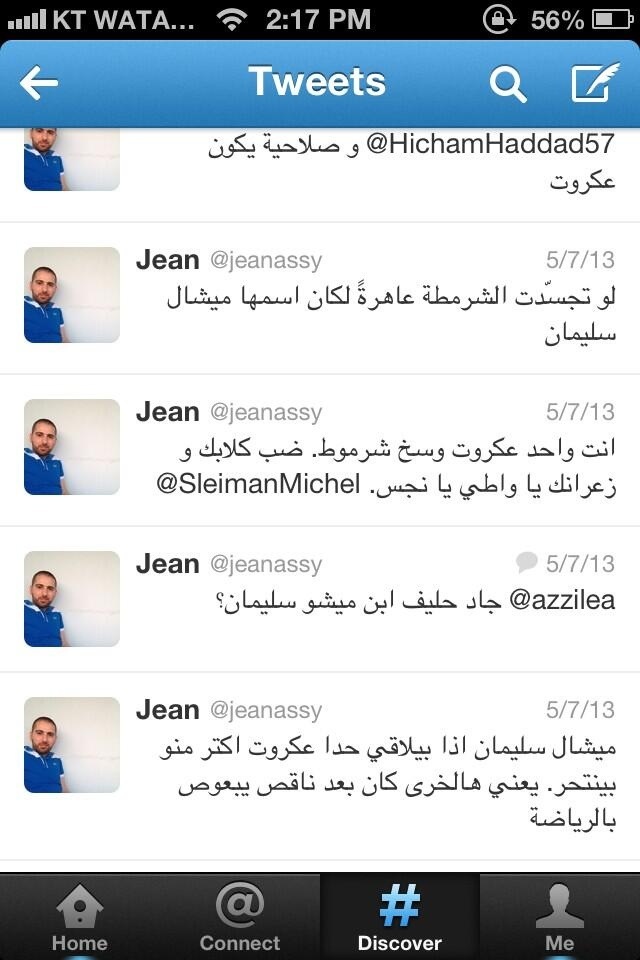 Assy, who describes himself as a web developer, allegedly is a supporter of the Free Patriotic Movement of Michael Aoun, which is part of the governing coalition along with Hezbollah and other parties.

A Lebanese blogger has been questioned by the Internal Security Forces for his insulting tweets and not as reported for criticizing President Michel Suleiman.

A careful examination of Jean Assy’s twitter account reveals swearing and name-calling against Suleiman which go beyond society’s morals and ethics.

Defamation is a crime according to Lebanon’s penal code.

The image grab of his twitter account published above and which shows his immoral tweets, is aimed at putting an end to the political reactions made by some parties under the excuse of defending freedom of expression.

In reality his tweets are morally degrading and do not fall under the framework of freedoms.

Politicians and not only the judiciary have a duty to preserve the post of the president out of respect for social values.

Assy was on Tuesday briefly seized by the ISF’s Office to Combat Cyber Crimes to question him on the series of tweets he has made. No charges were brought against him.

“Some people are attacking me for the “insults” I wrote, while I’m pretty sure they say things even worse about the president and others offline,” he has said in one tweet.

Jean Assy said he was summoned to the cyber crimes office in Beirut and questioned over Tweets calling the head of state an “akrout,” which roughly translates to “hooligan” or “delinquent.”

“I was called in for an investigation. I didn’t know it was about bashing the president. So I came today and was shocked to learn that it was about tweets I made a few months ago,” he told Al-Akhbar shortly after his release.

According to him the investigation lasted for about an hour, but he was then held for another 4-5 hours before meeting with a judge. The judge asked him to sign a document vowing not to criticize the presidency, and then released him without charge.

Here’s an interview with Assy, if anyone can translate, that would be great:

Hello! My name is Jean, Im a free Lebanese, I'll always be free. The way you supported me shows u r free as well. Thanks everyone

I admit my tweets were offensive,but i'm just saying what many of those who are insulting me are afraid to say. Grow balls before bashing me

Today i found out my car glass was broken after i left the police station. I tell them i got the message already. No i won't shut up

Those who see the main problem in #Lebanon is with the way i insulted the president & forget about all what's happening make me sad..

The president left away all #Lebanon's troubles and put efforts to try to put me in Jail. Wow, i must clap for you mr president!

Just to answer some people, i cursed officials at a certain time following security incidents,when most of you were saying كس اخت الدولة