Theory – Jay Carney wants to be the fall guy

Theory – Jay Carney wants to be the fall guy

John Kass predicted that Jay Carney would be the fall guy for Obama.

And that certainly would fit in with the defensive narrative whenever Obama fails at anything — it’s a messaging problem, not the message, and definitely not Obama.

As the administration can’t keep its story straight on just about anything, the messenger will be taken out.

That’s how it’s supposed to go.

Carney, however, seems to want to hasten the process:

“Do the questions raised about HHS Secretary Kathleen Sebelius and her efforts  to raise funds though the private sector for Enroll Now fall into that  category?” asked Major Garrett, CBS News’ chief White House correspondent, as  regards recent scandals to which the White House has been forced to  respond.

“We can go down the list of questions,” Mr. Carney replied. “We  can say: ‘What about the president’s birth certificate. Was that  legitimate?’”

It will go something like this: “I have resigned my position because the Republicans and some in the media have sought to make me the issue. It’s not about me. There is too much to be done to allow distractions regarding me to become distractions. You’re not going to have me to kick around anymore.”

Voters are concerned about the Internal Revenue Service’s targeting of  conservative political groups for unfair treatment, and over half think the  White House either knew it was happening or — worse yet –was actually behind  the operation.

That’s  according to a Fox News poll released Tuesday.

How bad is it? 47% of Democrats and 44% of Liberals think Obama knew or directed the targeting of conservatives. 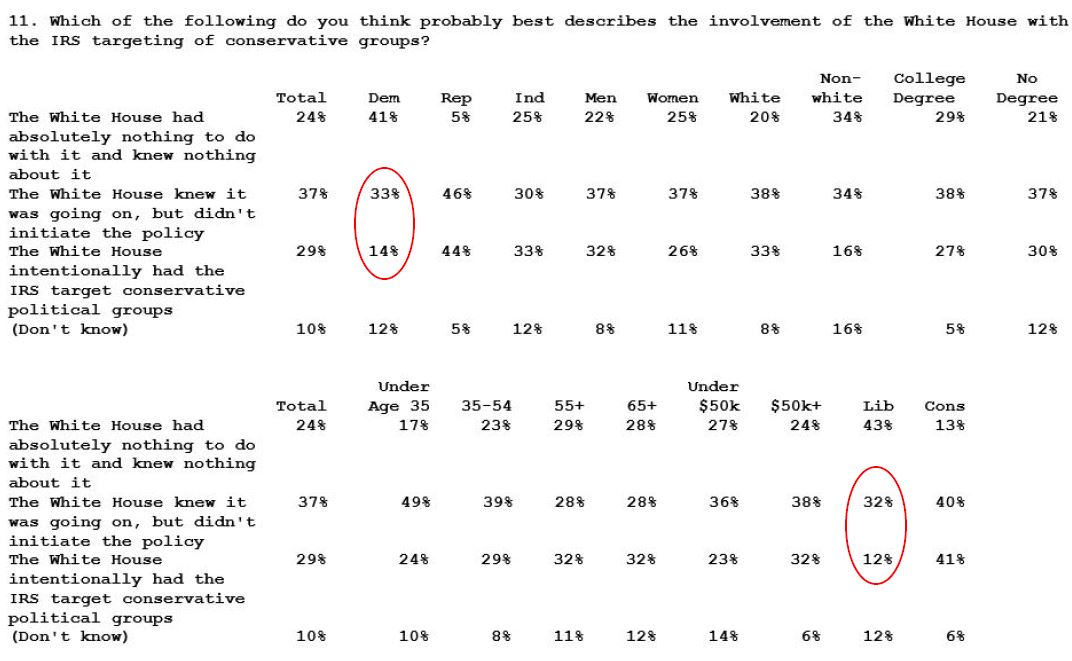 Carney = the “Ron Ziegler” of the OBOZO regime.
There is room for ONLY ONE #1 at anything. So move over Ron, Jay has taken over as the WORST EVER CORRUPT REGIME MOUTHPIECE.

[…] provided to the natural, weather induced, disaster. Still, for those of us happy at last to see some scrutiny of the Barack Obama Mud House there is some concern. The concern is that this natural disaster will cover-up the unnatural […]

And when Jim finally does “resign”, he will begin working for CNN as an “unbiased” reporter.

As for the part about only 47% of the democrats believing the WH knew anything – it’s the other 53% that speaks volumes. Maybe it should just read “53% of democrats have head stuck in the sand and are absolutely convinced the view is good”.

Going to a Carney Presser is a waste of time. it would be more amusing to hear from the chief liar.

It seems clear that Obama has been held at arm’s length precisely to shield him with plausible deniability, for the greater good. He and his people honestly do not think it reflects badly on his skills as Commander-in-Chief.

I think Obama kept Holder on, to keep a lid on, but also because Holder would make a great sacrificial lamb to purify the Obama administration as conditions warrant.

Democrats have their own worse than Nixon, who, unlike the lazy bum in the WH, was brilliant, and they don’t want to see it. These are the people who believe that it is the other side who is evil. They believe they are the good ones who have the nation’s best interests at heart. They know what is good for us. Now, they are having to reconcile Obama’s bad acts with their view of themselves and their ideology. Dude, it’s hard!

I say this about Jay Carney and ask how many other Executive Branch appointees can claim the same honor:

He has not gotten another human being killed by his actions or omissions.

Obama is incapable of allowing himself to be kept out of the loop in order to afford plausible deniability – his narcissism wouldn’t allow it. Remember, Obama believes he can do the job of any staff member better than that staff member can. Far more likely is he is directing all/most of this crap and is convinced his brilliance at hiding the trail back to him will protect him. It’s the sort of arrogance that always brings these would-be tyrants down. Prison is full of fools who ‘knew’ their friends would not rat them out.

After first pointing out that the word ‘if’ is the biggest word in the English language, let me say that if the House GOP stays on top of these scandals, sooner or later someone will rat out Obama and provide the smoking gun. They need to smoke out the conduit staff and turn them.

I notice that only 17% of respondents under 35 believe that White House had nothing to do with the targeting. Perhaps it’s the young people who are drugging the numbers of libs down. If so, what does the future hold for that upcoming Democratic majority I keep hearing about?

I don’t know if O’bammy directed the IRS targeting of conservatives but he certainly set the tone. The rest then fell into place.

He certainly has proven on numerous occasions that he is not a hands on guy when it comes to anything of complex nature regardless of its importance.

Don’t make the mistake that the White House was ignorant of the facts as their dirty paw prints are all over the crime scene. Perseverance will be key for this to play out.

I’ve wondered if Iraqis felt the same way about Baghdad Bob that we feel about Opie Doody.

[…] Theory – Jay Carney wants to be the fall guy (legalinsurrection.com) […]

Sorry, Jay, we’ve all enjoyed watching your show, “Doogie Howser: Boy Press Secretary” but it’s really too low level a position to be “The Fall Guy” for a real scandal. Maybe when you grow up, Sonny.

The disturbing thing about the poll is the roughly 41% of Democrats and Liberals who think Obama is completely innocent. The cover-up has been totally inept in this case, it’s almost as if after Fast & Furious and Benghazi the Administration thought they could count on the press to cover up anything. And yet these people won’t consider the possibility of complicity?

It goes to show just how delusional you have to be to remain a Democrat.

Can anyone give me a single good reason why that a-hole still Squeaker of the House?

[…] A May 18-20 Fox News poll shows younger voters are more skeptical about the Obama administration.  Only 17% of those in the under 35 category believe that the White House has nothing to do with the IRS […]