I know you hate it when I mention Meghan McCain.

I hate it too, it brings back memories of her bizarre and false claim that I made fun of her breast size. I didn’t even write the post at issue, Kathleen did, and the post did not make fun of McCain’s breasts. The whole thing was false, numerous people called her out on it, but she never retracted it. The incident was really strange, and served as a caution to me that someone with a big megaphone can do a lot of damage just because.

Which brings me to last night.

McCain tweeted out the Republicans were hypocrites for supporting Mark Sanford: 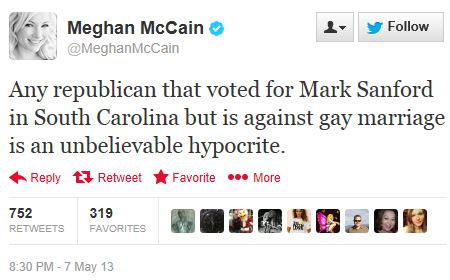 To which Iowahawk responded: 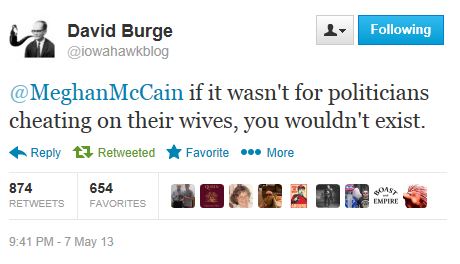 I think this response to McCain also is noteworthy:

Do you have ANY self-awareness, @meghanmccain? Shot: twitter.com/MeghanMcCain/s… Chaser: thedailybeast.com/articles/2009/…

“…the post did not make fun of McCain’s breasts. The whole thing was false…”

I think WAJ just accused this ditz of wearing falsies.

Who cares how small and misshapen her breasts are.
Why do sex scandals only matter when they are done by Republicans?

“Why do sex scandals only matter when they are done by Republicans?”

Because Republicans actually run on adherence to standards and values, not freedom from them as do Democrats. It is easy as an individual to violate the former, but impossible to violate the latter. That’s why dems can’t be accused of hypocrisy. A Republican individual’s misstep is ultimately used to condemn the standard, when in fact the misstep is only evidence of human imperfection. There’s nothing wrong with the standard.

See Alinsky rule, hold your opponents to their own standards.

Democrats have no standards, so they can get away with anything.

“…someone with a big megaphone…”

are megaphones a euphemism?

There he goes again.

What is it about Meghan’s boobs that create this Tourette’s-like tic in the Professor’s brain?

What were we talking about again?

Homosexual behavior and heterosexual adultery are two different problems. One is a betrayal of evolutionary fitness. While the other is a betrayal of trust. Neither behavior has any redeeming value to society or humanity.

For me, it’s not just the affair, it’s the way he handled it that make me question Mark Sanford’s sanity. This guy has treated his wife and children abominably, IN ADDITION to cheating.

Sanford’s “trespassing” charge, which Jenny agreed to settle now that she can’t sabotage his election, came when she didn’t respond to his calls. He went to her house anyway so their youngest son wouldn’t have to watch the Super Bowl by himself.

“I know you hate it when I mention Meghan McCain. I hate it too, it brings back memories of her bizarre and false claim that I made fun of her breast size.”

Yes, I remember the Professor’s unfortunate typo leading to that whole boobhaha … excuse me, brouhaha.

LukeHandCool (who marvels at the power a little “s” can wield when mistakenly tagged onto the end of a word. And who also marvels at Freudian slips)

In a detached, clinical sort of semi-disinterested way… uhmmmm…just, errrr… how big would you say those things are?

You know, for the factual record.

Beer Goggles Blogger Bill Jacobson is the one to ask.

The apple never falls far from the tree.

Meghan McCain is a mega-RINO and vapid airhead. Just like that decrepit turncoat Father of hers. I can hardly believe that there was actually a time when I admired John McCain.

Heck — I can hardly believe that there was actually a time when I admired the GOP and the RNC. Period.

GOP/RNC RINOs — just like the entire reprobate Clan McCain — are what compelled my to flush the Republican Party like the turds they have become and re-register ‘Unaffiliated’ [NPP – No Party Preference].

We need an American version of UKIP.

Iowahawk for the win!

We may live another 100 years and never see a better put down.

yes, that was epic (as my ten yr old nephew would say)

It’s true, then, that asshats come in female form too.

PS: What Ragspierre said (about the two) made me LOL. 🙂

Democrats Thank Donors For Wasting Money On Elizabeth Colbert Busch | The Lonely Conservative | May 8, 2013 at 8:30 pm

[…] me that’s a feature of his win, not a bug. Another feature – it gave people a reason to have fun at the expense of Meghan McCain. […]

So… I’m lost here. I should forgive Mark Sanford?

In other words: I should alter my behavior because it’s causing some sort of problem. Did I get that right?

If human beings can alter their problematic behavior, then how ’bout the creeps that cheat on their spouses alter THEIRS?!

Meghan doesn’t have to be consistent. She’s the Left’s Favorite Republican. It’s the same as not having to be able to write a coherent paragraph to be paid as a writer. What she lacks in skills and knowledge she more than makes up by having the correct ideology.

If Senator McCain’s daughter has a problem with people making fun of her breasts, all she has to do is lose weight.