The Boston Globe featured the post in its coverage of the debate over Warren’s proposal, Swimming in student debt?  The article included this screen shot for the ages: 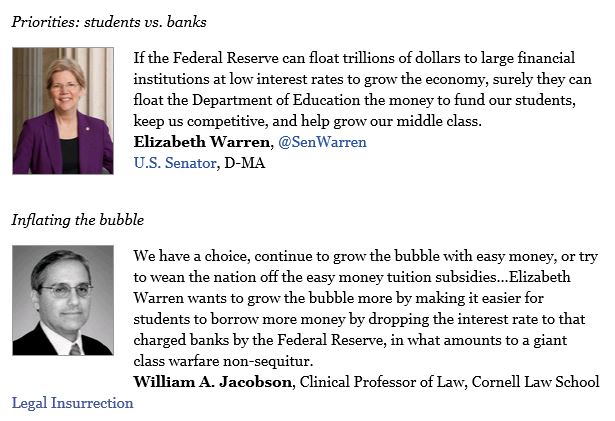 Others are joining in to puncture the initial media frenzy for the proposal.

From Meghan McArdle at The Daily Beast, Elizabeth Warren Wants the Fed to Get Into the Student Loan Business:

It’s probably true that some say banks need low interest rates to keep the economy growing.  But no one except possibly a lunatic has told Elizabeth Warren that banks are getting 0.75% at the discount window as a thank you for all the hard work they’re doing helping the economy.  Discount window loans are cheap for three reasons: the borrowers have assets and income that are easy to seize, the loans are quite short term, and the banks are required to put up collateral….

Students, on the other hand, are borrowing for a decade, and the only thing they’re putting up as a guarantee is their character.  How good a collateral is their character?  In 2011, 9.1% of borrowers had defaulted on their student loan within the first two years of the payment period.

The interest paid by the folks who don’t default is the only thing keeping this program from hemorrhaging money.  Elizabeth Warren proposes to cut that interest rate to less than the rate of inflation.

Of course, this isn’t really a serious proposal, in the sense that it has any chance of getting passed….

But passing this bill probably isn’t the point.  Rather, it’s a populist values statement: we like students, we don’t like banks.  As such, it’s probably going to be quite effective.  But only among people who don’t know much about the banking system.

From Danielle Kurtzleben in U.S. News, What Elizabeth Warren Gets Wrong (and Right) About Student Loans:

Still, it’s important to note that there is good reason why interest rates for students are higher than the discount rate for banks. One is that the discount window funds short-term borrowing, often for overnight loans. Student loans, as any debtor knows, last much longer than one night. And even the U.S. government faces far higher interest rates than 0.75 percent on its long-term borrowing.

“The flaw in Senator Warren’s logic is that these are long-term loans that are being presumably funded with longer-term borrowing by the Treasury,” says James Angel, associate professor of finance at Georgetown University’s McDonough School of Business. “So even though the t-bill rate right now is effectively zero, for longer-term debt the government is effectively paying several percentage points more.”

Even the U.S. government, the epitome of a trustworthy borrower, is paying around 1.8 percent in interest on its 10-year loans now, and nearly 3 percent on its 30-year loans.

In other words, Warren’s class warfare ploy of pitting Federal Reserve risk-free short-term lending to banks versus long-term risky lending to students was pure political demagoguery, much like the made-for-YouTube moments at the Senate Banking Committee and Senate HELP Committee hearings.

So much for being the brightest academic and Senator in the current congress. At least in one man’s opinion:
http://dailycaller.com/2013/05/09/dershowitz-tex-cruz-one-of-harvard-laws-smartest-students/

I wonder, does Warren hold any academe responsible for any part of the problem? Probably not. She IS the academe.

Liz warren is of the Paul Krugman school of populist economics – do whatever makes you popular at the moment, narrow frame the issue, use only stage one thinking and belittle and bemoan any opposition.

Is Elizabeth Warren now the worst thing to hit our financial system since Barney Frank?

What the hey is wrong with the people of Massachusetts–are they suffering from a type of political Stockholm Syndrome where they have a fondness for people who are trying to destroy them?

“it’s a populist values statement: we like students, we don’t like banks. As such, it’s probably going to be quite effective. But only among people who don’t know much about the banking system.”

Unfortunately, that’s a majority of the electorate.

The trend has been for Republicans to win older voters. Even Romney won that demographic despite having Paul Ryan on the ticket who Democrats and the media demagogued non-stop as wanting to throw granny over the cliff. Because Republicans tend to win with older voters, it explains why Democrats thought they could get away politically with stealing $700 billion from Medicare to partially pay for Obamacare.

I said a long time ago that with the older demographic moving away from them that Democrats will concentrate more on the youth vote. And we know that the way Democrats build coalitions is by using the coercive force of government to take away from A who earned it and give it to B.

Considering the lack of co-sponsorship on this bill, I doubt it stands a chance of success. But because older voters tend to vote Republican, Social Security and Medicare are no longer going the sacred cows for Democrats that they once were – and because Democrats win by using emotional arguments and bribery with other people’s money, we are going to see more attempts by Democrats to give stuff to younger voters, especially college educated ones who tend to vote Democrat.

And by the time the bubble bursts and the current generation of students wises up and the word trickles down to the next generation, Warren plans to be ensconced in the White House.

2. That federal housing programs led to disaster does not matter to the Left. They’re only interested in asserting a precedent for another disastrous program.

3. As others have noted, this isn’t seriously meant as legislation. It’s 2016 campaign literature.

4. Obviously what the country needs to remain competitive is more Latino Bisexual Studies majors who will go on to law school and lucrative careers as diversity enforcers.

Actually, a Latina Mother-of-Three who has gone on to Law School and cannot repay her debts, is featured in the WSJ today…

The WH proposes the government forgive billions of dollars in student debt over the next decade. Borrowers in the program would make monthly payments of 10% of their income after taxes and basic living expenses, regardless of how much they owe. Consider it sort of a… “living wage” payment plan which ends, and the balance forgiven, after 10 years.

Did you read that article???

Liliana hopes to get a government job paying $55,000 a year.

Maybe she is bisexual, I don’t know; she has a husband but she may also have a girlfriend.

We just went through the mortgage meltdown where banks were forced and incentivized to make bad loans. Now we have the most economically, and comically, illiterate Senator currently serving come along and tell us that we need to do exactly the same thing with student loans. You would think MA voters would be more sophisticated but history tells us otherwise. They almost always have a walking, talking non sequitur as their representative.

But then again, as a nation, we have the worst ruling class since Roman times.

You know how some congresscritters are damned for representing various private industries? Well, Liz Warren is Academia’s pet Senator,

Senator Warren is just setting herself up for her 2016 presidential campaign. This will play well to the hard left in the primaries.

But Henry, you say, these students won’t be free, just very low interest and easy to qualify for. Ah, but by providing them, the Dems rope in the college youth vote now, plus many of the parents of the youthful collegiates. Then, 20 years down the road when these students are in their 40s, they’ll forgive the unpaid loans, thereby roping in a lot of now middle agers, and all the while the current incoming students/parents are constantly being set up for entitlement.

It’s a Democrat voter factory, one of many.

Warren says if the fed can loan huge money to banks, why cant they loan money to students. Others here have pointed out that the bank loans are short term and low risk, while the student loans are long term and high risk. But I have an even better answer, dont do either one.