Israel bombs Syria — what we know and don’t know

Israel bombs Syria — what we know and don’t know

For the details at the start of the bombing, take a look at last night’s post, Reports – large explosions in Damascus (Update – Syria blames Israel), which has embedded videos and Twitter accounts.  The Twitter feed now is at the bottom of this post.

This morning various news reports confirm that there were several sites attacked, and there is little doubt that Israel was behind the attacks.  But as usual, the precise details remain sketchy.

An unnamed Israeli official told AFP the target was a shipment of Iranian made Fatah-110 missiles that were on their way from Syria to Hezbollah terrorists….

Other activists, for instance, reported that a blast that hit an ammunition depot in the Qassiyoun mountains near the city. According to a Syrian official who spoke to Al Arabiya, the Syrian regime uses its bases on the mountain to fire missiles at rebel targets in Damascus.

“The mountain is a very strategic site that oversees all of Damascus,” said the source. “There is a heavy presence of the Assad forces in the mountain because they are always on-call to launch any possible attack towards the people of the city.”

Reuters quoted activists who said they saw jets in the sky over Damascus and that a missile brigade and troop battalions loyal to Assad had been hit.

Claims last night by Hezbollah’s al-Manar television that an Israeli jet was downed appear to have been false.

There have been few reports of casualties.  Perhaps that’s because those killed may have been Hezbollah or Iranian troops, something Assad would not want to highlight.  One of the sites attacks reportedly was staffed by Iranian Revolutionary Guards.

It is unclear whether Syria will respond, notwithstanding a Syrian official declaring the attack a declaration of war.

Syria has a history of not retaliating for the obvious reason that Israel seems to be able to penetrate Syrian airspace with impunity.  One analyst terms the Syrian air defenses a paper tiger.  Notably, the Syrian Air Force was nowhere to be found, because it would have been destroyed in short order had it confronted Israeli planes.

Haaretz provides a map of Israeli strikes on Syria in the last several years: 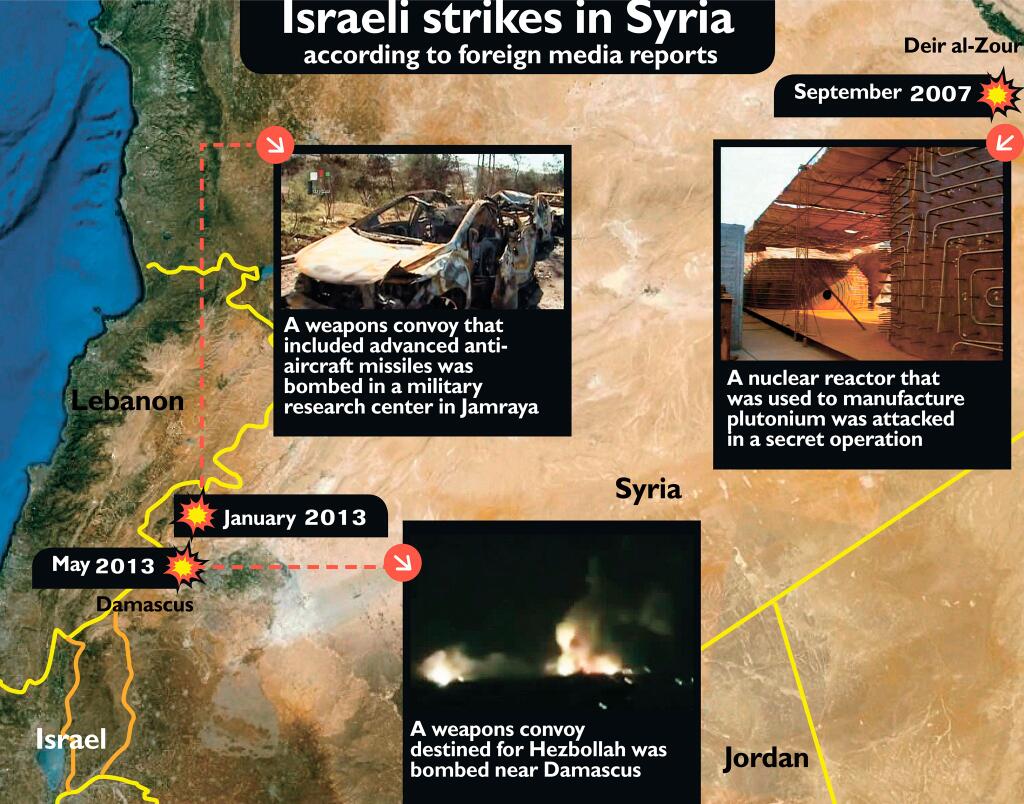 Ynet provides a description of the missiles likely used by Israel, the Spice 2000 and Popeye, and the Fatah 110 Iranian missile whose transfer to Hezbollah sparked the raids:

An autonomous missile, the Spice can be pre-programmed with a photograph of its target, and knows to hone itself in on it. The Spice is known for its destructive capabilities, its ability to perform accurately under any weather conditions, and its ability to remain neutral to attempts at disruption or deception by the enemy…

The missile has another benefit, in the form of a reduced radar signature. While the Popeye has a rocket motor which burns fuel and makes it detectable, the Spice glides toward its target using wings.

The Popeye is considered one of the big development successes of Israel’s military industry. Since its development in the 1970s and its introduction to the Air Force in 1985, it has been sold to foreign militaries including the US, India, Turkey, South Korea and Australia….

The missile head carries a television camera, allowing for it to be directed by its operator and locked onto its target, even after launching from the plane. Additionally, the Popeye’s internal navigation system leads it directly to its target.

A shipment of Fateh 110 missiles manufactured by Iran and meant for the Hezbollah was the target of the Israeli Air Force in an attack on Damascus International Airport on Friday, and a later attack at a military research facility north of the capital city, said Western intelligence sources Sunday morning, following the second strike.

The Fateh 110 is manufactured by Iran, and first came to view in 2001. The initial version was operational at a distance of 170 km, carrying a head of 250 kg of explosives….

Hezbollah members were reported to have visited Iran to train in the maintenance and launch of Fateh missiles, before returning to Lebanon. According to reports, the Hezbollah also received copies of the Fateh missile, manufactured in Syria under the sponsorship of Iran. The Syrian version of the Fateh 110, known as the M-600, is considered to be the most evident threat to the Israeli home front.

It is likely that the recent shipments of arms to Syria was of this version of the missile, which possess high accuracy at up to 100 meters or less of a target.

I wonder if Syria can get their money back for all those “advanced surface-to-air missiles” they bought from the Russians. They don’t seem to be working as advertised.

Given their documented abilities at #2 and #3, I wouldn’t be surprised that even if the Syrian air-defense systems picked up something, wouldn’t it be pretty easy to hack them and just not have anything show up? And how would the Syrians be able to tell the difference?

Anyways – those missiles weren’t going to make the planet a safer place, and neither were the people training to use them. It’s too bad that the Lebanese are prisoners in their own country.

Israel is very intelligent, very resolute, very self-sufficient, very charitable, and very, VERY benevolent. The Mossad are everywhere and nowhere at the same time. If Israel deigned it necessary to mitigate an impending threat with an attack across borders — then it was absolutely necessary and indisputably righteous. I know this in my heart of hearts. I know it down to my very soul.

And unless they inexplicably turn into what they are surrounded by and have always been surrounded by — a false prophet warlord worshiping blood-thirsty death cult perpetually trapped in the 7th century — I always will!

Israel had its rating downgraded from AA to A+ on Monday .

It has had to raise its deficit 50% with higher interest charges. – not an unnoticed irony.

It is a matter of survival that they be ultra efficient in any warfare. . This is one reason Bibi stood down the reserves – no shekels.

Meanwhile Turkey is in Jerusalem to extract its blood money this week.