So he made some mistakes.

Name an Attorney General who hasn’t made mistakes.

Okay, more than “some” mistakes: 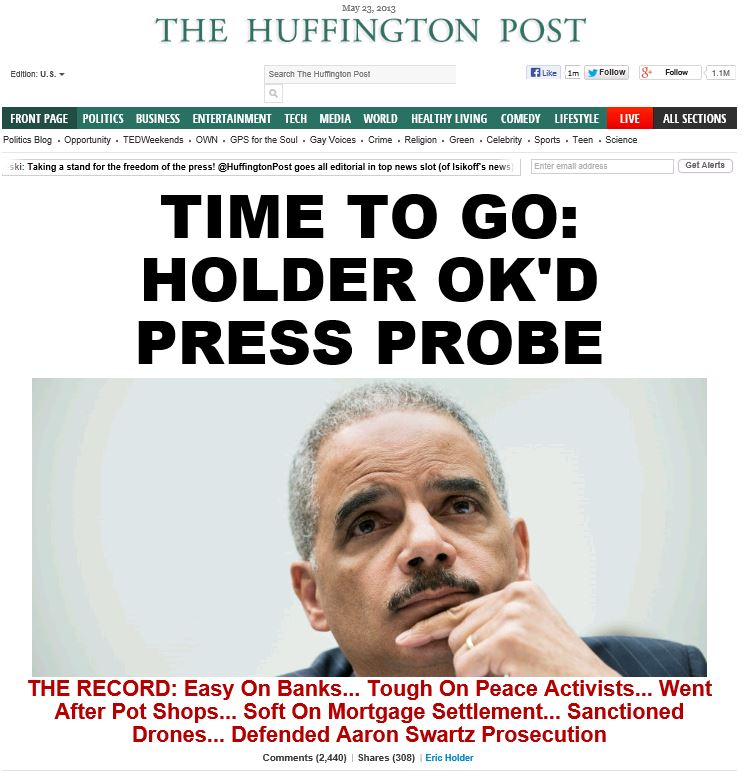 We were right all along, admit it, HuffPo.  Come on, man and woman up.

“..man and woman up” doesn’t begin to include all the possibilities there.

“Not that there’s anything wrong with that…”

this one may affect them, only reason they care.

The Puffington Host missed a couple of items in there “Ok maybe a few” mistakes. Fast and Furious, Philly new black panther voter intimidation, the voter intimidation against a black man in Mississippi, the Perez corruption in Mn. over the public housing scandal, the fact that he was held in contempt of Congress for his stonewalling and dissembling and his NO Nothing attitude about almost any controversy in the DoJ.

Holder is a significant bridge between the Obama and Clinton camps. There are at least a couple possibilities here. Firstly Holder is accepting his role as sacrificial lamb, in which case Obama has agreed to firewall Hilary! from any further damage. The second option is that Obama/Chicago has chosen to hypovehiculate Holder, in which case the fun is just beginning.

I always knew they were all racist…
/ sarc

Arianna, dahling, you once had beautiful eyes. Andrew had talent and vision. You’re still just a hack.

…and without Michael’s money, she’d be a counter girl at some third-world coffee house.

So holder openly lied just 2 days ago when he testified that reporters will not be targeted for practicing journalism.

Wonder what the left would do if this had happened under Booooosh??

Yea, we all the answer to that!

One thing I think is a bit odd:

Why did Holder approve the subpoena for records from Fox News but recused himself from a subpoena from the AP? What’s the sense in that?

Also, about the clerks who apparently never unsealed that information until after Obama’s 100 day honeymoon was over — those people work for the judicial branch, not the executive. It is staring to smell to me like someone in political channels, not in the actual government chain of command, is pulling the strings here. This stuff seems to be coordinated across branches of government from one or more party operatives.

In any other organization, such behavior would be tantamount to inviting prosecution under RICO statutes.

The only difference between the Obama Administration and the Lucchese or Gambino crime families is that the former takes long vacations on the taxpayers dime, outside of a Federal Prison. For now.

My main complaint is the things that he didn’t do like prosecute the wrongdoing for Fast and Furious, voter fraud and… Oh wait, he wouldn’t implicate the anointed one, right?

Same thing with Jon Stewart as HuffPo. How ’bout a simple apology, for starters?

He did a bit a week or so ago about how several at FOX were (finally) right on some issues. Then he did a little bit with him back to back with Megyn Kelly as “fellow warriors”, as if she is now “up to” his level.

NO NO NO Jon you schmuck. You are a sycophant attack dog that for years has taken good people like Kelly out of context, and with full smirk, skewered them in front of your ignorant audience. You have protected the left’s criminal behavior for years, and helped destroy patriots.

But Stewart couldn’t make himself apologize … that would be too much for him. He’ll keep that arrogance and ignorance … thank you very much.

Much of the country is hateful and bigoted toward FOX and conservatives, with a level of contempt and arrogance that matches Obama, thanks to guys like Stewart. They need a few years in sack cloth and ashes in repentance, while a thousand “civil servants” need a decade in the pen.

Holder hasn’t made many “mistakes”. A mistake is when you have good intentions and screw up.

Eric Holder has done something other recent AGs have failed to accomplish: making John Mitchell look honest and apolitical by comparison.

Holder is not going anywhere.

He could go crazy, blame Bush for hanging Sadam, press charges, start wearing a pink tutu and Mickey mouse ears and order Dr G the abortionist serve his time in a half way house (for the good of the neighborhood) and the big O would still say “he has my full confidence”

I used to think John Ashcroft was the worst Attorney General, ever. But at least he had sense enough to listen to smart people doing work for him on a few major issues.

Eric Holder doesn’t even understand the legal basics: the definition of “unprecedented” comes to mind, and more important, the responsibility to read his own mail. The man doesn’t even know that there is such a thing as preparing for a meeting. That he continues to serve at the pleasure of the President speaks volumes about that President.

Yeah… but where does Huffity-Puffity want him to go?