Claims of widespread damage are bluster so far

After the launch of #OpIsrael at the start of the weekend, the cyberattack carried out under the banner of the hacker collective Anonymous continued unabated late into the evening and remains in full force this morning.  Anti-Israel hackers are claiming that hundreds of Israeli websites have been hacked or defaced.

It’s unclear, however, if #OpIsrael has actually been as successful as claimed, and there are strong indications it is failing to do any major damage.

To start, there has been criticism of some of the anti-Israel hackers’ targets, such as a website that helps children with Cancer.  While the site has been successfully defaced at least a few times, according to a post on its Facebook page, the optics of such actions clearly aren’t positive for Anonymous.  Noted “patriot hacker” The Jester sarcastically drew attention to that point. 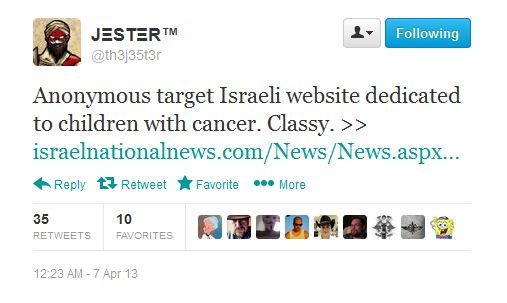 The Associated Press reported early Sunday morning that the operation had largely been ineffective thus far, according to Israeli authorities.

“So far it is as was expected, there is hardly any real damage,” Ben Yisrael [of Israel’s National Cyber Bureau] said. “Anonymous doesn’t have the skills to damage the country’s vital infrastructure. And if that was its intention, then it wouldn’t have announced the attack of time. It wants to create noise in the media about issues that are close to its heart,” he said. […]

Israel’s Bureau of Statistics was down on Sunday morning but it was unclear if it was hacked. Media said the sites of the Defense and Education Ministry as well as banks had come under attack the night before but they were mostly repelled.

The Jerusalem Post reported Saturday that #OpIsrael had backfired in other ways, largely due to such counter-attacks.  While Anonymous has claimed defacements to numerous Israeli websites, few of those sites appeared to actually be down, at least not for very long.  In many instances, the damage had been quickly reversed by the pro-Israel hackers, some of whom also defaced the OpIsrael website with positive historical facts about Israel and set the site’s music to “Hatikva,” Israel’s national anthem.  [UPDATED NOTE:  the authenticity of this particular OpIsrael website is in dispute.  Times of Israel reports that a group called Israeli Strike Forces actually purchased the domain as a tactic in its counter-attack.] 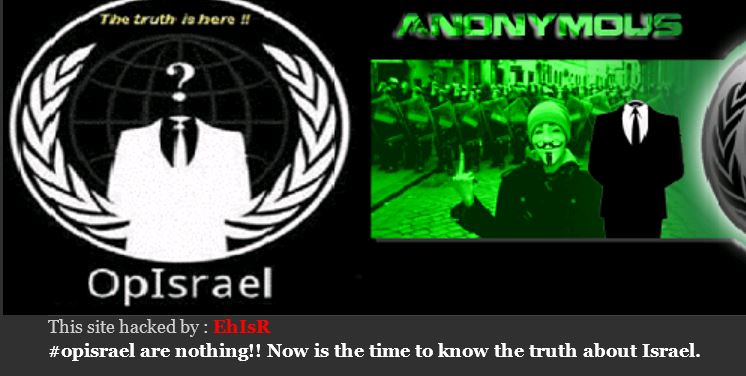 Other claims portrayed by Anonymous as current actions quickly made their way across social media, but with some simple fact-checking, turned out to be complete duds.

For example, this tweet from prominent Anonymous Twitter account @YourAnonNews, which has over 918,000 followers, claimed “Israeli deputy PM’s FB, Twitter accounts hacked, filled with pro-#Palestine messages.”  In fact, the Russia Today link to which the tweet directed was actually about a hack that occurred in November, 2012 during the initial #OpIsrael attacks. 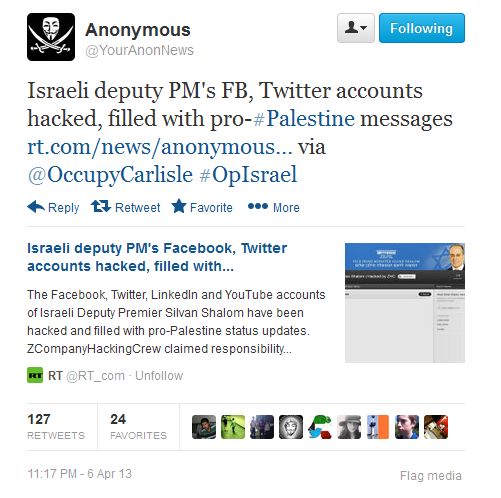 Meanwhile, anti-Israel hackers participating in #OpIsrael grew concerned about what they believe to be counter-measures taken by Israel to defend against attacks.  Several tweeted ominous warnings about potentially planted Trojans and malware on hacked websites. 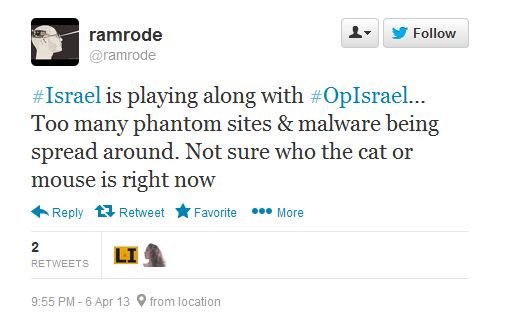 Perusal of the #OpIsrael timeline also revealed several tweets claiming arrests of some hacktivists (i.e. see here, here and here), though no independent confirmation of such has yet been obtained.

Despite the hyperbole and dramatic claims that can be seen in the #OpIsrael timeline on Twitter, in reality, it’s looking like this second go-around of #OpIsrael thus far may turn out much like its predecessor in 2012, in which Israel successfully deflected the majority of approximately 60 million hacking attempts.

It should be noted that Anonymous is a leaderless movement.  Anyone can carry out actions under its banner, and not all of Anonymous may necessarily be supportive of actions that are perceived as anti-Israel.  In fact, this author has previously had discussions with a few pro-Israel hackers who claim association with Anonymous. Admittedly, those individuals seem to be in the minority of Anonymous as a collective.

We will continue to follow developments in this story and will post updates as new information becomes available.

It’s appears Jew hating hacktards are as ineffective as we suspected. Though thet’re right on defacing a kid’s cancer charity.

I love the way these losers don’t think Mossad knows where they live. Cute.

Publicity stunt likely to suck in a bunch of bleedin’ amateurs.

Greetings Antisemitic Hacktivists of the World: we are Eponymous. Israel owns Israel.

What happens when hackers turn out to be just plain old hacks?

What is Hebrew for “u mad bro?”

The average business website is attacked once every three minutes. Any claim that these sites were attacked is obviously true regardless of anything that Anonymous did. I heard that Anonymous was going to try a massive DDoS. If that is true, then the appropriate report is to give the estimated bandwidth of the attack. Even a DDoS attack isn’t newsworthy unless it gets above 50 Gbps.

According to the Elder of Ziyon website, ” Actually, it looks like OpIsrael.com was their site, and they are lying about it now”

[…] Legal Insurrection has a good round-up of the attacks and counter attacks. […]