Last November, a faction claiming association to the hacker collective Anonymous launched #OpIsrael, in retaliation for Israel’s strikes on Gaza.

Earlier this week, those operations were resurrected in another wave of #OpIsrael that is scheduled to commence on April 7th, the date of Holocaust Memorial Day.

The Op Israel account on Twitter has already begun tweeting updates on alleged hacks on Israeli targets as of Saturday afternoon.  And YourAnonNews, a high profile account associated with Anonymous, is also tweeting out Internet Relay Chat (IRC) channels associated with the operation, as well as updates on current hackings and defacements.

Several videos promoting the operation have been posted on various websites across the internet, including this one picked up by Hackers News Bulletin.

Not to be outdone, however, presumably pro-Israel forces have also launched their own counter-attacks.  By Saturday afternoon, the home page for the OpIsrael website had been defaced to include historical facts about Israel that dispute much of the messaging that is typically posted by anti-Israel hackers.  [NOTE:  the authenticity of this particular OpIsrael website is in dispute. See emphasis below.]

As of this writing, Israeli sources are denying that the attacks have been effective so far and that Israeli hackers are hitting back:

Meanwhile, Israeli hackers began to retaliate against the anti-Israel hack attacks, called #OpIsrael, with an operation of their own against sites in countries associated with the anti-Israel groups. A group called the Israeli Elite Strike Force over the weekend disabled dozens of sites in Pakistan, Iran, Syria, and several north African countries – and even acquired a domain name associated with the OpIsrael attack — opisrael.com. Instead of listing the sites anti-Israel hackers have defaced, that site features educational facts about Israel and the Jewish people, and a warning to anti-Israel groups that Israeli hackers were ready to fight fire with fire.

The Times of Israel issued these “Stay Safe” instructions: 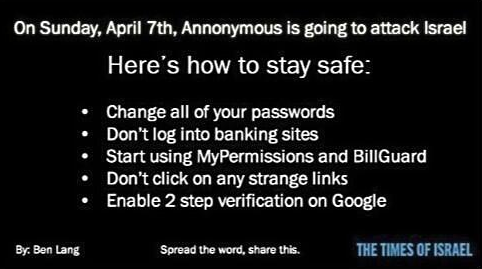 (A trends map posted online displays the prevalence and most prominent locations of where the #OpIsrael hashtag is being employed across social media.

We will continue to follow the #OpIsrael activities over the weekend, including counter-attacks, and will report new developments here at Legal Insurrection.

Below is Saturday’s statement in full from The N4m3le55 Cr3w (The Nameless Crew).  It is followed by a list of the hackers’ various targets in Israel.

Greetings Israel, We are The N4m3le55 Cr3w. As we have stated it has come to our attention that the Israeli government has ignored repeated warnings about the abuse of human rights, shutting down the internet in Israel and mistreating its own citizens and attacking its neighboring countries and breaking its treaties. Cyber war has been declared on Israel cyber space and you will see exactly what we are capable of Israel. So far we, The N4m3le55 cr3w, have gathered 600 websites and 100 plus servers we will be attacking. We will be attacking multiple banks, schools, businesses and of course government websites like Bank of Israel, Bank Leumi, Ministry of Foreign Affairs, Arabs for Israel, Hebrew University of Jerusalem, Tel Aviv University to name a few. That is just our targets. We can not speak on what the rest of Anonymous will be attacking but we can guarantee it will be in the 1000’s. If you have used your credit cards online on an Israel website, we suggest you check your bank statements in the near future. Anonymous doesn’t make threats, it makes outcomes but we are not terrorists like some news medias say we are. As for the foreign minister Avigdor Liberman and the Finance minister Yair Lapid you have brought great shame to Isreal. Expect us to have great lulz Avigdor Liberman and Yair Lapid, especially on social networks. Israel, it is in your best interest to cease and desist any further military action or your consequence will become worse with each passing hour. To the Israel government and the IDF, Anonymous has grown tired of your bullying, and now you will see the result of your actions. Do not Expect us prime minister Netanyouh and the rest of Israel, the internet hate machine is already here.

For We Are Legion.

We Do Not Forgive.

We Do Not Forget.

We will have updated posts tomorrow, including screen shots and an assessment of whether #OpIsrael ended up being anything more than an annoyance.

Are there no literate hackers out there? Imagine if Ian Fleming had come up with lame villains like these doofuses.

“For We Are Legion.

We Do Not Forgive.

We Do Not Forget.

Perfect. When you get anything divided by zero, you get either a big nothing, or an operational error. These are my intellectual superiors.

The hack on the OpIsrael page is quite moving. Go Israel! 🙂

One’s career prospects are bleak when one gets on the bad side of the Mossad. The are not as clever, untraceable or invulnerable as they think.

There is published, and fairly detailed, information about “Anonymous” — which is, my kids tell me, not a group but a meme. I suppose that means it is essentially a running joke carried on by whoever wants to do it.

That doesn’t save them. If you are on the Internet, and somebody with the right skills wants to find you, they can.

Divided by Zero. Yep. Good one. Most computers give a “Division by zero” error if you try that one. Sorry, they aren’t infinite, just arrogant.

My guess is mostly, young.

If I were a zit-faced Anonymous hacker, I would be cowering under Mom’s bed with a well-founded fear that some muscly Israelis armed with Uzis would burst into my basement “lair” to spread my neurons and glions all over the wall.

I doubt it will be so obvious. More like failed brakes, or a random public assault.

If you keep hitting Israel, sooner or later Israel will have endured enough and decide to hit back. And they are just the folks to do it, too.

Welcome, LibertyChick! I see the Professor wasn’t kidding when he said he was upgrading the site across the board.

Let’s pray that The N4m3le55 Cr3w keeps dividing by zero. I hope their IP masking has operational errors. And I am praying that they will leave behind an IP bread crumb trail to follow.

These attacks are acts of aggression against Israel and should be considered acts of terrorism/war. The U.S. should be responding to help our ally.

The UN, on the other hand, should just go home and scratch their heads on their own dime while watching Andy of Mayberry on ALgore supplied Al-Jazeera TV.

It is one thing to be threatening, but to be trite when you’re threatening signifies a tremendous lack of imagination. “We are legion” my rear end.

Israeli hackers will exorcise the legion.