Before you read on, to whom am I referring as the Outstanding Leader?

North Korea under its new, young leader Kim Jong Un, also known as the Outstanding Leader, has been threatening to start a nuclear war, and to start with Tokyo.

But don’t you dare call him crazy.  Or little. Or insult his haircut. 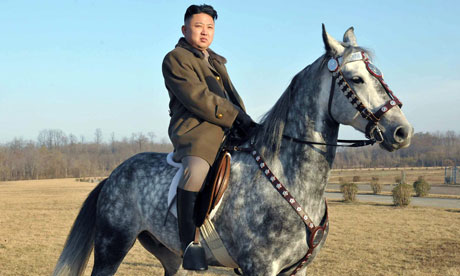 From Chris Roper in The Guardian, North Korea: let’s not resort to racism (h/t @BuzzfeedAndrew)(emphasis added):

It’s a happy truism. Scratch a politically correct liberal, and you’ll find a human being. And it appears that racism is the default state of being for humans….

Take North Korea, and the current hoo-ha about its threat to launch missiles against the US. It seems that some people think it’s okay to caricature Kim Jong-un based on his ethnicity, culture and appearance. Ooh, look at the little dancing fool with the crazy hairstyle! ….

Just because the North Korean culture is so utterly alien to much of the west, we allow ourselves to caricature the North Koreans and their leader. Admittedly, if you’re raised in a system of culture that doesn’t favour the theatrical and the hagiographic, you’re going to find the sight of prancing soldiers a little weird….

I’m not saying that North Korea deserves our respect, far from it….

So sure, it’s a messed up place. But that doesn’t make it okay to devolve to old patterns of jingoistic racism, and turn “North Korean” into another iteration of the terrible N-word.

Recently, the Washington Post ran a story quoting John McCain referring to “the crazy people” running North Korea, and there are headlines along the lines of WND.com’s “Diplomat: ‘Crazy’ N Korea deserves hard line”. It’s the kind of rhetoric that makes diplomacy difficult and aggression more palatable. I’m okay with calling Kim Jong-un an evil dictator, but not with a blanket statement about crazy people….

So when we make fun of the craziness of Kim Jong-un, we’re making fun of an entire belief system and culture, which is racism at its facile best.

Okay, maybe we can now call him crazy.

Just don’t call him a Nork.

1. Remember, if the North Koreans are provoked to take out a city or (with EMP) a power grid in the US or one of our allies, above all we must avoid a disproportionate response. 🙄

2. PC insanity is getting palpably dangerous.

3. There is an utter, deliberate failure refusal to get the concept of ‘enemy’.

4. The Gods of the Copybook Headings are getting closer.

If it were the average NoKO citizen, you could say that he was posing with dinner.

Chris Roper must approve of a lot of things we normals would find strange:

He is the offspring of man-sheep sex.

If I recall correctly, John McCain made comments on TV that he’s young, unstable, and ill-advised. It doesn’t get more insulting than that, to an Asian. The operative insult here is “young.”

To be brutally honest, I’d rather our government engage in this dance, by saber-rattling and then caving in to demands for humanitarian aid, rather than wind up at war with North Korea. North Korea isn’t going anywhere.

I don’t think anyone is going to do a preemptive strike but they have to take his threats seriously. There could be real problems if he makes the attempt and maybe if we didn’t react he actually would make the attempt.

Also we need to understand that this is exactly the kind of behavior we can expect Iran to start if it succeeds in setting off a nuclear bomb.

should we just sit back and wait for that too val?

i think you’re not thinking straight.

60+ years of babysitting.
the time has come to back out or destroy them.

yeah. I expect this from some brit. (oh was that racist too?)

don’t call that person with a bomb strapped to their chest and waving a gun and a knife around and threatening to kill every one present crazy.

That would be racist.

Translated:
Chinese comic shows an impish Kim Jong-un, standing on a pedestal and urinating on the United States, Japan and South Korea. Off to one side, China leans on its cane and says, “Stupid child, you’re asking for death.”

So this guy is threatening to start launching nuclear missiles but it’s unacceptable to call him “crazy,” huh? Screw Kim Jong-un and screw anybody who seriously wants to throw the race card at people for commenting on this dictator’s war threats.

What the hell is with leftists wanting to defend warmongering tyrants abroad anyway???

It was not leopard skin but still very outstanding.