CyberWar or Propaganda War? Or Both?

Hackers claiming association to Anonymous continued their cyberattack on Israeli websites throughout the day Sunday, a reprise of their 2012 operation dubbed #OpIsrael.

Official reports from Israeli authorities remained largely unchanged from earlier in the weekend.  While the attacks caused some minor temporary disruptions to some websites, no significant damage is said to have been incurred.

Israel’s Foreign Affairs Ministry’s website was temporarily inaccessible for a short duration, only seconds according to authorities.  And while a brief attack on the stock market was reported by news outlets, it denied the reports, according to a CBS article.

Various Twitter accounts in the #OpIsrael timeline were disseminating links to allegedly leaked user information said to be from Israeli bank accounts and other Israeli data sources.

Several online outlets are also reporting that the Leumi International Bank of Israel was hacked and user data leaked.  However, closer examination of these data files reveals that the records contain identifying information of US citizens, not Israelis.  This raises questions about claims that the leaks were associated to the weekend’s cyberattacks on Israel, or just previous leaks being recycled for publicity purposes.

The file said to be associated with the Leumi International Bank of Israel contains user IDs, clear text passwords, email addresses and street addresses of individuals in the US, the entire list of them located, oddly, only in the state of Delaware.

I’m willing to concede that perhaps there is a Delaware, USA location and hackers chose to publish this information specifically.  But if that were the case, why US citizens in Delaware, if your target is Israel?

A screenshot of a portion of that list is provided below for reference, redacted. 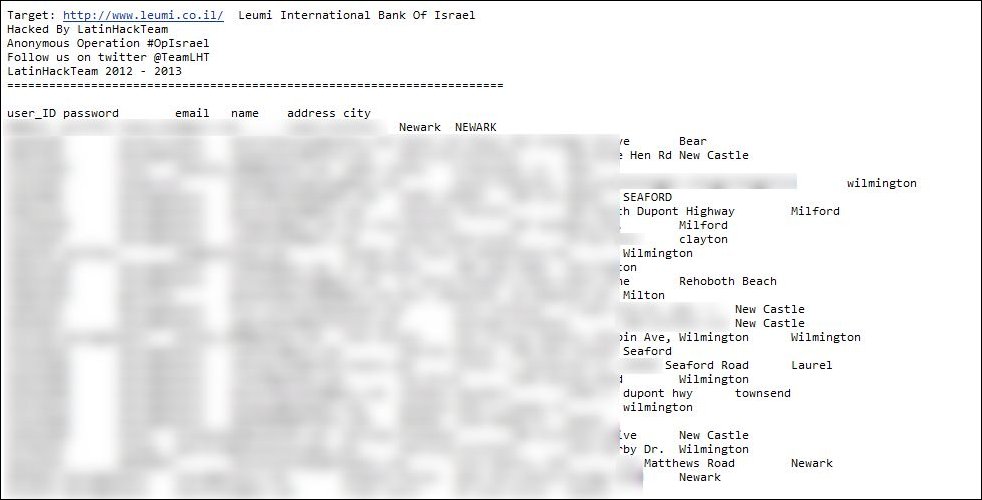 Several versions of another allegedly leaked file, posted at Pastebin (links redacted here to protect the security of those identified), contain what appear to be full credit card numbers, expiration dates, card verification codes, full names, addresses, social security numbers and other identifying information of the account holders.  Many of the records also contain AOL account information.  Other versions appear to be the same or similar information, however, uploaded by different individuals.

Again, these records also appear to be almost entirely that of US citizens and not Israelis (I counted two Israel records in each of the files), which might lead one to ask questions about how this information is associated with an attack on Israeli targets.

Modified screenshots to illustrate excerpts from two of the files, redacted, are below. 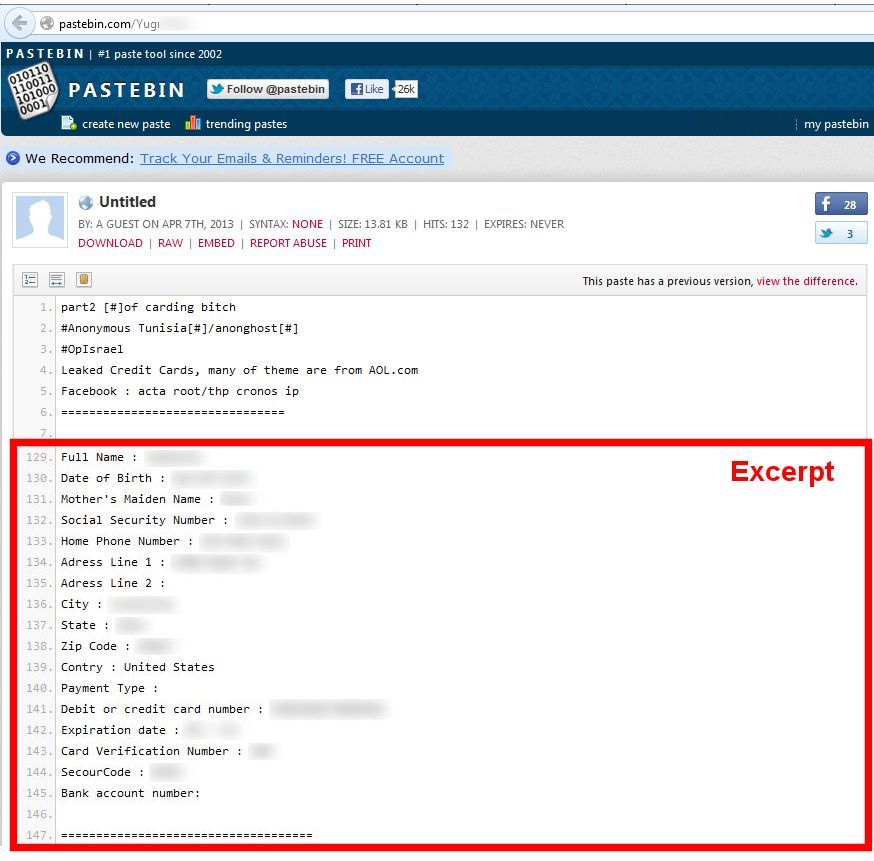 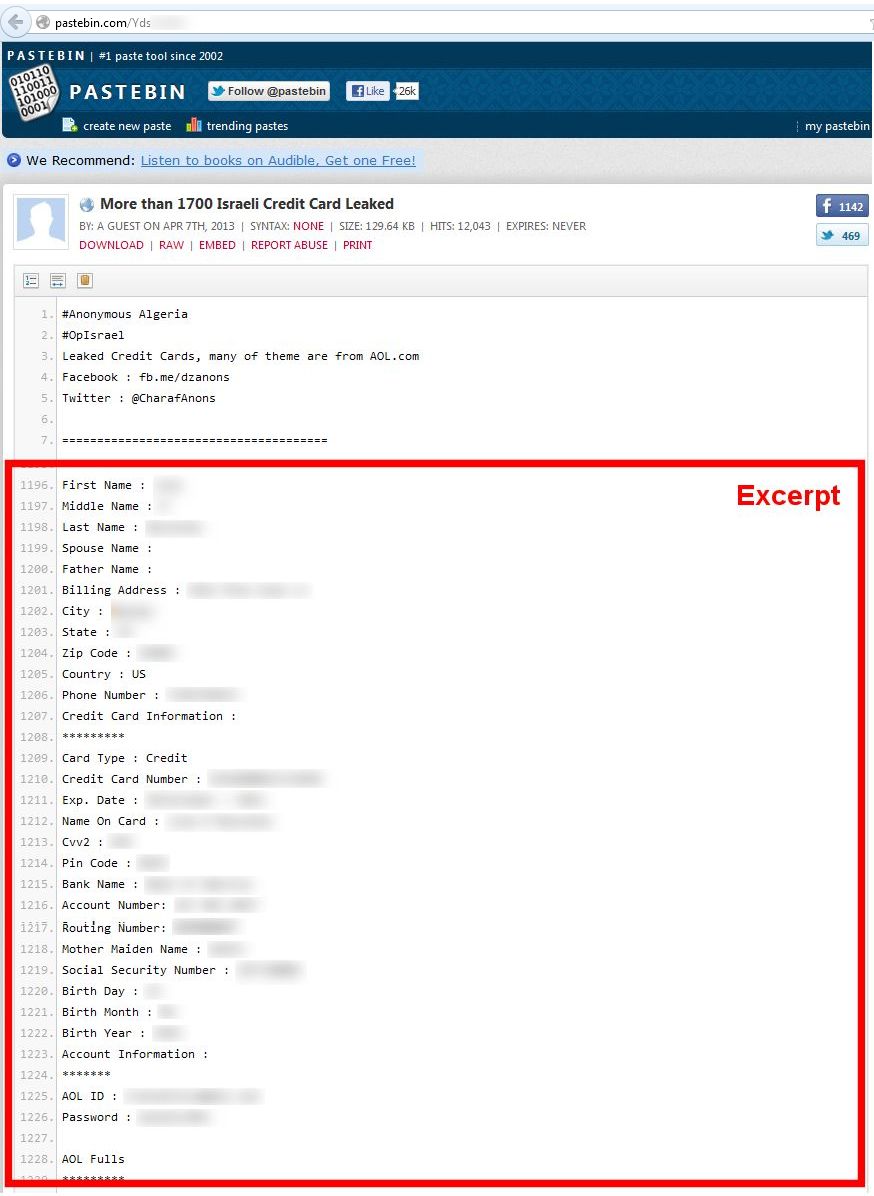 Anonymous has made additional claims that 30,000 Israeli bank accounts have been hacked.  It is not known whether this claim refers to some of the same data as that in the files captured above.

Given however that the information in the above files is apparently that of US citizens and not of Israelis,  it does raise questions as to whether or not the leaks were actually obtained from Israeli databases, though that cannot be definitively confirmed at this time.

Israeli authorities have thus far denied that any major breaches occurred over the weekend.

Regardless of whether or not the claims of hacking Israeli databases are true, what purpose would exposing any innocent civilians to potential harm by posting all of their personal and financial information online possibly serve?  What does that do to advance the Palestinian cause?  What does that say to the public?  That Anonymous is willing to hold Israeli or US citizens digitally hostage to prove a point?  Is this really the PR image that Anonymous as a collective wants for itself?

As always, I make the disclaimer that Anonymous is a leaderless movement, anyone can operate under its banner and one individual or group does not speak for all of Anonymous.  However, this was a highly publicized operation with many participants operating under the Anonymous banner.  As such, like it or not, Anonymous the collective will be forced to own whatever PR fallout comes of this.

As with any mass hacker operation, it is often difficult to sort through the claims and disseminated information to determine fact from fiction.  For that reason, it still remains unclear at this time exactly what the true extent of any damage has been as the result of #OpIsrael.  But closer examination of the supposedly leaked Israel-based data files and the claims to which they are associated certainly seems to be warranted.

We will continue to follow new developments as information becomes available.

A bunch of children playing at being tough can only annoy and lie to sound impressive.

Anonymous? They should call them selves “Ineffective”…

Cowardly terrorists by any name.