One year ago today: “I am very proud of my Native American heritage, thank you”

One year ago today: “I am very proud of my Native American heritage, thank you”

On April 27, 2012, The Boston Herald broke the story online that in the 1990s, soon after she joined Harvard Law School, Harvard touted Elizabeth Warren as a Native American.

Warren told The Herald that day:

“I am very proud of my Native American heritage, thank you”

The Herald ran the story in the print edition the next day. 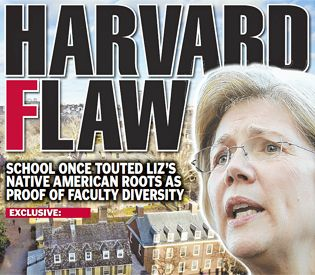 The rest, as they say, is history.

Well, you knew the Globe-Democrat wouldn’t run the story. Somehow I think it appropriate that LI should give out a 1-year anniversary award to Lieawatha celebrating her heritage …

I don’t see the problem here. After it turned out that Warren not only wasn’t even 1/32 Cherokee but in fact had a relative who was a guard on the Trail of Tears, she said that it was “family lore” that they were part Indian and since her mother told her that, attacking this claim was attacking her mother.

My family, too, has equally valid lore. Now, we seem to be Ashkenazim as far back as anyone knows (probably a bit of Cossack in there, too) but it’s been our family lore that we are directly related to the British royal family.

Ah, yes, many is the time we’ve sat around the seder table and regaled each other with how Uncle Hymie used to ride to the hounds with the Prince of Wales, and how Great-aunt Sophie used to meet with Queen Victoria once a week for tea, mah-jongg, and complaining about the kids.

My next trip to London I’m not going to bother with a hotel. I’ll just call Cousin Liz; she always has a spare room. “C’mon over, Alex,” she’ll say, “and bring the mishpocha.”

I feel ill when I look at this woman. I sometimes hope she runs for president so she’ll have to answer for her past and address issues such as those Professor Jacobson has documented. However, as Dennis Miller has said, the last election seemed to indicate that we’re no longer a nation where issues, performance and a questionable past matter when running for the presidency. Imagine having to wake up everyday to President Warren. Shudder.

Please Professor Jacobson, don’t ever let up on this woman. She epitomizes what is absolutely wrong with our politics today.

Consider this a thumbs up to the 10th power. Professor Jacobson did a great job exposing this woman for the fraud that she is and, as a result, the party that nominated her.

No, no, no. You see Liz’ard misspoke, when she said Cherokee, she meant Chechen.

I mean chech out these high cheek bones.

Note that she always awkwardly uses the word “heritage” in lieu of “ancestry” or “blood”. “Heritage” is a sort of vague thing, that might refer to property or some kind of cultural tradition. She would claim, if pressed in a court of law, that her “heritage” is her own personal life and beliefs. Scam artist.

Sorry, Professor, I have some bad news…

Warren is not Obama is not … There is diversity. Since the “diversity” advocated by the Left denies or marginalizes individual dignity it can only be considered corrupt. The people who suggest and promote policies based on this selective doctrine have ulterior motives, which are typically to advance their political, economic, and social standing.

My Oklahoma grandparent’s marriage represented both those who came early, looking for Indian land – the Sooners – and the of the Indian Nations, so my paternal racial identity is both European and Indian. Even with incontrovertible proof beyond my high cheekbones, I’d never, ever offer myself as a member of any of the 5 tribes and nations of which I am part, because to do so would be false and pretentious. I’ve never lived, much less suffered, as my Indian fore-bearers did. It would be like stealing from myself and from generations of people whose sacrifices gave me the very life I lead today.

But then again, I’d not an ambitious, narcissistic, lying, cheap, progressive politician (aka: Democrat).

I don’t see Lizzy going back home to Oklahoma as a conquering hero anytime soon. Too many people still know and remember who she really is and are not impressed by who she pretends to be. Naturally, she’s a Democrat, the Party of Andrew Jackson, the man who tried to exterminate the Cherokee.

Lest we call Lizzy an outright fraud, here are pics:

Attributes like honesty and self-reliance are but trivial distractions in the greater quest to install marxist socialism in the USA. Teddy was a serial adulterer and notorious drunk even after killing Mary Jo Kopechne, and never had a serious challenge.

Massachusetts’ priorities may be anti-American, but they are at least consistent about it. The indiscriminate warrantless searches and draconian curfew imposed in the hunt for the Marathon bombers (a/k/a “Speedbump & Gilligan”) is a harbinger of things to come in our Brave New World when the Obama/Warren vision comes to fruition.

On the bright side, now that “family lore” has replaced verifiable history as biographical fact, I can finally reveal that I am, in truth, the rightful King of France.

[…] Jacobson at Legal Insurrection has up a terrific post today on “One year ago today: “I am very proud of my Native American heritage, thank you.” […]

Native Americans STILL can’t meet with Warren, even ones that helped on her campaign!

“Now, even more disturbing anecdotes have emerged regarding the antagonism Warren and her staff continues to display toward Natives. According to Lisa Begay, an Arizona activist and member of the grassroots organization Reservation Rats, “Last week, six Narragansetts who helped her during the election went back and forth between Rhode Island, Massachusetts, and DC trying to meet the Senator. She did not even give them the time of day. Her staff didn’t bother to reply to their emails either.”