Turkish gov’t again proves how far it has slipped

Turkish gov’t again proves how far it has slipped

We don’t know what or why Israel carried out a secretive bombing mission in Syria earlier this week.

Speculation runs from hitting advanced anti-aircraft missiles on their way to Hezbollah, to a biological or chemicals weapons institute, to other unnamed but sufficiently important targets.

One thing we do know is that Turkey is confirming, in reaction, its slide from supposed model of responsible political Islamism into international religious agitator.

Turkish FM slams Assad for not responding to Israeli strike

Turkey’s foreign minister blasted embattled Syrian President Bashar Assad on Saturday for not responding to an alleged Israeli strike on targets in Syria.

On his way to Munich, where he will meet with world leaders to discuss developments in Syria, Ahmet Davutoglu asked reporters, ”Why didn’t Assad even throw a pebble when Israeli jets were flying over his palace and playing with the dignity of his country?”

Davutoglu suggested that the Syrian leader is conspiring with Israel: “Is there a secret agreement between Assad and Israel? The Assad regime only abuses. Why don’t you use the same power that you use against defenseless women against Israel, which you have seen as an enemy since its foundation,” he said, according to The Hurriyet news agency.

The foreign minister said that Turkey will not stand by as Israel attacks a Muslim country.

“Syria must do what a country under attack has to do,” Today’s Zaman quoted Davutoglu as saying, seemingly goading the Assad regime to retaliate. 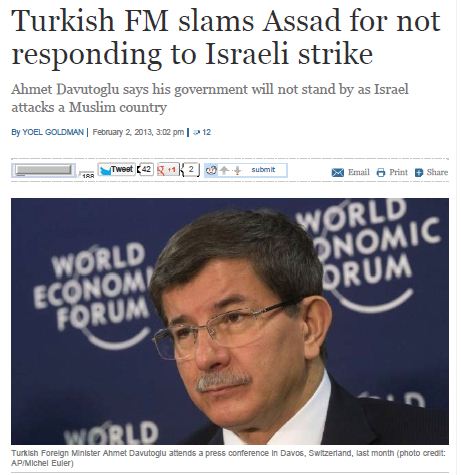 This would be the same Foreign Minister who recently saluted “all those martyrs who were killed for the holy territories”.

I’m more convinced all the time that the highest echelons of Turkish government are infected with a dream of becoming the leaders of a new caliphate.

They can drink from a well of past glory, as they might imagine, from the Ottoman Empire.

95-99% of all foreign terrorist organizations on the official US State Department list are Islamist*.

[*Disclaimer: Islamist is the standard use short form of Islamic racist, misogynist, jihadist, propagandist, rapist, totalitarianist – all of which are expressly mandated and approved in the Koran and other core texts of Islam.]

Looks like the only thing that has slipped is the thin veil of pretense revealing the true face of Turkey – and – Islam.

The preponderance of evidence shows that Islam, from its core texts to its actions, its political documents and its declarations in ancient and current history, is an ethical and moral nuisance, a constant violator of human rights and international treaties and a malevolent and malignant racial hate movement.

This also proves that obastard has long since relinquished America’s power in the region.

The flip side of that is, that although Israel now knows she’s been abandoned by America, she also knows she is now “Israel Unchained.”

“Why don’t you use the same power that you use against defenseless women against Israel …?”

Invoking the proverb, “The enemy of my enemy is my friend,” yields an uncomfortable truth for Davutoglu:

Israel is a friend to thousands, if not millions, of muslim women.

Sorry, Davu. You unwittingly said it yourself.

Things that make you go Hmmmmmm… From less than a month ago: NATO begins deploying Patriot missiles in Turkey

Of course, Obama just sent Egypt a bunch of tanks and F-16s, so why not arm yet another Islamist nation?

Me and Chuck are wondering just how bad this thing would be if it weren’t for the Jewish Lobby owning our government.

Anchovy, no Jewish lobby is rich enough to outbid the Saud family.

All our involvement in the middle east has been saving one group of Moslems from another. That does not benefit anyone but the House of Saud.

Turn on your sarcasm detector.

You gotta remember that them Juice got all kinds of tricks in the bag. They made Muslim men’s penises disappear; they got spy birds; they got all kindsa stuff. Anything strange that happens in Muslim countries, them Juice did it. The money of the House of Saud is nothing for them Juice. They gonna use spy mice, spy birds, spy monkeys, spy apes, and spy pigs to separate the House of Saud from its money. America, Australia, China, everybody got shale oil. Next thing you know, House of Saud aint got no money to pay an honest homicide bomber or an honest 72-virgins seeking terrorist. And it will be because them Juice made shale oil appear in all them countries just to hurt Muslims. You just watch and see. Anything they can’t explain is them Juice fault.