The long inexorable descent of the Southern Poverty Law Center continues with the revelation that the shooter at the Family Research Council used the SPLC Hate Group list to target the FRC.

I have commented on the absurdity the SPLC has become many times before:

This development deserves my full, undivided attention.  Unfortunately, that cannot be done today, or tomorrow.  Or who knows when.

So check out these numerous excellent links and more at Memeorandum: 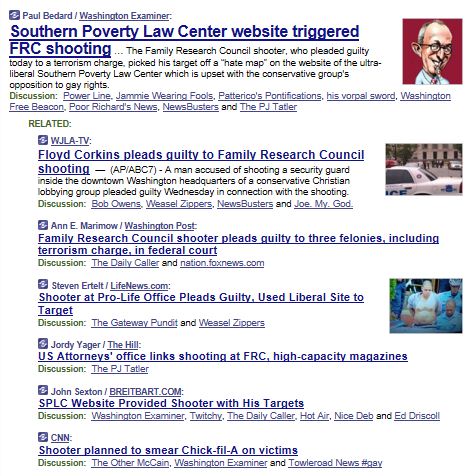 How long before innocent gun owners (or mere applicants) are targeted by the loony left as a result of the Journal “News” publication of NY gun permit holders? Even though the Urinal News pulled the map down, once it was uploaded, it can easily be found.

The bulk of the crazies are found on the left, so we should be seeing more “unexpected” actions like this.

The only poverty at the SPLC is in their collective (deliberate pun) intelligence.

A New York-based website sent requests to every county sheriff’s office in Kentucky asking for the list of handgun permit holders in that county. As far as I know, every single one answered with, “You are not allowed to have that; that list is exempt from our freedom of information act.”

The letter claimed the purpose was to “inform people who in their area has a handgun permit”.

The corker to this story came from the DA who prosecuted this case.

He used a press conference to lobby for limits on magazine size.

I kid you not…

Those evil gun magazines are ruining it for everyone! Why only last week a 30 rounder cut in front of me at the supermarket checkout line. Somebody needs to do something about them.

The SPLC is a business. Their business model is to reap profit from exploiting differentials and gradients, real and manufactured, in the population they serve. They are not a rights organization, civil or human. They are a competing interest in the political, economic, and social markets.

Then there’s Chris dorner, via PJ media, instapundit, who is a rabid leftard former/fired cop who is suspected of hunting and murdering L.A. cops and their families.

Isn’t it time we started treating these self righteous scumbags like the scumbags they are?

He is just following the Pres. Skeeter example.

He has his own death list, and he’s working it.

Laws…??? THIS is why we need those steeenkin’ laws…

The media will play this story one of two ways: not at all, or sympathize with Dorner and claim that “they” made him unstable and if “they” had been fairer none of this would have happened. “They” are the cause,not Dorner. Poor Dorner, he was a victim of “them”. The left takes responsibility for nothing.

According to the SPLC hate map, the SPLC is peculiarly selective in what is not permissible to hate.

Both the Nation of Islam black supremacists and the Aryan white supremacists are listed as hate groups, as well as groups that oppose Islam and gay behavior, but evidently a group or religion can hate and kill Jews and Christians (as Islam does) with their blessing.

If I may play the devil’s advocate without getting shredded for it, lol…..

Were this shooting being held up as a reason for more gun control, I’d be pointing out that the gun didn’t get to the scene by itself, nor did a hate group list jump magically into the shooter’s hand, that the only bad guy here is the shooter, the guy who brought the gun to a target from the list.

Were this shooting being held up as a reason to restrict freedom of speech by banning the publication of hate group lists, I’d be pointing out the Bill of Rights, of course, and law of unintended consequences, adding that although I deplore the SPLC’s particular list of hate groups, a great many different agencies and organizations publish lists of hate groups, and if some nut somewhere grabs a copy of one and goes and kills people on it, our response is to restrict free speech? “Though I disagree with what you say, I will defend to the death your right to say it” or however it goes, that’s my take on the SPLC’s choices for their hate group list.

I am fond of pointing out the hypocrisies of those on the left, and I’m particularly wearing my finger out on all the examples of double standards in politics and ethics, the most recent being our new WH assassination team, beloved by the same folks who bewailed the horrors of enhanced interrogation. But I want to be as sure as I can to check myself for the same sort of inconsistencies or outright hypocrisy. We do this for each other when we take the risk of posting.

To shoot up the lobby of the Family Research Council for political reasons seems a little nuts, more like the shooter had ‘crazy’ on board before he took on the ‘hate list killer’ part. I can easily see a nut taking up any list of hate groups and picking a victim – or picking a name and apt number off an apartment house mailbox, or choosing a victim from that day’s newspaper headlines. Is it necessarily the SPLC’s fault?

Again, this devil’s advocacy by someone new to the event, but unless it can be shown that the SPLC in some way wanted this list to lead to violence, I’m not feeling the outrage.

Make no mistake. What the left wants is a civil war.

I haven’t really heard or seen anybody suggesting that the government should restrict SPLC’s freedom of speech on this site, or anywhere I visit with any regularity. What I see is the SPLC being nothing more than a Leftist hack group promoting a false narrative of rampaging hate groups that are an eminent danger to every racial/gender/sexual orientation group recognized by American culture.

You hear the Left (incl. the SPLC) talk about “a climate of hate” an awful lot. Many people believe it to their core. But the actions of the Left are more in line with creating a climate of hate– stoking racial divisions, class warfare speech, centralizing and doling out punishment and rewards according to their own political values. Oddly (sarc.), none of their talk nor actions seems to help this “climate of hate” thet their political position is basicly built upon and theye responded by ramping up the heated rhetoric and pointing fingers at targets.

And when they ramp their rhetoric up enough so that a Corkins or a Dorner or a Thandiwe break, should they not be held responsible?

Note that holding them responsible does not equate to passing laws restricting their freedom of speech. But maybe we should look and see if federal money is being given to the SPLC and, if there is, hold them up to public scrutiny. Maybe we need to see put forth a concerted effort to show what the SPLC has done (manufacture hate groups at times) and haven’t done recently and if it should are deserving of donations.

I don’t think either of these possibilities are hypocritical nor do they come from a double standard.

It’s not the easiest question, but when you stoke and do your utmost to create and exacerbate a climate of hate, how responsible should you be when violence erupts from your efforts?

Exactly what “long inexorable descent” are you talking about? I see no such thing in SPLC’s history. After its founding, it’s been a flat line.

Deese won a mostly noncollectable judgment against some KKK groups, but then formed his business plan of scaring money out of rich white liberals, mostly on the coasts, with the idea the Klan was making a comeback, which was always a lie.

Later he expanded the list of Boogey Men because even gullible liberals began to realize the Klan was essentially out of business. But he’s never done more than publish lists of “hate groups” and send out scary “news releases” and hold “press conferences” to keep his name in the news, followed immediately by a wave of fundraising appeals.

It’s a great way to assuage liberal guilt without actually having to touch any Negroes or anything icky like that.

And SPLC is basically Deese himself. He calls the shots and makes all the money. Most of the rest of his staff are low-wage clerical workers handling mailings and depositing checks that come in, plus a couple presentable lawyerly types to appear with him on camera to give the illusion of a “legal team fighting extremism.” The list of actual legal actions filed over their entire history probably wouldn’t fill two pages – double spaced.

It’s a scam. That’s all it has ever been. And, while Deese is annoying, he isn’t “giving back” any of the money, so it is probably just as well those liberal suckers who donate to him did so, lest their conscience money be spent more effectively on other leftist causes.

Hey, you might have tomorrow off. Hope you bought gobs of bread and milk.