Obama at Chicago school: “these guys are no different than me”

Obama at Chicago school: “these guys are no different than me”

President Obama spoke to students at Hyde Park Academy in Chicago this afternoon, using the occasion to address a basket of issues, including gun control, raising the minimum wage, education spending, and the overall state of our communities.

During the 26-minute speech, Obama said that he wished he had a father around when he was growing up, and that students he met with earlier in the day were “no different than me [sic]”:

What I explained to them was, I had issues too when I was their age. I just had an environment that was a little more forgiving. So when I screwed up, the consequences weren’t as high as when kids on the south side screw up. So I had more of a safety net. But these guys are no different than me.

Then Obama spoke about Martin Luther King, Jr and Hadiya Pendleton, whose parents were in the audience today:

When Hadiya Pendleton and her classmates visited Washington three weeks ago, they spent time visiting the monuments, including the Dr. Martin Luther King, Jr. memorial just off the national mall. And that memorial stands as a tribute to everything Dr. King achieved in his lifetime. But it also reminds us of how hard that work was. And how many disappointments he experienced. He was here in Chicago fighting poverty, and just like a lot of us, there were times where he felt like he was losing hope. So in some ways that memorial is a testament not to work that’s completed but it’s a testament to the work that remains unfinished  His goal was to free us not only from the shackles of discrimination but from the shadow of poverty that haunts too many of our communities. The self-destructive impulses and the mindless violence that claims so many lives, of so many innocent young people. These are difficult challenges and no solution we offer will be perfect. But perfection has never been our goal, our goal has been to try and make whatever difference we can….

Obama’s speech began almost simultaneously with the release of information about the federal charges facing former Congressman Jesse Jackson, Jr., and his wife Sandi, leading one reporter to note the suspicious timing: 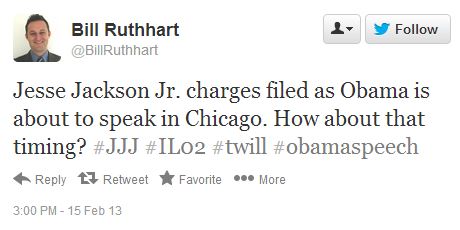 Next stop for Obama: Florida vacation.

I am sure the timing of the speech was just a coincidence. 😛

I thought Obama’s father, or at least the ‘father figure’ in his life, was Frank Marshall. Guess Frank didn’t do a good job.

“The Truly Most Catastrophic Thing To Ever Happen To The United States of America,” speaks again.

Newt talked about successful inner city schools and how they CAN change things…real change.

Much better education can be had for lots less money. Our nation’s schools are a disgrace because of leftist ideology, poor core curriculum and unions.

The murders are up to Al Capone levels but why is there no Tv series?

They are always complaining there are not enough roles for them bros.

At least a musical.

Of course they are just like him. Only problem is the country needs someone other than a narcissistic 5th grader at the helm.

There was quite a bit of build up around here on this speech. From what I can tell via various Twitter feeds is that he was quite a bit delayed in starting. Supposedly he was at some roundtable with whoever. What is interesting though, is that the timing, whether intentional or not didn’t seem to make a difference. Most of the lead stories are about JJJ and his cashmere cape addiction.

I wonder how many of those students who are just like Obama have fathers who are alcoholic polygamists?

Having lived in poverty in ’30’s and ’40’s I found that hard work got me out of poverty much faster than fighting it. A hard truth Liberals can’t understand.