Look at how dreamy Morning Joe treats Elizabeth Warren’s “grilling” of bank regulators (it hardly was a grilling, just a single inane gotcha question she repeated over and over for dramatic effect):

Now contrast that with how Morning Joe treats Ted Cruz’s grilling of Chuck Hagel, via Mike Allen of Politico (which is pushing really hard the Ted Cruz is extremist meme):

Politico even is in love with the fact that Warren will not make herself available to reporters, a continuation of her campaign tactics.

Your media bias in action, and in video.

Warren’s image is being groomed (for higher office?), while the Stop Extremist Ted Cruz meme develops.

Can you imagine what the reaction will be if Cruz ever takes a drink of water?

Update:  I told you so, it’s why we have preserved the months of research at ElizabethWarrenWiki.org and will continue to add to it: 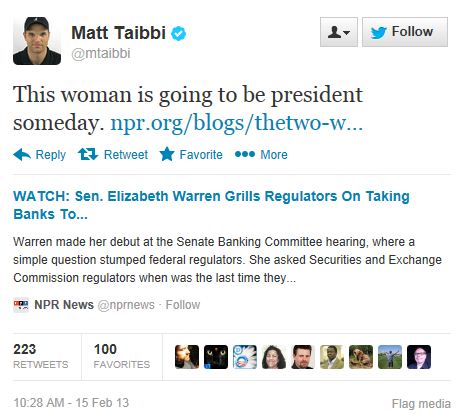 Imagine if Ted Cruz had also taken a drink of water……

We always get to see who really terrifies the Left: Sarah Palin, Ted Cruz & Allen West – the Tea Party.

What is it with the Progressives so bent out of shape over latinos drinking water? Are they afraid of Montezuma’s Revenge?

1. “taking to trial” CAN mean you forced to settlement WITHOUT trial. (Most litigation never gets to trial…especially when brought by the Federal govt.)

2. but wasn’t Warren indicting the Obamic DoJ and regulators? Why, yes, she WAS.

If companies insisted on going to trial on everything the entire regulatory structure would collapse. Same with criminal defendants and the criminal justice system. Plus, what would it mean for regulators when companies started winning their cases? Inane was a very kind description of her questioning.

A VERY on-point and timely discussion. Limited government means limited legal jeopardy for citizens. As things now stand, we all walk through a minefield every day, just going about our harmless business.

@Rags: I was thinking about this the other day. I’m old enough to remember the S&L crisis of the late 80s early ’90s. Keating was the media figurehead for it because they could link him to John McCain and four other senators (the Keating Five, the media dubbed them), but hundreds of S&L execs went to jail when Reagan and Bush41 were in office.

Then after Clinton’s tech bubble burst in the first months of Bush43’s term, think about all the hucksters who went to jail: Tyco exec Kozlowski, Worlcomm exec Ebbers, the guys who ran Adelphia and Enron, and others. All high profile prosecutions that occured while Bush41 was in office.

I’m not sure if fraud at Wall Street firms can be proven as part of the subprime mortgage crisis, but it’s certainly a widely held belief that fraud did occur. Yet no senior Wall Street execs have been “perp walked” in orange jumpsuits under Obama.

Yes, Jon Corzine “disappears” over a billion dollars of his clients’ money, and not only does he not go to trial, he never even gets charged with any crime. And I’m sure the fact that he is a Democrat and an Obama supporter had nothing to do with Lizzie Warren’s lack of outrage over his obvious corruption.

Yep. Me, too, on the old enough part. I ALSO remember that a major cause of the S&L crisis was the market distorting “capital investment” tax provision that was suddenly killed, leaving a huge mass of investments people had made under a totally rational set of assumptions worth much less than they expected.

This will happen every time government distorts markets, either in big or small crises, as markets reassert themselves. It is a matter of pure cause >>>> effect.

And what offenses did these big banks commit for which they should be tried, in Warren’s opinion? Giving mortgage loans to unqualified minority borrowers? Giving millions of taxpayer-backed mortgages to illegal aliens? These were certainly very stupid actions that ended up costing taxpayers billions of dollars in losses, but they were actions that were promoted and encouraged by the banking industry’s favorite (and wholly-owned) politician, Barry Obama.

While the lending was “stupid”, it was also made mandatory by the actions of BIG GOVERNMENT. I remember Janet “Big Foot” Reno explicitly threatening (illegally, IMNHO) banks and other lenders with regulatory hell if they were not compliant with demands for relaxed loan criteria.

All the resulting “stupid” was the direct effect. Both predicable and predicted. And, remember, the inflation of the housing bubble was called for by none other than Kwazy Paul Krugman (Enron adviser)!

Why hasn’t Ted Cruz been forthcoming with his family lore? What’s he hiding?

1. Politico even is in love with the fact that Warren will not make herself available to reporters, a continuation of her campaign tactics.

The way Warren set up the agency she expected to head indicates that her style is to avoid accountability.

She is an even emptier suit than Obama. Her campaign was funded by so far unidentified major backers, e.g. big California money, with an eye toward the Presidency. It’s prudent of her to avoid the press.

2. Did Warren think of her question or was it supplied to her by her handlers?

3. A conjecture regarding why Wall Street has not been prosecuted: the Wall Streeters have evidentiary records of bigshot Democrats telling them to do what they did.

My wife is a liberal who hates Sarah Palin. I plan to tell her that Elizabeth Warren is the left’s version of Palin. I also plan to read to her excerpts of Philip Shuchman’s review of Warren’s 1989 book.

Hugh… buy a sofa with back support, suitable for good sleep.