A series of Occupy twitter accounts as well as the Occupy Sandy facebook account were hacked Tuesday evening, with the hackers tweeting out messages like “OCCUPY IS OVER. IT WAS FUN. #SORRY” and “OCCUPY IS OVER.” The affected twitter accounts included @OccupyWallSTNYC, @OccupyTogether, @OccupyChicago, @USUncut, @OccupyArrests, @OWSUnionSquare, and others.

Followers responded with confusion, anger (and more than a few retweets). Here’s some examples of what the hackers tweeted: 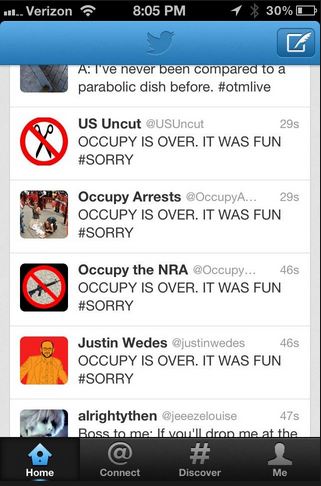 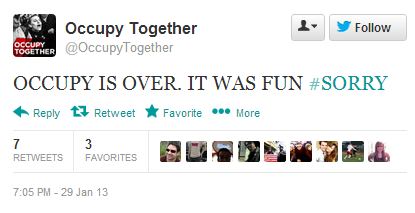 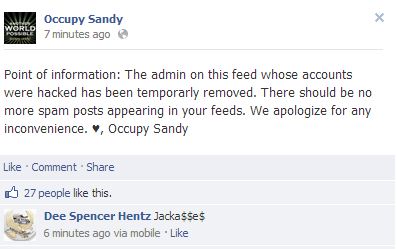 Occupy Wall Street tweeted out about an hour after it first occurred that they had “retained control of the count,” saying they believed the breach had occurred after both Occupy NYC and Occupier Justin Wedes‘s accounts were accessed. 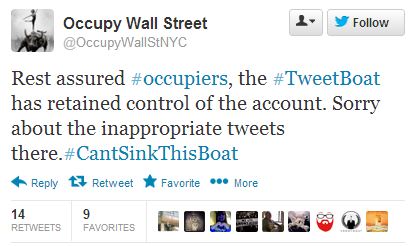 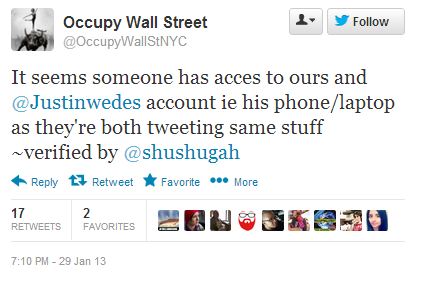 DANG! That’s just to bad! ROFL I think George Bush did it!

This is like a committee of enquiry. Set up by a government body to ‘ investigate’. Something .

They never go away.

But don’t ask whodunnit. It was… Anonymous.

[…] Legal Insurrection tracked the source of the hack to an administrator whose account was compromised. […]

Question? Why did Barry, Hillary & Steve engage in a 3 way on national TV Sunday eve.? What’s this about softballs?

That’s encouraging, isn’t it? A little ray of hope, perhaps.

When you stand for nothing more than occupying a bit then you are easily bumped from the memory cache.