We are pleased to announce the launch of Elizabeth Warren Wiki (ElizabethWarrenWiki.org), the most comprehensive source of information and documentation with regard to Massachusetts Senator Elizabeth A. Warren.

The site originally was conceived, days before the 2012 election, as The Elizabeth Warren File, a place where we could collect the massive amount of research compiled by people such as Cherokee Genealogist Twila Barnes and her team, Michael Patrick Leahy of Breitbart.com, The Boston Herald, and others including Legal Insurrection.

Given the likelihood that Warren would continue to be a national political figure regardless of the election outcome, we didn’t want this information to get lost from the public view.  It was particularly important to have it all in one place given the mainstream media and left-blogosphere willingness to overlook or excuse the negatives in Warren’s history.

Over time, however, we began to question whether a regular website format was the best vehicle.  We began to consider and do initial preparation for a Wiki-style format.

Our format decision was made for us when we noticed that Warren’s Wikipedia page had been ethnically cleansed of the embarrassing information regarding her claim to be Cherokee.  The Wikipedia page remains inaccurate and incomplete, the result of an edit war supporters of Warren appear to have won, at least for the moment.

We decided that our Wiki would be a much more comprehensive and balanced alternative to Wikipedia.  We will present the good about Warren and her career, along with the negatives.  We collect the information, you decide.  Here is the Table of Contents at launch: 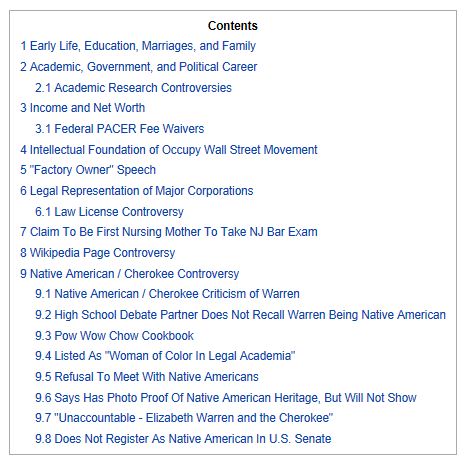 Consider Elizabeth Warren Wiki a work in progress.  That is the point of a Wiki.

We will continue to add sections providing greater details and documentation as to Senator Warren’s campaign for Senate, campaign and Senate staff members, professional background, and government service.

Elizabeth Warren Wiki took a lot of effort and was a group project.  Special thanks to Aleister from American Glob (who also helps at College Insurrection) without whose help the Wiki still would be pending rather than published.

Ed Burns also custom designed a WordPress template so that we did not have to master the MediaWiki software and could use the more familiar WordPress content management.  Ed has designed many custom features for Legal Insurrection.

On to the next project, as soon as we figure out what it will be.

Update: “Warren’s probably not afraid of a little wiki.”

Bravo to you and the team, Prof.!

Great job! Sometimes I think that I don’t have a dog in this particular fight. What should I care about a poser not living in nor representing the state that I reside? Fundamentally, she works for every United States citizen. Fundamentally, she is a liar and needs to be held accountable for her lies and deception. She pulled a “Lance Armstrong”. When elites are not held accountable there will be chaos. I plan on using the “David Gregory” defense someday while coyote hunting with my 30-clip. Thanks professor for keeping this in some sort of spotlight.

“She pulled a “Lance Armstrong”.

Wow! Warren’s trajectory from flake to faker to flaunter and back to flake is documented! Excellent!

I predict this site’s revelations will take a bite out of the Pow Wow Chow cookbook sales and, more importantly, out of Warren’s prospects for higher office. Warren long ago reached the level of her incompetence (but sadly that would make her an overwhelming propect for an Obama cabinet position).

There will be a cocktail reception this evening to celebrate the new website launch; hor d’oevres will include Liewatha’s family recipe for land crab puffs and other delightful Pow Wow Chow!

So has someone posted a link to this new site on Wikipedia yet? “For the real story, go HERE.” LOL!

I was going to ask if someone regularly tries to insert a reference to the new Wiki in the regular one.

they’d have to monitor daily because I’m sure that it would get labeled as a partisan website.

They really have no shame, do they?

Professor J. kinda’ sorta’ believe that you ARE the next Breitbart.

Our nation needs, no, must have, another leader equal to the spirit, intellectual ability and intestinal fortitude of the Andrew Breitbart.

Just wanted to add that I was the person who found Warren’s quote about being the “first nursing mother in the history of New Jersey to take the Bar exam” quote back in May, and tipped off Boston Herald reporter Chris Cassidy, who ran with it.

What will be even more ironic is that the Regressives will call this website a “fake,” which for Sen Warren will be highly appropriate.

so a one sentence blurb should cover that 🙂

We should all bookmark the page, visit it regularly, and pass it along, perhaps even linking it in comments on blogs and websites wherever it is relevant. Traffic is key!!

Warren, a faker, and a commie all but in name.

Professor, apologies that this is on the wrong thread, there was no open thread.

But I wanted to post this video of a (legal)immigrant who testifies on the importance of the second amendement. I found it at Market Ticker. Thought it was sharing for your readers.

Saw this last night. I’m glad he was ignoring their bell to end his time. Great, brief and to the point!

Nice work. We need to game the Google algorithm so that when anyone Google’s “Elizabeth Warren”, this site appears near the top of the search results.

Kinda like how the execrable Dan Savage gamed Google so that when anyone searches Rick Santorum’s name one of the top links is to a fake site that redefines his name in gross and embarrassing terms.

Professor: May I make a suggestion for an addition to your “Family” section?

Warren in all of her speeches claims that her father was a janitor, but on his death certificate, Warren lists him as a “flight instructor.”
http://www.pollysgranddaughter.com/2012/09/janitor-flight-instructor-or-businessman.html

like I said, it’s a work in progress, and that already is on the radar. I welcome reader suggestions.

Congrats. We will feature the launch tomorrow on the Canto Talk Blogtalkradio.com program I do tomorrow.

“I love the smell of napalm in the morning.”

Should include a link to http://elizabethwarrenwiki.org/ every time she is mentioned at boston.com or other relevant news sites. I will do my part, but can’t be sure i’ll see each mention of her. The question is how long it will take until the globe starts blocking me.

I emailed the link to a couple of Boston Herald reporters this morning.

File this one under the Pow Wow Chow section (for entertainment purposes).

Love it! Finally, a conservative who’s showing some digital savvy!

We call this ‘Link Sculpting/SEO’ in my industry. That means crafting search engine results by capturing high traffic words in sites like a Wiki.

Marketing trends show that consumers are increasingly consulting search engines for corroborating information (negative or positive) prior to making a purchasing decision.

Yup. 80-90% of my business comes from all over the US, making marketing way too expensive by traditional methods of TV, radio, etc. So I began asking each out-of-state client how they found my business, which is a highly specialist thing, a very tiny niche. They search engined it. What keywords did you use? Two or three keywords emerged as the far most common, so I redid my website and incorporated those keywords into my URL. Now, I’m the #1 return, top of page one, on searches at Google, etc.

[…] is what I was teasing about last night. I promised William Jacobson I wouldn’t tell anyone about it before the launch. I’m proud to say I played a role in […]