I previously posted about The first battle of the next Tea Party wave — December 5 rally in Nashville against Obamacare exchange.

The protest, while not huge, was well attended.

Governor Bill Haslam was on the fence.  No more.

Via Linda in Tennessee, Haslam says Tennessee will not set up health care exchange:

Gov. Bill Haslam announced Monday that Tennessee will not set up its own health insurance exchange under the Affordable Care Act.

Haslam said in a speech to Nashville’s Downtown Rotary Club that he’s decided not to set up an exchange because he’s received insufficient information about how it would operate from the federal government. In just the last month, officials in Washington have released more than 800 pages worth of draft regulations, Haslam said, leaving him unclear whether Tennessee would be better off operating its own exchange or leaving the task to the federal government.

“I’m more and more convinced that they are making this up as they go,” Haslam said. “We weren’t told enough to be able to run this on our own.”

The decision comes days after tea party groups rallied near the state Capitol to oppose a health insurance exchange. Speakers, including a few Republican lawmakers, said Tennessee should block the exchange to send a message that the state continues to oppose the Affordable Care Act.

Or just one small victory in one small battle in the 8-year war? 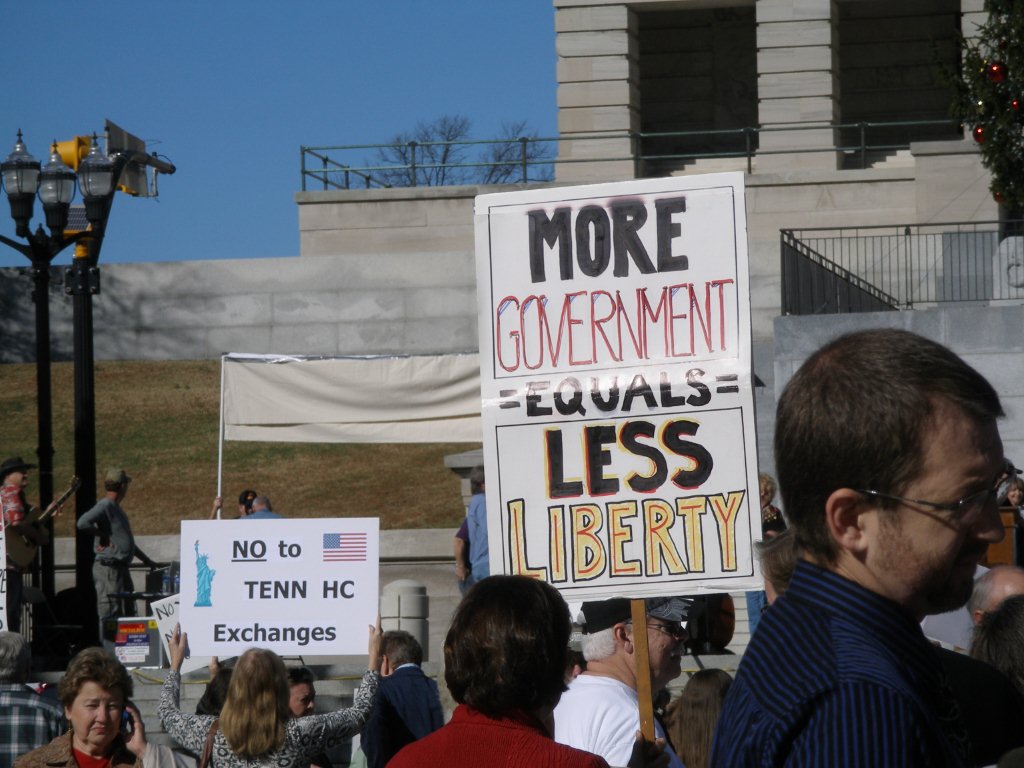 Why would any state which had protecting its own taxpayers as an objection ever elect to set up an exchange? Not only does it encumber that state with the cost of forming the exchange, a cost which repeats year after year in maintaining that exchange, but the state forgoes the opportunity of keeping the Obamacare penalties from that state’s employers under the Adler-Cannon argument based on the express language of Obamacare.

That argument is clearly a winner.
http://www.cato.org/publications/commentary/illegal-irs-rule-expand-tax-credits-under-ppaca-response-timothy-jost

Well that’s the problem right there, isn’t it? Since when do states care about their taxpayers? Was…say…California concerned about taxpayers when the government authorized spending billions on a high-speed rail to nowhere? I don’t think so.

What governments care about is not the people who pay for it all, but rather handing out “free stuff” to those groups who re-elect them.

I’m not so sure that Adler-Cannon protects businesses. All it takes is one employee getting an exchange subsidy, and the entire company gets hammered for every employee. What if an employee of a company in a non-exchange state moved across the border into an exchange state in order to get the insurance subsidy. Now the company is hit with the Obamacare penalties, even though the company is located in a non-exchange state. A company would have to threaten their employees with instant termination for establishing residency in an exchange state, and/or for obtaining a subsidy from another state. Can a company even do this legally? If not, then Adler-Cannon provides no protection.

Gee, Gov. Haslame. I apologize for stickin’ that E on the end of your name, several days ago..However, I can put the E back should you cave along the way.

You are going to need the money to fight c.a.i.r and the lefties, as they continue to build masks, or whatever the hell they are referred to as.

Forget the snowbama care crap, ‘ceptin’ you may not want to visit Memphis for a tad.

Haslam was all ready to cave to the Tennessee health care oligarchy, but realized that the legislature would go out of their way to not fund an exchange

The disaster that is Tenncare appears to have a silver lining.

No no no, you don’t understand. You have to first set up the exchange to find out what’s in it.

This is Tennessee. Had this been New York or Connecticut or Maryland, I would say it was a major victory.

Yes, this is Tennessee. As long as TN and the couple other states who are rejecting obastardcare hang tight, others will follow.

TN is my new adopted state. The hub and I are “volunteers” as of a year ago now. We moved here from CA, where I’d lived my entire life. The difference in the populace’s attitude toward government is stunning. Most of the laws, regulations and policies foisted on the people of CA would last about 5 minutes here before the rebellion in the streets started if attempted here. Here, employees of the state and local governments know who they work for and who pays their (modest) salaries.

Yes, I believe TN will hang tough and will be part of the example needed for other states, including some blue states, to follow when and if they ever figure out how badly they’re getting hosed by obastardcare.

The TEA Party is alive and well, at least in the South. Here in Georgia, Governor Deal said we’re not going to cooperate either. (YAY!!) I’m getting so old I know a lot of doctors now. So I’m going around talking to Doctors about not quitting and why they shouldn’t and what we can do “under the radar”. I told ’em for one thing, just don’t cooperate! They’re starting to listen. We’ve got one doc close by who is only accepting cash (he set his office visit price at $25 and goes from there for lab work, etc.). He’s saving money too ’cause he didn’t have to hire 5 people to file insurance, then wait and hope they pay. I urge everyone to talk to their medical people about fighting back. It helps to know you’re not alone in believing in freedom.

Just saw this. Get a load of what those exchanges are going to cost. What a deal.
But remember..Obama wont allow the middle class to endure any tax increases.

Reminder for the suckers that bought in to the Obamacare magic narrative that consumers will save money. When something sounds too good to be true? Usually it is.

I will ever understand all this .

I recently paid full price for an ACL reconstruction by a Harvard post grad trained knee specialist for a full total from initial consults ,imaging ,day surgery in private hospital , surgery , full cost of all medical instruments used ,rehab,even the crutches for $12,000 .There is a guvmint subsidy of $1800 for surgeon fees & surgery imaging .

So as close as posible in a free market this is very affordable . Everything we wanted we got & we had no guvmint , no insurers to bother us.

I think people are realizing state and local efforts are the only way to counter federal-level money and power grabs. Surge away!

I recently talked to a gal who is retiring from a small medical clinic after 37 years on the job. The clinic started out as a single doctor/nurse operation but is now run by one of the local medical conglomerates.

She said that the job started out good and was fun at first. Over time, the paperwork increased more and more until the load became ridiculous, despite no increase in patients. Now she is just glad to be out of the rat race and figures it will get that much worse under Obamacare.

I have heard much the same story from a couple other people, one working at a nursing home and the other clerking at a small high school. The refrain is the same. Neither place has any more patients or students than they did 30 years ago, but the government paperwork has increased massively over time. This country is being drowned in paperwork, and, if it continues, our prosperity will be the first casualty.

More than 800 pages of draft regulations (and still “crafting!”) … what more could you possibly need to know to reject it?

Yes that is one reason I enjoyed the direct full pay .I only had one guvmint form to fill out for the rebate .

Other than that it wa just dealt with the Surgeon ,the Physio & their receptionists.

no insurance people either.