Posted by William A. Jacobson Thursday, December 6, 2012 at 07:00am 9 Comments
More Sharing Options

The truck was parked at Costco in Coeur d’Alene, Idaho last Sunday.

I had my camera with me, so I had to get a shot, and then realized that just one wouldn’t suffice (and I still may have missed a couple, it seems, though I was trying not to get run over.

After I got the pictures, as I was walking into the store, a man asked me what I thought of the truck. I smiled and said “awesome”.

He said “Well, I know the guy who owns that pickup, and, well, sometimes he can be a bit – radical.” I replied, “Sometimes we all need to be a little radical.” 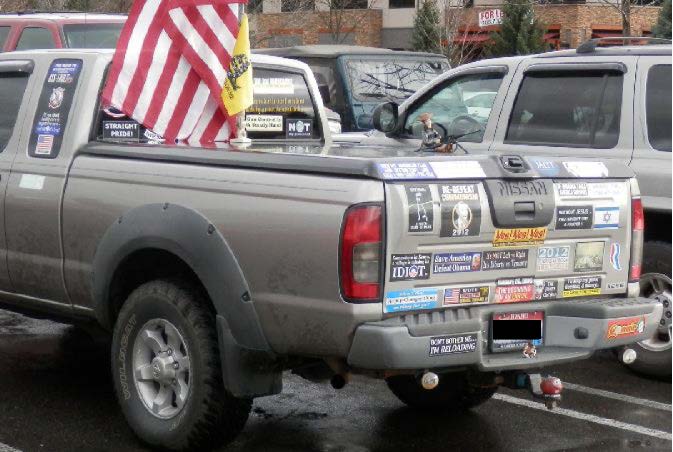 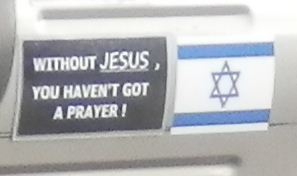 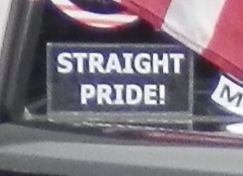 Well, it is not for lack of trying to improve the atmosphere in Austin. We put in Kelly Hancock and took out the RINO Todd Smith for y’all. What more can we do? 😉

When a vehicle like that can appear day after day in the Berkeley staff parking lot without being keyed we will have won.

Is that an action figure with a Ma Deuce on top of his bed cover covering his six?

Me and him could hang out.

It looks like Woody from Toy Story manning the Browning.

The only one that’s out of place is the American flag. America is hostile territory for anyone who believes in liberty.

Formerly the land of the free, America is now the land of hiring politicians to steal from your neighbors and to bully people you don’t like.

Horsepucky and other very strong words. America is still the land of the free and the home of the Brave. Still, there’s an enemy occupying force that needs to be forced to surrender its weapons of no-choice and to be re-educated at real schools of learning. Onward to victory in 2014 and beyond!

I’ve seen this truck parked around town several times. Keep thinking I need to stick around and see who owns it! Maybe I’ll do that next time I see it!

I get a kick out of living here. We’re on year two and for the most part it’s old time America. I especially love the breakfast and dinner fund raisers that occur all year long. Last year, one family was in dire straits and decided to have a garage sale to try and save their home. They put everything they owned in the sale. People would stop by and just hand them money for, say a couch, and then say, “Oh, I don’t have any way to take it home, you keep it.” They received enough money to catch them up on their back payments and saved the home and it’s furnishings. I love that!

George Washington was a radical, as was all the Founding Fathers. How does one fight for Freedom and Liberty, and not be a radical in that term against the status quo establishment.

The difference between anti-American liberal progressive socialist marxist radicals, and patriotic Conservative radicals is that when one is a radical fighting for Individual Freedom and Liberty against govt tyranny and oppression, then you are patriotic radical.. Whereas when one fights against the People for and on behave of govt tyranny and oppression of the people, then you are an unpatriotic anti-American Socialist Marxist radical- aka an enemy of America.

“A nation can survive its fools and even the ambitious. But it cannot survive treason from within. An enemy at the gates is less formidable, for he is known and he carries his banners openly against the city. But the traitor moves among those within the gates freely, his sly whispers rustling through all alleys, heard in the very halls of government itself. For the traitor appears no traitor; he speaks in the accents familiar to his victim, and he wears their face and their garments and he appeals to the baseness that lies deep in the hearts of all men. He rots the soul of a nation; he works secretly and unknown in the night to undermine the pillars of a city; he infects the body politic so that it can no longer resist. A murderer is less to be feared. The traitor is the plague.”
Marcus Tullius Cicero, Roman Orator – 106-43 B.C.