Posted by William A. Jacobson Thursday, November 1, 2012 at 11:15am 9 Comments
More Sharing Options

I’ve noticed a number of people taking direct action, putting their own money where their mouths are directly, rather than (or in addition to) donating to campaigns or other people’s SuperPACS.

It takes place in other ways as well.

We produced a video documenting Elizabeth Warren’s false claim to be Cherokee which has over 26,000 YouTube views so far, and will be running on computers throughout Massachusetts via video ads from now until the election using our own money.

It’s also taking place on signs and billboards throughout the country, as reflected in this photo sent by Cat from Sanford, Florida:

Saw lots of anti-Obama billboards on I75 northbound (around seven) between Wildwood and Gainesville this weekend which was interesting. One large pro-Romney signs that had been defaced outside of Leesburg too.

I’ve never experienced an election like this were private citizens or groups such as on this billboard are willing to pay this kind of money to get their message out. Wow.

It’s getting so ugly out here. People are more fed up than the polls indicate. 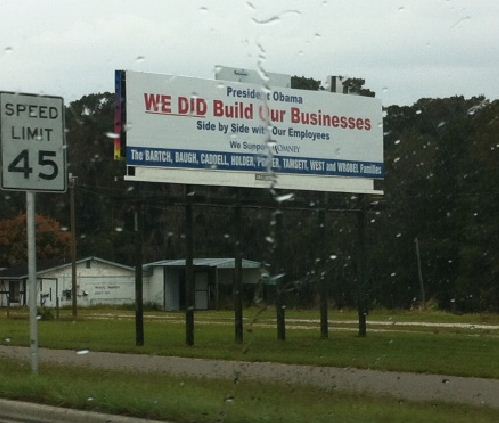 Along those lines, I picked up my wife yesterday at work in Golden Valley, MN – an inner ring suburb of Minneapolis (and in MN-5, Keith Ellison’s congressional district.) On a pedestrian bridge over Highway 55, the main 4-lane divided highway through the city (and the main traffic route for commuters) there was a man standing on the bridge, with a hand made sign attached to the fencing that read “America Deserves Better.” It’s been 40 degrees here, by the way.

I was stunned to see it, but I honked like hell. More than a few others joined me, and he gave us a huge fist pump and smiled. My wife looked at me and said “he’s been there every day for two weeks, in the morning and the evening.”

In Minnesota. Sure, it’s anecdotal, and it’s not a big billboard, but it sure was a morale booster. When I can, I’m going to join him with my own sign. Figure he could use a rest or some company.

The best direct action is to vote.

Second best is try to persuade your fellow citizen to vote for the best candidate.

But, as to Warren, I must say that no DEM I spoke within the last month was moved whatsoever by the fake indian facts or other credibility issues to vote for Brown.

It seems — quite clearly – that voting is not, for most people, about logic and reason. Rather, elections are about belief systems. For example, no DEM I know blames Obama or the DEMS for the massive increase in national debt. They refuse to even see it as an issue or a problem. Many people “believe” Obama is good at foreign policy without any evidence to support that notion.

This election, like the few before it, show that the US is in deep trouble.

We cannot even use logic and reason to convince people of the right course. Rather, the National parties resort to propaganda, distortions and lies — because that is what wins elections.

Up until about a month ago, there was a wonderful prominent billboard sign as one left the Tampa International Airport that was written in BIG, BOLD letters that stated “DON’T TRUST THE MAINSTREAM MEDIA”, or something similar. I was going to take a picture after viewing it several times, but when I had finally remembered to bring my camera with me, the billboard had been changed to something else.

That’s like shouting “Green Light!!” on a crowded highway out of Hope and Changeville.

Where’s DOJ on this abuse of freedom of speech?

Individual voter expression, wonderful. I think it underscores a well of support for Romney, albeit more anti-Obama than pro-Romney, that is going unquantified by polls or pundits.

In rural eastern NC, in an area that is typically Democrat by a couple points, I have seen dozens and dozens of Romney/Ryan 2012 yard signs and bumper stickers. I have seen just one Obama bumper sticker and no Obama yard signs. TV and radio ads in our area have been 4:1 Romney over Obama in number.

My phone began ringing off the hook in the last couple weeks with Romney taped messages and pollsters, to the point I recognize the numbers (or Caller Unidentified) and no longer answer, which says something, not sure what, about those who are still answering these calls. I have received no pro-Obama calls.

I have noticed a reticence among Romney supporters to place yard signs or bumper stickers and I get a lot of hemming and hawing when I ask why. The majority reason given is that they don’t want their vehicles or homes damaged, nor do they want to invite public confrontations, by Obama supporters. Despite coming of voting age in 1973, I do not recall an election campaign that created such fear among non-Democrats/non-liberals. To make people fearful is the same as making them angry. Fearful people tend to hunker down and do nothing while angry people act out on it. That can be – and, I believe, will be – done safely and anonymously at the voting booth.

I am changing my prediction slightly to:

I hear he’s on Romney’s short list for Attorney General, and why the hell not?

I second that emotion…!!!

We also need a group of people who will go at night and toss the boxes of bureaucracy (the ACA printouts) into the ocean. They haven’t been read anyway.