Obama’s last hand to play — The Other card

Obama’s last hand to play — The Other card

We have examined many times the claim by Democrats that Republicans try to turn Obama into “The Other.”

Now Obama is playing The Other Card, running an ad in Ohio which concludes with the statement that Mitt Romney is:  “Not One of Us.” 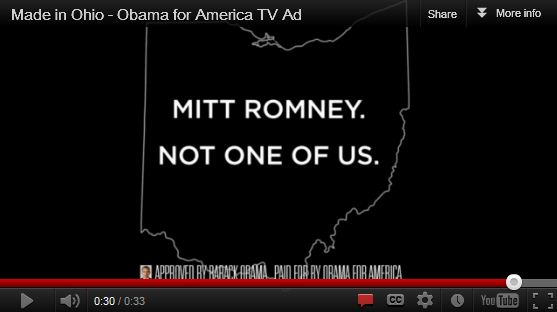 This is the last grasp of a drowning but dangerous campaign, a candidate who is revealing himself to us with each passing day as someone who gladly will drag under the nation in order to save himself.

When you have said your opponent is “Not One of Us,” I’m not sure what is left.

As despicable as this is, I think we will see worse in the next 2 weeks.

Sadly, you’re probably right. I’m not fearful, though. It’s more a case of how much longer we have to endure this (use your own descriptor).

My first thought at “Not One Of Us” was: “Oh, yes, Obama. You’ve so clearly demonstrated these past four years that you are! Would you cite a few examples besides walking, talking and eating?”

Okay, let me get this straight. You’re not of them, who’s saying he’s one of us while all the time he hasn’t been one of us, yet he’s accusing someone else of not being one of something he isn’t apart of himself. Riiiigggght! I think I understand.

Speaking of “despicable”, I read that Gloria Allred is waiting in the wings. I just hope that what Krauthammer said about Romney’s true: “He not only doesn’t have a skeleton in his closet, he doesn’t have a closet”.

Absolutely right as usual Professor!!! You say that Obama “is revealing himself to us with each passing day as someone who gladly will drag under the nation in order to save himself.” He is certainly not one of us!!!

Nice troll, but if the professor says he’s dragging the nation under, he’s explicitly saying that Obama is part of the nation and thus “one of us.”

I know you want the GOP to be the divisive ones, but you can’t run away from that fact that the Democrat party is the party of slavery, eugenics, segregation, class warfare and race baiting. And the GOP has fought you to preserve unity since its inception and will continue to do so despite your efforts.

Creepy Cult to Romney: “You’re not one of us!”

Is it true that Obama has ended terrorist and military casualties in Afghanistan by declaring all deaths there “workplace violence?”

Kinetic workplace events, I believe is the exact term.

Obama, the last hope of the Socialist Party, is going down like the Titanic… one deck at a time.

Said by ibn Dunham without a shred of irony. Who is ‘us’, Manchurian?

The politics of division. They used to say if you go to a city bus station, that crowd would represent the average voter. No presidential candidate is anything like them, nor would “we” want a president to be so average.

But having just watched D’Souza’s “2016”, it is quite clear that Obama is the OTHER. Not many of US were raised in a radical socialist/communist family, with a communist mentor that was watched by the FBI (with raw pictures he published of Mom). Most of us did not spend 20 years in a church that was anti-American, devoted to Black liberation theology.

If the door has been opened to question which one of these is like the American Dream, Romney wins hands down, and should have the response ad ready.

Of course the bankruptcy story was dealt with in the debate, Obama took GM through bankruptcy, but as judge, he rewarded unions. They clip Romney, but he says they will emerge stronger after bankruptcy, not that he’ll let them fail. Obama turned a crisis into a bonanza for the unions, while shorting senior debt holders. The ad is a lie, and needs a response.

The predicate for the whole ad is this…

Romney would have allowed the auto companies to go bankrupt.

The fact is they DID go bankrupt…in a highly perverted way.

Had they gone bankrupt according to the rules, they would be stronger than they are today.

And GM and Chrysler would not be fascist corporatist cells in the Collectivist body.

FWIW, here is the NYT article that is the source of this nonsense.

In the article, Romney’s basic argument is that giving US automakers a check will simply result in more of the same. The industry needs to stop applying 20th century solutions to 21st century challenges.

Nothing wrong with that. I opposed the Chrysler bailout 30 years ago. This is their second within my lifetime. When is enough going to be enough?

I’m convinced the whole purpose of his pursuit of the Presidency was to weaken if not destroy the United States.

Every major influence in his life has or had something to do with either the destruction of the economic system or the condemnation of the US or the institutions that make it work.

Top that off with a semblance of at least admiration for and apologetic to Islam and you’ve got the makings of a man who dislikes the country he lives in, dislikes the job he has and dislikes the people he wants to vote for him.

It’s no surprise that he’s turning in a lackluster performance and that his charade is being revealed slowly but surely.

I agree he is still dangerous and there is much damage he could do in the last months of his power.

That points out that perhaps it’s time to consider:

1. changing the date of elections to a weekend.

2. changing the turnover date of the Presidency to more match the current technology. Or at least put restraints on what a lame duck President can do.

3. Making a full and ruthless assault on the liberal bastions of the country by regulation of by boycott.

The entertainment industry. (tax it)

The Press (regulate it by requiring that it be more transparent as to the politically leanings and the influences on who writes and edits what appears as news.

Education. The education Industry is a hot bed of discrimination towards any other political ideology than liberalism. Higher education also has continued to raise it’s prices in spite of the sinking economy and is the root cause for the indebtedness of a growing number of graduates.

Let’s attack liberalism in it’s home bases and at least broadcast their hypocrisy and monopolistic bent.

Let’s make them uncomfortable to be as bigoted and biased as they are.

First let’s stop funding PBS except in areas with NO OTHER STATIONS EXIST.

2nd reductions across the board in all departments. By spreading out the pain, everyone takes a hit but no one gets singled out for a bigger one than anybody else.

That’s all it would take for a turn around; force the government to draw back and stop funding and enforcing rules that reduce incentive and economic activity.

I just watched 2016. My stomach was tied up in knots. I cannot believe that so many people were deceived by this imposter. The MSM and O should be sent to Siberia never to return.

This ad only works if the viewer is: 1)ignorant of what “bankruptcy” means (and unfortunately, I think many many people don’t understand basic economics and bankruptcy restructuring); and, 2) believes that the ‘auto industry’ is solely GM.

Perhaps there are plenty of people in the Buckeye State who fit item #1, but I guarantee you that anyone who lives above I-80 knows full well that the auto industry is not solely the big automakers. Just ask the Delphi workers who got the shaft from Barry’s “rescue” of GM. Perhaps The One was foresighted enough to make GM a subsidiary of the Federal Government so that at the precise time the mission in Libya needed security (i.e., the continued use of a DC-3), those funds were diverted to the Vienna Volt Parade’s new charging station….

It was not so very long ago, that the Great Pretender came.
He had an “air”; he had “flair”; but he didn’t have a name,
He had often just said “present” when the time for voting came.

He was the perfect Manchurian Candidate, his past shrouded and obscure,
He seemed articulate, so “bright and clean”, and so willing to “endure
The sacrifices” of the Presidency”—OF THAT HE WAS QUITE SURE!

He conquered the fools; ignoring the rules which had served us in the past—
A “vetting” process with power to weed the good from the evil and crass.
His “handlers” learned that the cry of “RACISM” ended all questions, FAST

A few of us warned, but were so quickly scorned, when we cried “IMPOSTER AND SHILL”
But the facts were free, for any to see, he had trumpeted his unholy will:
“I am a blank screen” for you, he had written, project on it as you will.

There was pomp and celebration when he pulled the wool over our eyes.
He mimicked Lincoln; FDR and King—“I am Reagan” he once lied.
“I will heal the land and calm the seas”—such brazen, blasphemous cries!

At “four years in”, our world’s in a spin, and his flaws have “come home full bore”.
He has squandered our fisc*, we’re a nation at risk for bankruptcy, chaos and war.
And the only plan we hear from this man is “I HAVE TO SPEND SO MUCH MORE”.

There were so many lies and he’d the perfect disguise to betray us and our land.
“Muslim hostility will ease” he claimed, the FIRST DAY I take command.
But our flags now burn; our people are dead; our embassies gutted in Islamic sands.

IT WILL NOT CONTINUE. ENOUGH HAVE SEEN THE TRUTH.

Contribute; “talk up” R & R to family, friends, co-workers, neighbors; pray; attend the church or synagogue of your choice, AND THEN VOTE

Sadly they said it right the first time.

Say No! to FORE more years.

I wonder what the 4th Estate will do after the landslide? Retire or retard.

“I wonder what the 4th Estate will do after the landslide? Retire or retard.”

Try to cover up all the shenanigans that will take place between Nov. 7th and Jan. 20th.

I understand why Obama dislikes the actual job of being president. It’s hard to muster enthusiasm when one’s goal is destruction.

I understand why Obama dislikes the actual job of being president. It’s hard to muster enthusiasm when one’s goal is destruction. It’s much more fun to play.

As Bart Simpson once said to sister Lisa, “Welcome to The Others.”
I consider it a feather in my cap to be counted as “one of the Others” as Romney should too.
#mittmentum

Sick and ***king tired of all the loathsome, despicable, moral midgetry and gasping desperation from The Boy King & his thugs-slugs. My God, we need to be utterly rid of them. Mitt and his Missus will need to fumigate, scrub and sanitize the White House.