The Massachusetts Republican State Committee has sent out a mailer, forwarded to me be a reader, which hits Elizabeth Warren very hard on her false claim to be Cherokee.

The mailer is very well done because it presents a lot of facts, including a timeline of Warren’s changing self-identifications as White and then Native American, as well as her initial denials.

That the Warren campaign and its supporters are trying to claim challenges to Warren on this issue are racist reflects that this issue hurts Warren.  As previously noted, a recent poll showed that the issue makes 30% of independent voters less likely to vote for Warren.

Here are some images, with the full flyer embedded below: 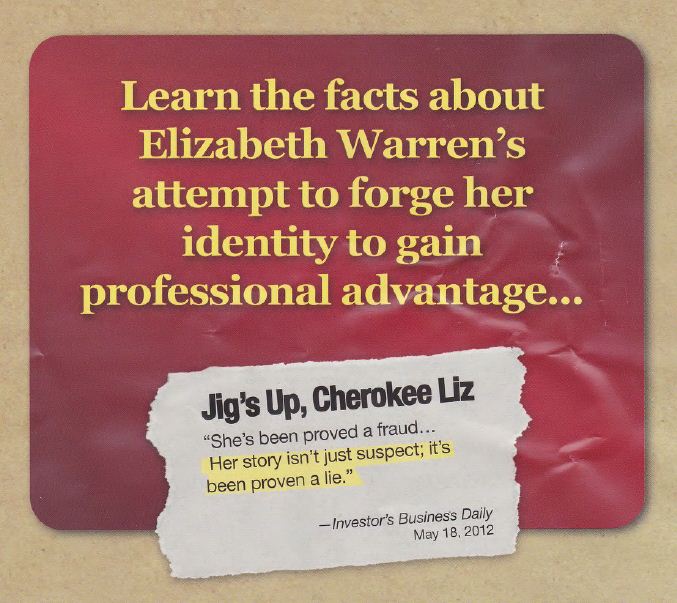 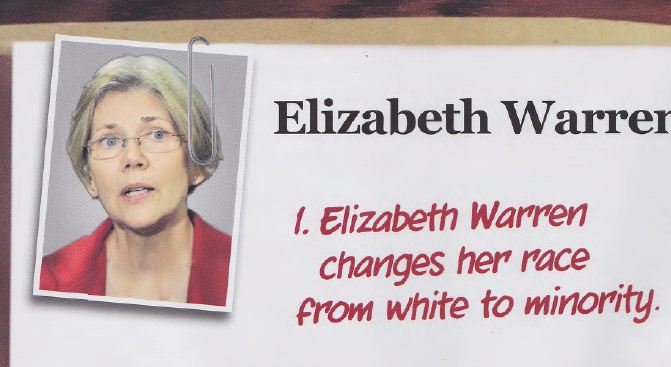 The Mass Republican Party needs to spend the money and directly rebut Prof. Warren’s ‘my parents eloped’ TV commercial, and make it clear the issue is not her family, it is using a false claim to make Harvard hire her as Faculty despite not holding an Ivy League degree.

The ‘Indian’ claim is irrelevant – she could just as easily have claimed Pacific islander, except Harvard needed a Native American faculty member to claim on Federal diversity forms. And Harvard claimed so twice, even when she was just Visiting faculty. One can infer it clearly helped her selection.

The Mass Republicans have not effectively rebutted her ‘Scott Brown is attacking my family’ claim, yet. They have less than 30 days to do so.

The words “attempt to” are unnecessary, she did.

MassLive has a new poll out: Warren up by five, but Brown gains one point from last poll.

Warren’s unfavorable ratings have shot way up this time:

At the next debate, Brown needs to ask Warren why she has refused all requests from Cherokee groups and Geronimo’s grandson to meet with her.

It’s difficult for me to fathom how Warren staffers, in light of all available evidence, continue to support and work on her behalf. It’s one thing to wholeheartedly believe in liberal ideology and support an honest moonbat; I can buy into that. It’s entirely a different matter to support a charlatan who is patently fraudulent and dishonest.

This election cycle has revealed how the dems and too much of the country are willing to excuse blatent lies from their politicians as a matter of course. If all this succeeds . . . .

Surely even the most committed progressives are now fatigued with the near incessant cries of “raaaaacist” in reaction to so many issues. It’s like a baseball game with a solid starting pitcher. You get excited with the first strike out. After a while you start to focus on your hot dog or you beer. Strike out number 5 has almost no meaning (even though the upper end might – breaking or equaling records).

The cry ‘racism” is essentially the same as “nuh-uh” even to liberals, isn’t it?

posted on my end, credited to LI and linked
http://www.theconservativevoices.com/news/_/fauxahontas/warren-fake-cherokee

if any of this is wrong just let me know

Browsing from my undisclosed Massachusetts location, I can confirm that on nearly every website I visit I see an “Elizabeth Warren is not who she says she is” ad from Scott Brown on the sidebar. They are doing a good job of covering the web at least.

Finally: pointing out the flying obvious.

It’s really sweet to see a lyin’ fraud of a masked character being revealed for what she is.

Now, Romney has to continually pound the pavement to expose the fraud-in-chief residing in the White House.

I beginning to feel that Scott Brown’s seat is safe…

I know, because well they’re my neighbors. I had a Warren volunteer knock on my door today, he was nice and friendly. While I told him I was not supporting Warren, I did tell him some of my relatives were and I wished him luck, because at times people can be rude to the volunteers. I don’t take out my disagreements with Warren over her volunteers.

But Warren is ahead of the polls, the 2010 get out the vote effort was very strong for the Democrats two years ago and it worked. Warrens commercials are constant, ‘she is working for the middle class and she is a fighter’. When it comes to voting Democrat, people are just ‘born that way’.

The most recent poll has her ahead. No one cares, the individual from the BBO gave her the cover.

I feel bad for the primary challengers, there were at least four of them and all of them stepped aside for Warren. Only one put up a fight.

I will cynically point out that many of them are probably getting paid to campaign for Warren. She’s out-fundraised every other person in the race, incumbent or challenger, and can use that money to pay people to campaign for her.

Other campaigns rely on volunteers to phone-bank, knock doors, do stand-outs, write letters to the editor, and deliver yard signs. If you pay people to do some of those things, you free up your volunteers to do other tasks.

Scott Brown’s seat is not safe. There are lots of low-information voters here in Massachusetts. Several co-workers, who are otherwise normal, have EW stickers on their cars. They are suburban types who care about “social justice” issues and fear the Republicans will take back the Senate if she loses. (Really is her biggest selling point, I’ve heard people repeat it.)

As for the mailing, I’m only sorry it didn’t have room for the “Ancestor SHOT an Indian” story. Her only claim to fame is the blood on great-great Paw-Paw’s hands.

Tell them they don’t have to worry about that as it looks like Linda McMahon is going to win in Connecticut.