If it motivates you, it can’t be that bad

If it motivates you, it can’t be that bad

Some of us want Obama supporters to cry themselves to sleep on November 6, others just want to wipe the smug grins off their faces.

I say, why not both?

I don’t know what it is about the “It’s Working, You’re Welcome” sticker that gets under my skin more than most others but it has the effect of temporarily clouding my vision. The sheer arrogance, the CHUTZPAH of such an assumption…

I’m a reluctant Romney supporter but I’ll get behind almost any candidate, any cause, that would wipe the smug grin off the driver’s face. 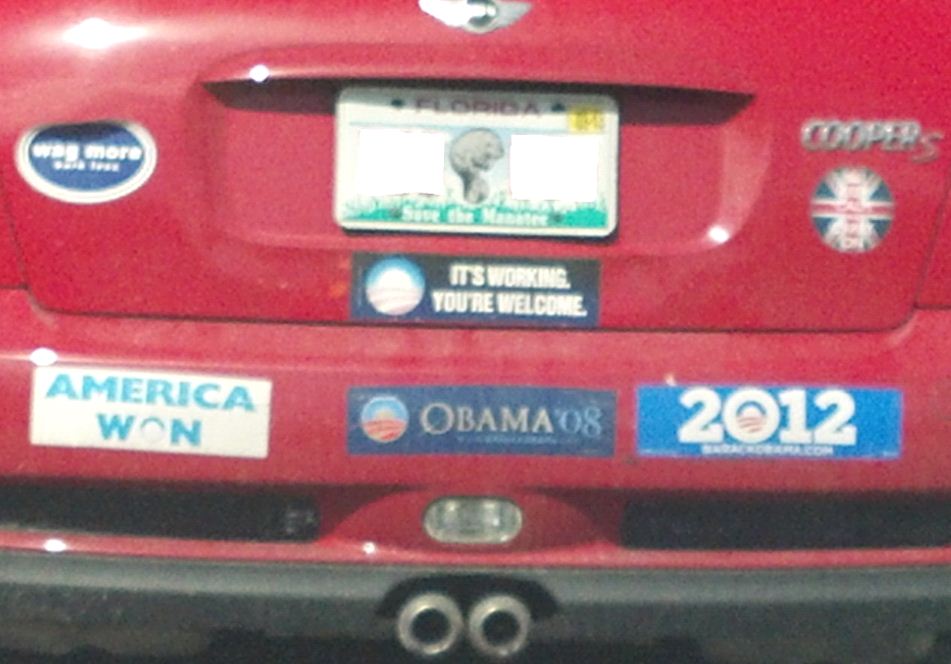 It really is the ultimate expression of limousine liberalism. “It’s working” means “I feel good about myself.”

It’s working for that person because he or she is doing well but many people are suffering in silence because the press doesn’t report day after day about their suffering as they would if a republican were in office.

When I see that bumper sticker I think of Kevin Bacon in Animal House: “Thank you sir, may I have another.”

With any luck the grown ups will take over come November.

As I’ve suggested before, there are opportunities for creative vandalism here, taping the word “NOT” over the word “WELCOME”.

Guess what, folks? That person probably believes the content of that bumper sticker. Today’s San Diego Union-Tribune has a letter from a reader, chiding the paper for publishing an editorial asking for an investigation of the mess in Libya as an “act of unpatriotic political desperation.”

That person seems to think the President Obama has done a much more aggressive job of protecting us from jihadists than Ronald Reagan and both Bushes.

This IS California, but letters with this level of ignorance about current affairs and recent history are a common feature of this paper.

Did that writer offer any example beyond the killing of bin Laden as proof? It’s my experience that devout Obama supporters rely exclusively on that event to convince themselves he has been ‘aggressive’ and effective in fighting back terrorism. I wonder, does the paper even cover some of the most current realities in the region, such as the continued strengthening of the Taliban and their murderous actions even against other Muslims as well as non-Muslims? Have they covered the Bengazi attacks with any honesty? The writer might be echoing the paper’s effectiveness as reporting right back at them. After all if they ignore the detrimental stories to a certain degree, the writer might be able to cite that very paper in evidence!!

If asked, many die hard progressives I talk to would mostly likely rely on the exhausted line, “It would have been so much worse, if _____ (fill in the blank)…” Emotion works well when you are given ammunition that cannot be proven. Some of the most hard core progressives even consider increases in social nets like unemployment payments, among others, as a ‘working’ federal government. To those who truly believe that most every corporation is evil and run by near-criminals, taking tax dollars and giving them to victims (or the 99% in some people’s language) is fair and balanced. You’d be surprised how many in academia share that emotion when pressed. Maybe most here wouldn’t be surprised…..

Waiting for this bumper sticker…

If Romney wins, we’ll all be cotton-pickin slaves

Yet another little red commie Cooper Pooper like was featured a little over a month ago ! Could the sanatimonious crypto- commies be cloning them? !

If this is their idea of “working”, I’d sure hate to live in their definition of “failure”. 🙂

Yet another little red commie Cooper Pooper like was featured a little over a month ago ! Could the sanatimonious crypto- commies be cloning them? !
——————————-

You have to keep in mind that the University of Florida is in Gainesville. The only people that will vote for Romney, are the small business owners that have to serve this smug assholes their meals, etc…

I am coming to believe that most people on The Left live every moment of their lives in pure, agonizing misery. From Granny, we all know too, that misery loves company. To that end, they can only be effective if we let them bring their misery upon us… or if we let them run the country. Then, it becomes misery by edict.

That’s why I am all for legalizing pot. And mushrooms. Let’s chill out these perpetually butt-hurt crybabies, or at least make it so they all pile up together like rats fu*kin’ in a wool sock and leave us happy folks the hell alone.

The end result is that happy people don’t put stupid bumper stickers on their vehicle, unless you consider “Follow Me To Joe’s Crab Shack” or “See Rock City”, stupid.

Nope. No legalizing drugs. You’ve forgotten about the consequences; particularly to us that have to pick up the pieces of the trash they leave behind (health care, traffic accidents, etc).

Well, then let’s just make booze illegal, too. That worked so well the first time, and now keeping ______ illegal is having the same resounding success. I guess I’m more libertarian than anything else.

And I’m also for drug-testing for anyone getting state assistance or welfare benefits.