From reader Chris in Massachusetts:

Spotted in the parkinglot of a MA Texas Roadhouse Steakhouse. 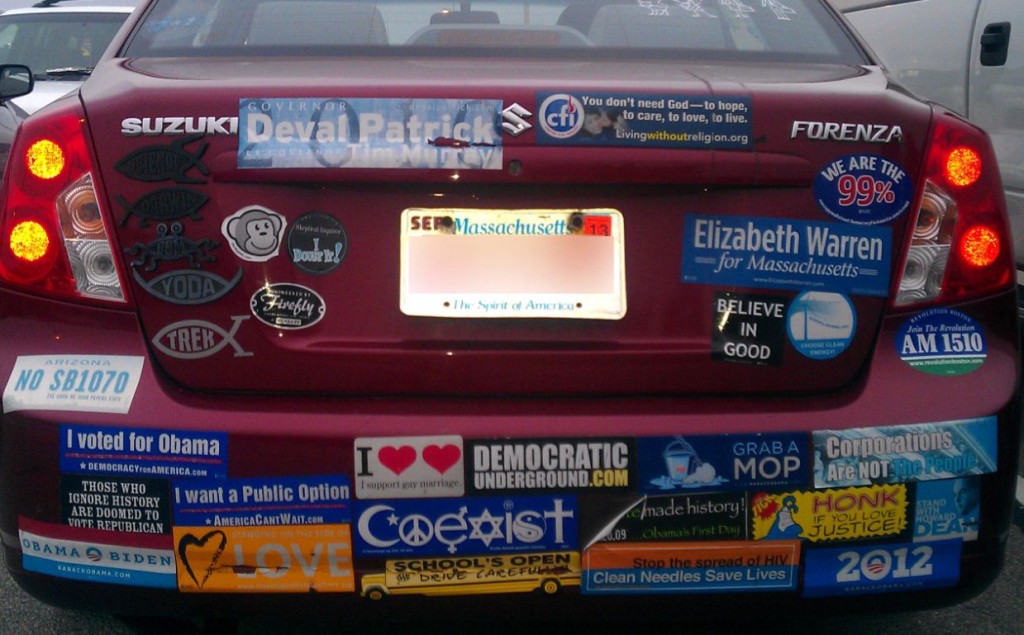 Must be the angle of daylight.

Lights are on, nobody home in more ways than one.

Itsa’ MIDGET owner in more ways than one.

As a Massachusetts resident, let me point out that it’s people like this who carry the moral responsibility for putting the likes of Ted “Manslaughter” Kennedy and John “War Zero” Kerry, into office!

You know, the folks that changed D-MA to DuMbAss! 😉

Sadly, we Rhode Islanders are responsible for Patches. But it was the MAholes that spawned him!

Well, not really as he was an “import” who attended PC then decided to stay and ran for the legislature which in turn allowed him to elevate himself to a congressional representative.

Does he still live in the state? I kind of doubt it.

We sent him to DC. That’s on us. (Not me, but you get the point.) And yes, he still lives here. He’s got a place in Portsmouth.

Another austinite from the Philosophical school of “Silly Emptiness”. MA Texas Roadhouse Steakhouse? I shudder to think what they actually serve as something “Texas”.

Them thar’ Tejas roadhouses are all over.

Every time I visit RI, I’m tempted to try the one in Warwick but just probably would be disappointed…

I swear I see that car on my campus. Or some like it.

A picture of the denizen of this (mis)carriage of tolerance would have been even more instructive!

I wonder which one was used to cover the Kerry/Edwards bumper sticker? LOL!

wonder if they would benefit from a 12 step program

No, this person would not benefit from a 12-step program. I’ve seen those in the movies, and an individual starts with standing up and saying something like “Hello, My name is Doug and I have a problem…..” Since they are incapable of recognizing they have a problem, they are not open to receiving help for said problem.

THE TWELVE STEPS FOR LIBERALS

We admitted we were powerless over the results of liberalism—that American lives had become unmanageable.

Came to believe that a Power greater than ourselves could restore the US to sanity.

Made a decision to turn our political will and lives over to the care of God as we understood Him.

Made a searching and fearless moral inventory of ourselves instead of others.

Admitted to God, to ourselves, and to the GOP voter registration lady the exact nature of our wrongs.

Were entirely ready to have God remove all these defects of political philosophy.

Humbly asked Him to remove our liberalism.

Made a list of all Republicans and Tea Partiers we had harmed, and became willing to make amends to them all.

Made direct amends to conservatives wherever possible, except when to do so would injure them or others.

Continued to take personal political inventory and when we were wrong promptly admitted it.

Sought through prayer and meditation to improve our conscious contact with God as we understood Him, praying only for knowledge of His conservativism and the power to carry that out.

Having had a conservative awakening as the result of these steps, we tried to carry this message to others, and to practice conservative principles in all our affairs.

Heh, I missed an opportunity the other day as there was a Prius in my senior community with a bunch of stickers on it.

Actually it should be called the “Pius”, a much better description of its’ drivers.

Why would anyone willing devalue a $15,000 car by plastering it with stickers?

A “bumper” crop of bad views – enough to make anyone retch.

Why cry “herself” to sleep? Even if you honestly believe the owner is a woman you don’t know? I am a woman and I am fighting just as hard against Obama, the democrats and the idiocy of the left as most of you.

Double because I was a life long democrat woman – contributor, door knocker, sign holder, all around shouter and fist shaker.

You have somewhat of a point; I don’t see any pro-abortion stickers, but enthusiasm for Elizabeth Warren may be a tell. 🙂

As for your travel along the road to Damascus: git ’em!

It puzzles me why someone who has such questionable or wrong ideas would want to publicly display them. Why have they no pride!?

Reminds me of someone who’s lonely and desperately needs to create drama and draw attention to themselves. And also, because of that social isolation, had to find a group to join, and then loudly announce their membership.

Sort of like social misfit kids who join juvenile gangs, and then do whatever the group tells them, because they don’t want to be ostracized.

Hit the nail right on the head.

There’s always a chance he or she will pull the wrong lever, anyone who has that many bumper stickers is pretty much a loser regardless of which side they’re on.

[…] Legal Insurrection wants someone to cry themselves to sleep […]

I would gladly pay for birth control for the owner of this vehicle in hopes he/she/it never ever reproduces.

Conservatives might cry themselves to sleep, should 0bama win. Should he lose, lost souls like this will gather in the streets and 0ccupy something, or burn a police car or some foul act of similar ilk. The liberals aren’t going to be pleasant after the election, regardless of who wins.

My fear is that the lamer-duckier Prez will do all sorts of vile and evil with the power and time that remain to him.

That is EXACTLY what he’ll do.

I like the SB-1070 touch. AZ is on the other side of TX and a world away. The driver would probably visit neither since we are such savages, but going to the Roadhouse is like visiting some sort of museum.

They probably think that Texas Roadhouse is a decadent place to eat. They probably also think there is something remotely Texas about that place. 😆

I think I know this person.

No I don’t, but I know people with rear ends like this on their vehicles.

YEP, and so very, very, VERY MANY calls to Suicide Hotlines nationwide on that November 6th evening. MORE Rage than was caused by the Bush v. Gore Decision. Anger Management Classes nationwide, Full to Bursting!!

NOTHING makes me happier than Highchair Pounding Lib-Lefties at election time. Is that a tear of sympathy I’m feeling…? NOPE..Just a speck’o’dust!! (-:

I don’t know why you would delete the license plate number. After all, this vehicle is advertising its owners’s views on very public streets.

Blocking the number forces the owner to publicly claim that car before shrilly declaring themselves a victim of the “evil right-wing smear machine”. Since the owner is a member and financial supporter of D.U., they’re probably dumb enough to actually do that.

Notice that the Deval Patrick bumper sticker is so cheaply made that it has already faded.

My favorite: “Clean Needles Save Lives”. To that I respond to with, “But what about the smack that’s been stepped on with filthy cut?”

I’ll wager this person is a teacher or works in a “coffee house” (never a shop or even shoppe).

Heck, I want the driver of the car to be so despondent that he/she decides to flee the country

She’s cry herself to sleep on Nov. 7th after she comes back Earl Scheib and finds out how much it costs to re-paint her car.

I hope people aren’t refusing to put Romney/Ryan bumper stickers are their cars out of fear they can’t get them off cleanlly after the election. You can buy a bottle of adhesive solvent for less than $10 that takes them right off, glue too, without damaging the paint.

No mention of “to continue beyond death.”

Actually, they left off the “funnest” part of living without God: you get to have all the irresponsible sex you desire, because you can chop up the offspring and vacuum it away! Yay! Fun, fun, fun!

In fact, if you’re a REAL atheist like Richard Dawkins, you can kill your kid up to the age of two! Then you can get right back to partying!

Just one of many members of the Cult of Human Omniscience, which takes BLIND faith to believe in, given the well-documented record of error and mendacity of the object(s) of its worship … and more faith, than it takes for me to believe in my Triune God.

Why is it that these people always drive Japanese cars?

Obama “saved GM” with no help from this person.

I am in shock. Someone as enlightened as this genius doesn’t know they serve meat at a Texas Roadhouse.

Am I the only one who noticed the irony of the Firefly badge to the left of the license plate?