One of the most prominent progressive groups in the country is launching a major voter outreach effort on behalf of 20 congressional campaigns, calling it the “crown jewel” of its election functions.

The Progressive Change Campaign Committee hopes to place one million phone calls to targeted voters through the effort, named “Call Out The Vote.”

President Barack Obama, with whom the PCCC has often had a contentious relationship, won’t be a beneficiary. Instead, the group will direct its resources toward down-ballot races, in hopes of building a progressive base in the halls of Congress.

Elizabeth Warren, the Democratic candidate for Senate in Massachusetts, is the marquee candidate, with organizers hoping to make hundreds of thousands of calls for her campaign. On the House side, the group is gunning to return former Rep. Alan Grayson (D-Fla.) to Congress. Grayson will personally talk to volunteers making calls on his behalf.

But that’s not why I’m posting this story.  This image is: 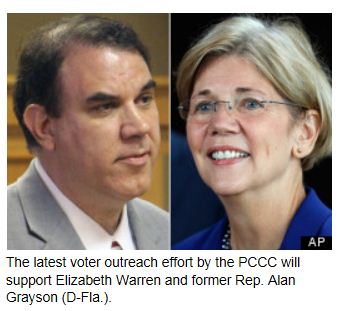 PCCC, where PC goes too far!

Free one-minute clip from Dennis Miller’s radio show about the last 26 days of the election. Dennis is fed up.

Excellent examples of the breed; liars, hypocrites, without scruple.

IMHO there’s a difference, Rags. If America collapses into despotism, the goo-goo voting bloc that takes us there will be delivered by people like Warren, whereupon they’ll be pushed aside by outright thugs like Grayson.

I can see them both in shiny riding boots and leather coats, herding the proles as good kommandants.

The people making these phone calls will most likely be recent college graduates unable to get a full-time job. At this point, there are three years’ worth of recent college grads trying to land a full-time job who can’t get their foot in the door because organizations aren’t hiring for entry level positions. So instead of a real job, they will take this temporary piecework for $10 an hour to make phone calls for a slate of liberal candidates who are actually multimillionaires.

Just how enthusiastic do you think these phone calls are going to be?

1. No matter who wins the Presidency, we could see a Radical Caucus take shape in the Senate: Sanders, Baldwin, Warren, & ?.

2. IMO the PCCC is not neglecting the Presidency; they’re positioning Warren for it.

Elizabeth Warren, the Democratic candidate for Senate in Massachusetts, is the marquee candidate, with organizers hoping to make hundreds of thousands of calls for her campaign.

Fortunately, Scott Brown has the MA Tea Party behind him to offset the PCCC’s get-out-the-vote machine. Oh, wait. He pretty much flipped them the bird after they got him over the top in 2010.

4. Warren supporters will vote to put Warren in the Senate. When I vote for Brown, I won’t really be voting for him: I’ll be voting to keep Warren out of the Senate. Does that imply an enthusiasm gap?

5. The sleaze factor obviously works against Warren, but it’s not clear how much MA voters care.

6. If Brown loses, which is not inevitable, his alienation of the Tea Party will likely be the decisive, unforced mistake. IMO many Tea Partiers, viewing Warren, would have been politically savvy enough to rally behind a centrist who treated them with respect.

I agree with everything you say about Brown; but, while I am not officially a Tea Partier, I believe they are mature enough and patriotic enough to put aside any ill will they might feel toward Brown and do what is right for the country by voting for him. Come to think of it, I keep getting e-mails from the Tea Party, so I think I’ll just do like Warren and claim to be one anyway.

As someone who has logged hundreds of hours making GOTV phone calls, I have found the public reaches a saturation point where more phone calls for your candidate actually hurts more than it helps. You can hear the disgust in their voice when they tell you that while they support your candidate, they want you to stop calling them. If the campaign doesn’t heed that, there’s a real risk they’ll lose the vote. In MA, we all know Obama is going to carry the state, and it doesn’t by how little or how much at the end of the day. Very few of the congressional races are hotly contested so for most of us the Brown/Warren contest is the only horse race. I actually hope that the Warren campaign calls every voter at least ten times with all that PCCC money.

This represents the best that the democrats have to offer. Pathetic.

The nauseating Alan Grayson was tossed out 2-years ago after flapping his idiot jaw for 2-Freshman Years in Congress. Dan Webster handed the feckless one his head. Now,Grayson is BAAAAAAACCCKKKKK, running in another district here in Central Florida. Blessed is what we is.