The countdown continues with 10 days to go.

This week I thought it would be fun to roll out some of the wonderful “teleprompter” photos that were submitted.  I’m sure that the clearly desperate and grasping President Big Bird, Binders, Bayonets, and “Bull$#*tter” wishes he never left home without his teleprompter feeding him lines designed for a president . . . and not for a peevish twelve year old.

Our first Empty Teleprompter Chair photo comes to us from Nancy in Texas. 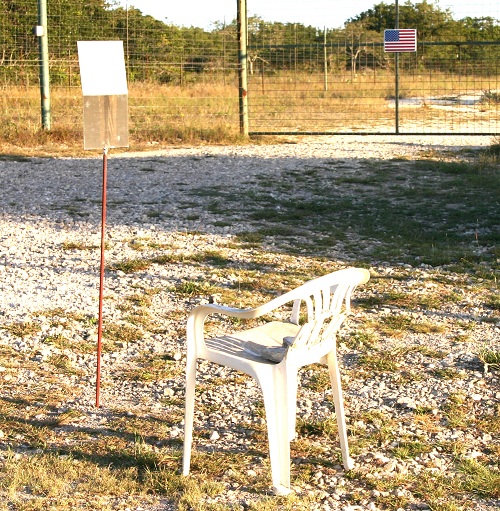 Somehow this plastic chair sitting in a deserted, sandy lot speaks volumes to me.

The next great Empty Teleprompter Chair comes to us from Karen in Connecticut who writes, “Also added hat with begging demand to ‘Donate’.” 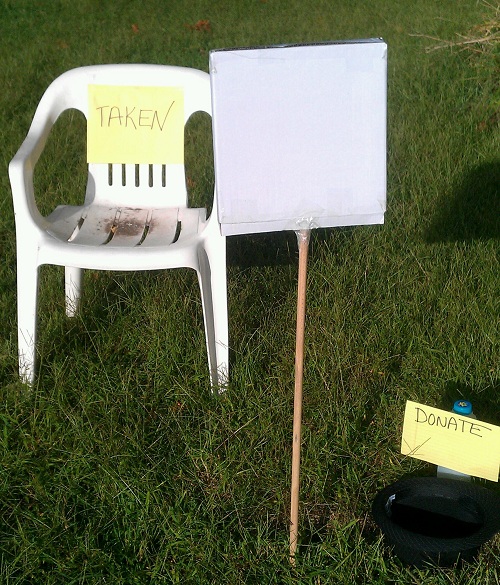 The hat is indeed a nice touch, as is the “taken” sign.  So telling that President Empty Chair’s response to the #emptychair campaign was  his own petty photo submission that “this seat is taken.”  What has he said about Benghazi?  Oh, right, he’s busy calling Mitt Romney names and babbling about Big Bird while begging supporters for their wedding gifts.  “Taken?”  Hardly.

The final Empty Teleprompter Chair was submitted by Dan in California who writes, “… with patented cracked teleprompter mirror.” 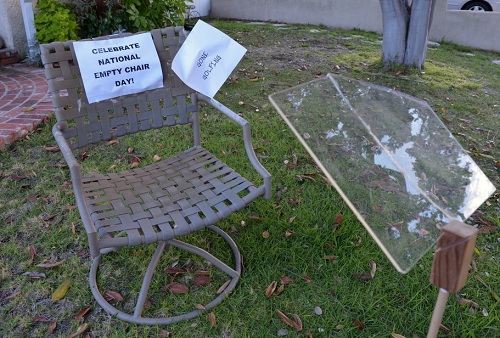 What better way to capture the essence of a Narcissist in Chief who is incapable of extemporaneous speaking than with a cracked teleprompter mirror?

The smaller sign reads “Gone golfing.” I wonder what such a sign might read today, in light of all we know about the Benghazi terror attack? 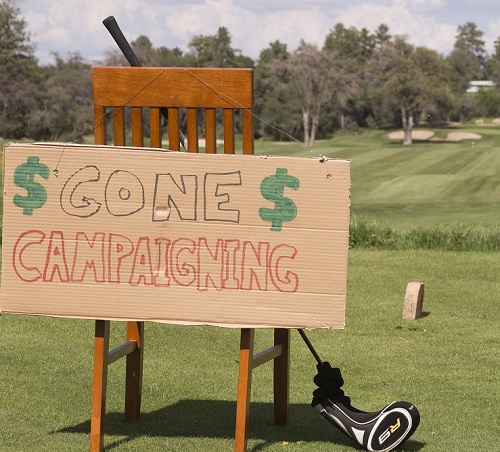 After all, that’s how this Empty Chair president responded to news that an American ambassador and four American heroes were slaughtered in Benghazi: a campaign trip to Vegas, Baby!

It’s not golf, nor an empty chair. Yet, it’s ironic what Rickles has to say. Note, also, the date.

Rickles is a prophet!

Elizabeth Warren gives me the creeps

In the 1st picture that woods in the background begs to be hunted for rabbits with a 22 & a rangey raggedy yella dog.

After all, that’s how this Empty Chair president responded to news that an American ambassador and four American heroes were slaughtered in Benghazi: a campaign trip to Vegas, Baby!

Let’s not forget what he said in Vegas about those murdered Americans to his campaign workers:

“The sacrifices that our troops and our diplomats make are obviously very different from the challenges that we face here domestically but like them, you guys are Americans who sense that we can do better than we’re doing… I’m just really proud of you.”