I had the pleasue of spending a full hour on the radio with Dan Rea at WBZ 1030 (CBS Boston), a true superstation that covers all of New England and into New York.

Dan made a point during the hour that character matters, and that Elizabeth Warren’s character is a legitimate issue.

I had a chance to explore both the Cherokee and law practice issues in a depth not normally permitted in the mass media.  It’s one of the reasons why I love going on Dan’s show, no need for 2 minute sound bites. Here’s the audio:

Proving the point, Brown has pulled ahead by four points.  I don’t think you can read too much into it, since prior polling tended to show Warren ahead by a similar margin. We’ll find out in coming days whethe it is the start of a trend or an outlier.  This was the first poll taken after the Romney-Obama debate, so perhaps Brown is getting a Romney bounce much as Warren got a DNC bounce.

More important on the characgter issue, the poll confirms that the Native American issue is important to a significant percentage of the electorate, Viia WBUR: 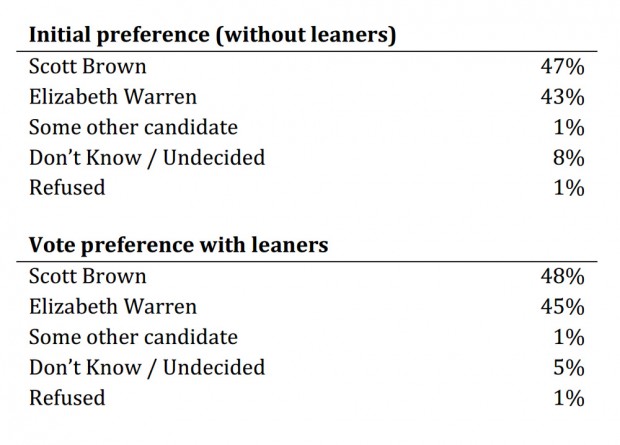 On the Native American issue, fully 30% found it very important or somewhat important in how they will vote:

And in a race which swings in the polls by a couple of percentage points in either direction, it could be the difference.

Which is why we are not giving up on either the Cherokee or law practice issue one bit.

Saw an article in a local Mass paper this morning that said most Mass voters blame Scott Brown for the negative tone of the race. Regardless of the validity of the poll, could it be because there’s so much negative to say about E. Warren?

Remind me not to piss this guy off.

At least he’ll tell you if he’s admitted to practice in your state.

You see, Professor Jacobson was in class the day they taught law at law school.

Note to self: don’t drink and tipe.

Warren supporters are pretty aggressive right now, willing to throw anyone under the bus. I really dislike my own character being challenged as a liar, when discussing Elizabeth Warren.

Actually it makes me ill.

They are not challenging your character…

They are revealing their own.

You live here, you know what I mean.

Stand up and tell them, “*** damn it, you’re wrong. I know the facts. I have researched this issue myself and have drawn my own damned conclusion. And if you would stop following these idiots like a blind lemming and look objectively for yourself for one damned minute you’d see that you were being had, hoodwinked, deceived, lied to.”

And do it while poking your index finger into their chest, too.

It’s time to get MAD, Renee.

Let them have it!

I followed through with links back in May from Boston.com and ABC news that showed the time line. She was always white, until the late-80s as listed as a minority in the faculty directory, then she stopped in 96′ when she got tenure at Harvard a long with the ‘Harvard’s First Woman of Color’ in 07′.

What I got in response?

The majority of Americans have more minority in them, then Elizabeth Warren believes to have.

The idea that even if she was 1/32 of anything to list herself as a minority in a professional directory is mind-boggling in any other circumstance, but this is Massachusetts and the Democrats MUST take back their Kennedy seat.

Imagine Scott Brown having enough influence to carry MA for the Romney camp. I think that may be a possibility should trends continue as they currently are.

Enough of the faux Indian AND faux president…

Very unlikely that Brown pull enough for Romney. Even though the race has been tight for Senate, the state continues to swoon heavily for Obama. His lead in MA may be the largest proportionately in the country.

Boy maybe you guys are seeing something I’m not but I think Scott Brown has already lost this race. This Indian thing was a strategic error on his part. I hope I’m wrong.

If he’d lost the race, he wouldn’t be up 4 points a month out. Brown has been blessed to run against two of the most ridiculous harpies MA has to offer.

He has a huge hurdle though, Obama will win Massachusetts and it is unclear how many voters will split off to Brown. Hard to know how many will defect under secret ballot.

The Western NE poll had Warren +5

That was an older poll. The WBUR poll is the most recent one.

Additionally, the older poll stated that Brown was strengthening, and that Warren’s unfavorables had shot up. Brown also ticked up in that poll from the previous one.

That was an older poll. The WBUR poll is the most recent one.

Additionally, the older poll stated that Brown was strengthening, and that Warren’s unfavorables had shot up. Brown also ticked up in that poll from the previous one.

If he loses the race, it will be because he alienated the Tea Party people who got him elected in 2010. After he came out as a centrist, a fair number of them would have stopped supporting him no matter what; a fair number would have kept an open mind had Brown treated them with respect and listened to their views. The latter group of Tea Partiers would have worked their tails off to keep Warren out of the Senate—but not they’re not working on behalf of a candidate who kicked them in the teeth.

Brown may not lose, but his situation allows very little room for error.

He’s always been a centrist and any TEA Party folks who thought he was anything else were kidding themselves. He won last time because of Obamacare…and Martha Coakley being awful.

So many interruptions and commercials. bah! I’d rather ready blog!

But still really great story is being covered by Dan Rea

What I think is the elephant in the room for Democrats is that Obama has polled as a heavy, heavy favorite in the state even up until now, when the rest of the country is gradually leaving his side. In such an environment, Warren hasn’t been able to command much of a lead over Brown. In fact it has been a back and forth race all along according to most polls. That suggests that even in state that takes pride in electing Democrats, she can’t get momentum. She has quite a few flaws, apparently. Personally, I don’t think the state is as progressive as her campaign thinks it is. But we will see.

Essay in The American Thinker about how Jacobson’s research on Warren has shaped the race: http://www.americanthinker.com/blog/2012/10/something_important_is_happening_in_massachusetts.html

Character only counts to people with ethic and principle. If Warren had any character or principle, she would resign, as it is, her sociopathic self does not realize she is disgraced as a liar.

That Dan Rea guy is a terrific interviewer. He kept the callers, who often have a tendency to drift off topic, focused and on point. And the audio podcast replay version that I listened to is commercial free, so it is even better.

It really was enjoyble to listen to because Prof J has total command of the facts and can effectively communicate them, and Rea not only asked the right questions but also kept the callers from straying off course. Good stuff. Thanks.