I’ve been documenting the presence of the Chicago Teachers Union at non-education-related, radical protests over the past year. From Occupy to Anarchist, gay pride, and anti-NATO protests, the union deploys its members not on the basis of “for the children” but rather for political solidarity.

On the first day of the strike as teachers refuse to accept merit pay and a 16 percent raise over four years, those groups that the Chicago Teachers Union supported are repaying the favors.

Today, an Anarchist march in Chicago rallied the Four Star Anarchist Group members in support of the teachers: 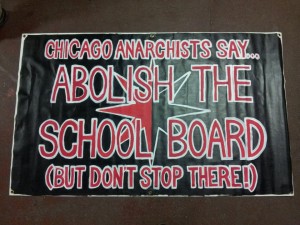 Flashback to this past June, at the Chicago Gay Pride parade, the Chicago Teachers Union’s float featured the President and Vice President of the Union partying while members in red shirts marched in the parade:

In the meantime, some groups are calling on President Obama to join the picket line, citing his statement in 2007:

“And understand this: If American workers are being denied their right to organize and collectively bargain when I’m in the White House, I’ll put on a comfortable pair of shoes myself, I’ll walk on that picket line with you as President of the (USA). Because workers deserve to know that somebody is standing in their corner.”

The CTU isn’t afraid to call in the favors of their radical leftist allies. They’ve even put together a “solidarity fund” on their website where they are accepting contributions:

We are asking you to support our struggle for educational justice. You and your organization can show your support by making contribution to our Solidarity Fund. All donations will be used to conduct broad outreach throughout Chicago and nation-wide.

It is hard to get the public to buy their message that it’s “for the children” when the highly paid teachers reveal that the fight is one for anything but the children. Joy Pullman at the Heartland Institute says:

This strike hurts those who can least afford it so that teachers who earn more than comparable workers can continue padding their benefits at the expense of kids and taxpayers in a beyond-broke school district. What a shame.

Occupy, Anarchists, and the Chicago Teachers Union, all in solidarity, are using children to further their radical leftist agenda.

ROFL! I had to look up the YouTube video as well.

I’m actually on the side of the anarchists on this one. Destroy the Chicago school system as constituted. Start over with ALL new players and purpose. Put it back in true local control.

Such drastic measures are not remotely necessary. All you have to do is make union membership (dues) voluntary.

Then the union members will keep the union honest, and confined to its mission.

Valarie : What about the corrupt system underlaying it all. Simply getting rid of unions does nothing to address that. Unions are corrupt because they opporate in a corrupt environment , not because they are intrinsically corrupt. That said public employees should be barred from unionizing.

This is a poster sized warning to taxpayers that we need to get unions out of the public sector period!

It’s NOT how much you spend, it’s the methodology that is applied.

What an uncomfortable position the President must find himself in with the strike.
What a shame he couldnt have arranged things so it wouldnt happen during election year as he insisted with debt reduction deal.
It surely must interfere with the Mayor’s new job as campaign cash strongarm man.

Limbaugh suggested it’s all union game-playing so Obama can sweep in and save the day.

Maybe so, but I don’t see any advantage to championing the already highest paid teachers in the nation with a 19% raise. If I am a Democrat with functioning brain cells…..

Well, in Rush’s configuration, Obama wouldn’t be favoring either side. He’d be called in by Dead Fish for a closed door summit with CTU officials, they’d all laugh, drink wine coolers, play some poker, pretend to be working, then settle the contract to pre-arranged terms, leaving both Dead Fish and Obama looking like heroes. A crisis is a terrible thing to waste.

Actually, Rush didn’t seem to really believe this, and I think he put it out on the air just in case it was true, to nip it, as Barney would say.

I have a simple math assignment for Chicago students on their day off.

* Tools = urban slang for egotistical opportunists aka douche bags.
No rights reserved. Of course, in Chicago, that wouldn’t mean anything anyway!

SERMON: Typical Chicago solutions have proven CLUELESS for decades, and hundreds of billions. IT’S NOT JUST “SCHOOLS”: It’s unwed mothers; it’s a welfare life-style; it’s “trickle down” graft, where monies are spent LAVISHLY on the “friends, co-conspirators, and fellow criminals” of those providing it; it is family failures at catastrophic rates; IT IS A CULTURE OF CORRUPTION. [End sermon.]

Is this stuff even left-wing anymore? I mean, you have left-wing groups, slogans and banners and such, but they’re just going through the motions. At this stage, they’re just a bunch of pigs at the trough.

[…] have enough trouble with the union protesters in Chicago during the strike, now Chicago anarchists are getting involved as well. Share this:TwitterFacebookLike this:LikeBe the first to like […]

Teachers’ unions from LA to Haiti (Haiti?!!) join in solidarity with lots of Marxist rhetoric.

This “strike” may be spreading soon to a school near you.

(note: loyal socialist marchers, canvassers, protesters, and campaign workers are needed through early November, paid for by the unions, but not at union wages.)

I like plugging Professor Mark Perry’s Carpe Diem blog when I get a chance. Here’s some stats the good professor has highlighted to show the slave-like wages the oppressive taxpayers are currently forcing on Illinois teachers:

1. The highest-paid public school teacher in Illinois is a physical education teacher making $191,124 per year (I’m assuming this is a 9-month teaching “year”).

Facts. Nothng fancy; no vague claims, no opinions, no conclusions, just simple, everyday outrages that everyone understands. When the public sees this sort of thing, it makes it a whole lot easier for them to take a stand and it puts the bums on notice that the game is winding down. (See Scott Walker in WI and Chris Christie in NJ.)
Excellent post. We need more of this.
Thank you.

Huh. I spent four hours this morning in downtown Chicago, changing buses, but didn’t notice any demonstrators or strikers.

Part of the problem here: the Chicago school district is way too big.

There is no effective administration. The central school board is filled with hacks, dopes, fools, connivers and poltroons. They live on the fix. The CTU is a bunch of socialist jerks whose only thoughts for the ‘people’ is how to squeeze them for more.

There is no parental control. The school board is appointed, not elected. The local school councils are disasters, and many of them were taken over by Ayers-trained progressive types who bray a lot and accomplish little else (that’s one of the things Obama supervised in he was working education ‘reform’ as a community organizer).

There is no taxpayer control. There are no school tax referendums and no way for taxpayers to exert direct control.

There is no political control except by the mayor when the mayor is strong. Daley ran the schools, such as anyone could, through his appointments and patronage. Rahm doesn’t have that clout and so can’t control events.

My suggestion would be to break the CPS up into about 20 or so smaller districts. Then allow charter schools in each district, and give parents vouchers for their children for any school within the district or the next neighboring district. Let parents and taxpayers have some control, break up the organized hackery, and force the teacher unions to downsize.

Not mentioned anywhere is the fact that over 70% of the Chicago school budget is spent on pension obligations.

No real knowledge of math required…

Think of the children? It seems their primary concern is compensating for the inflationary policies of our government and especially the federal government. It’s worth noting that they do not protest causal issues.

I live in Chicago. My kids are long out of school. I don’t expect Rahm Emanuel to destroy the union. But I wish he would.

While COWS (Cooperative Occupy Wall Street) exercises extrajudicial judgment of private interests and indemnifies authoritarian interests, the public unions hold the government, and the citizens it serves, hostage. They are complementary movements which serve their own purposes, which are not the rule of law nor American citizens.

Because of what’s happened in New Jersey, Wisconsin, and other states, you can bet that every teacher’s union contract will be heavily contested from here on out. For unions this is an existential issue – and for the Democrat Party as well.

[…] The ‘Occupy’ assclowns have reared their ugly heads in support of the CTU. […]