Why are infographics so irresistible?

Why are infographics so irresistible?

If you were to look to the masses to see what stereotypes persist about different states, analyzing the auto-completes that come up in google searches is certainly a creative way to start.

The blog No Upside mapped the auto-completes for each state, with some amusing conclusions. Renee DiResta, the creator of the map, writes:

In the months before a US Presidential election, the quality of political discourse hits new lows. Blue State/Red State tropes dominate the news cycle as the media gins up outrage over perceived injustices in the culture wars. It’s all about our differences. So I started wondering, how do Americans really think about “those people” in other states? What are the most common stereotypes? For each of the fifty states and DC, I asked Google: “Why is [State] so ” and let it autocomplete. It seemed like an ideal question to get at popular assumptions, since “Why is [State] so X?” presupposes that X is true. 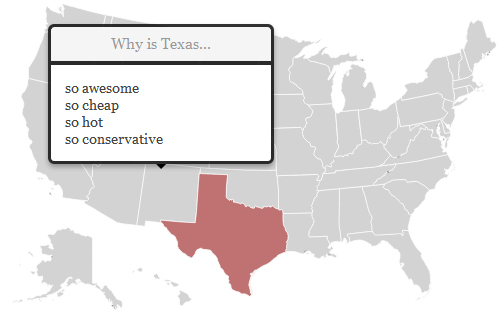 As some commenters on her site pointed out, the results may be skewed by the time of year (would hot always come up for Texas?), but overall it is a fun snapshot of the qualitative perceptions google searchers have of other states.

For example, my state, Illinois, is quite accurate; it is perceived as corrupt, flat, broke, and humid. California is liberal, broke, anti-gun, and expensive.

Sometimes the results tell a different story. For example, regarding Alabama: racist, good, good at football, and obese.

Why would search terms for various states such as “obese” or “racist” happen with such frequency?

Many of these stereotypes, sometimes exaggerated or worse, and certainly emphasized, by the media, are having enough of an impact to show up in DiResta’s analysis.

Take it is a snapshot, then, not only of how we perceive each other, but also as a reminder of the power of the narratives put forth in our culture and media.

Andy Warhol should have expounded on his “15 minutes of fame” meme and included “15 minutes of thought about issues that will affect you and your family”.

I’m suing this website for whiplash damages due to going from David Bowie to Led Zeppelin in one swell foop.

See, it was a simple matter of misinterpretation.

I believe Alabama was listed as the “fattest” state in the most recent Men’s Fitness magazine annual rankings. That might explain the Alabama/Obese association.

I checked this out for California – focusing specifically on why Calfornia is so broke – and the first item that popped up was a HuffPo piece that seems to blame it on CA corporations using new tech to avoid paying state and fed taxes. Another site blamed it on the overabundance of state agencies (mis)using state funds and always greedy for more of the budget – it’s how they measure success at the state and federal level. Still another blamed it on things like spending $205,000 to move a $15 bush. The Huff ‘N Puff (HuffPo) piece is the only one I don’t put a lot of credence in.

How did this article get by the NYT editors???

“In Real Estate Deal, Romney Made His Loss a Couple’s Gain”

I’ll confirm the Texas assessment… It’s getting more conservative all the time. Just look at Cruz’s recent landslide against an establishment Dewhurst.

This is a good thing. It’s time to recycle Perry, Dewhurst and a few other RINOs.

And in this case, “cheap” is good.

Lastly, the “heat” is easily controlled by engineer provided A/C!

Fun! My new home state of Florida is “weird,” “humid,” “trashy,” and “popular.” Haven’t seen the weird and trashy but am very much aware of the lung-crushing humidity and traffic-jamming popularity.

My former state (actually a commonwealth) of Massachusetts is “liberal,” “expensive,” “expensive to live in,” and “important.” Because 2 and 3 are similar, I’ll note the fifth is “democratic.” I’m pretty sure that 1 and 5 explain very well 2 and 3 (because we all know that “democratic” actually means leftist these days).