No media at Tea Party rally to expose media bias

No media at Tea Party rally to expose media bias

This past Saturday, Tea Party activists from Ohio and around the country converged on Cleveland for the Occupy the Truth for Peace and Justice rally and march. Organized by Andrew Marcus of the upcoming documentary, “Hating Breitbart,” the march centered on Andrew Breitbart’s charge to expose the mainstream media—in this case, the virtual media silence over a group of Occupy activists who planned to blow up a bridge over the Cuyahoga valley and the Federal Reserve building in Cleveland a few months ago.

First, many in the mainstream media have refused to refer to the plans as “terrorism,” and second, they have refused to identify the accused as Occupy members. Read more about the plot and the five alleged conspirators, who are now on trial.

And, true to form, not one news outlet (besides yours truly and other “bloggers”) showed up to cover the rally and march, which included speakers Michelle Malkin, Dana Loesch, Sonnie Johnson, Jim Hoft, and Andrew Marcus.

What would they have found if they had come to the event? First, a small press conference held on the outskirts of the event with members of Occupy Cleveland, where they repeated their defense of their accused members as victims of “entrapment.” Also, they’d have found one Occupy member, who attended the Tea Party rally held soon thereafter, shouting “Uncle Tom” at speaker Sonnie Johnson, an African American conservative. It turns out, his name is Tim Russo and he is a convicted sex offender.

Tea Partiers at the rally held up hundreds of Andrew Breitbart paper masks as they remembered the “happy warrior” and his mission. After the rally had concluded, the march set off, with papier-mache Occupier “Stinky Stan” (also known as #Occupooper) leading the way. 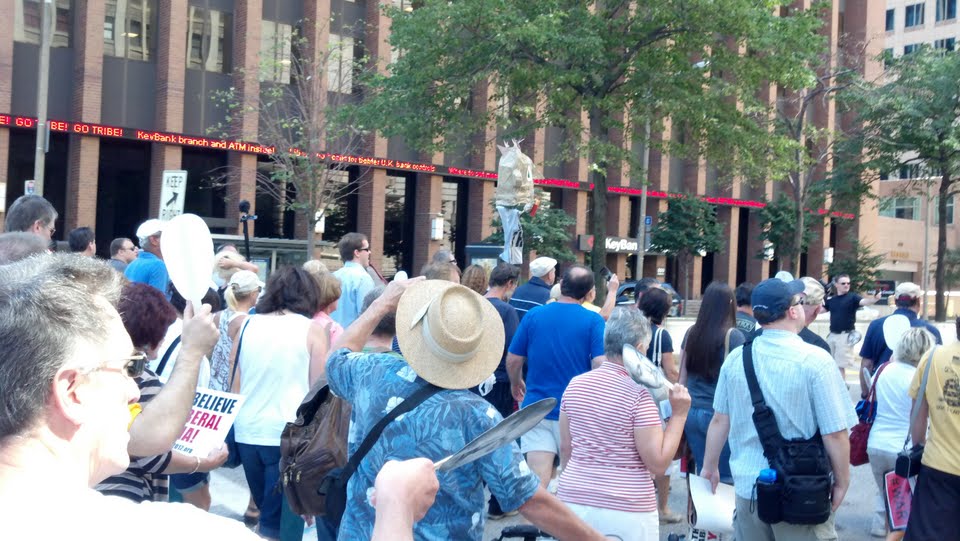 With Jim Hoft of The Gateway Pundit on the microphone, he led the crowd in chants such as “We will not be crapping on sidewalks!” and “There will be no raping today!” — references to the numerous instances of rapes (and the infamous cop car picture) at Occupy encampments. 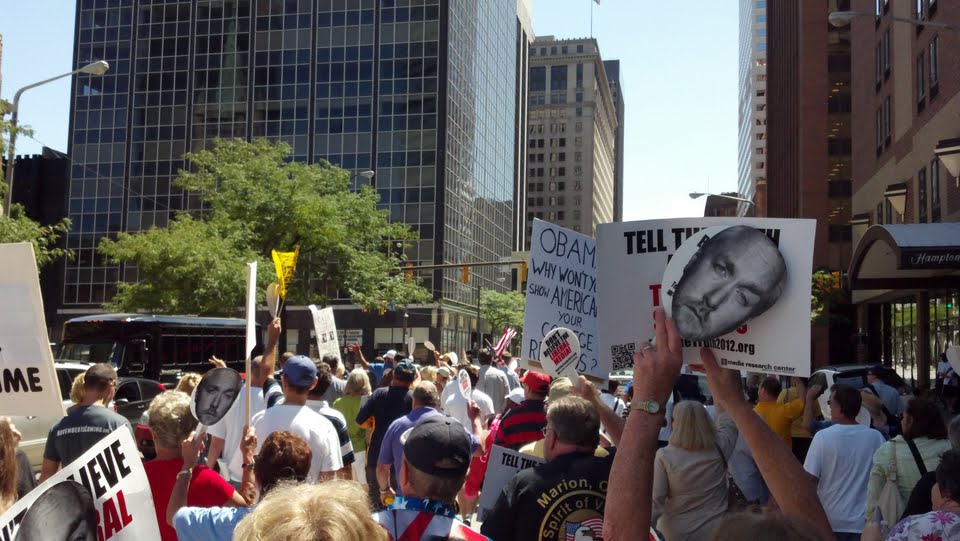 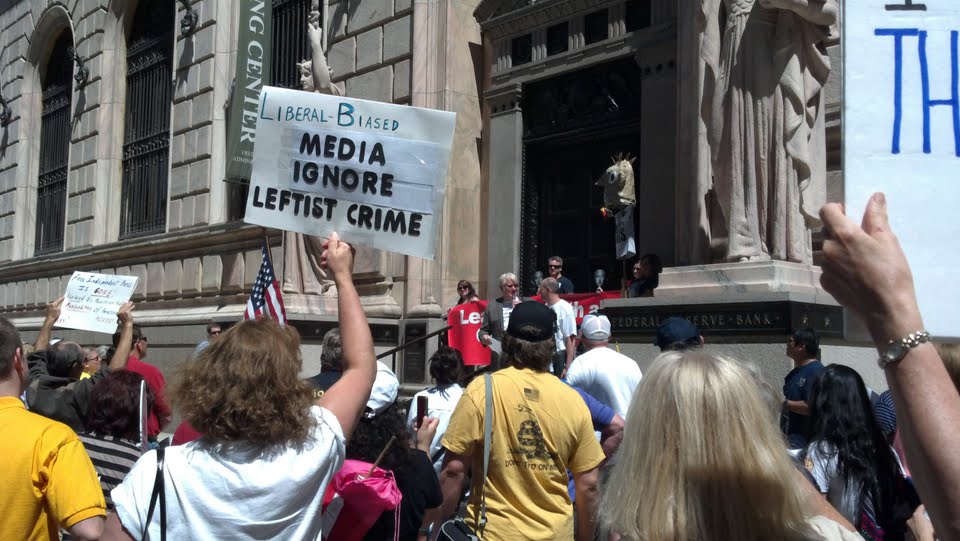 They then decamped to the site of the planned bombing of the bridge, which carries 10,000 commuters a day. 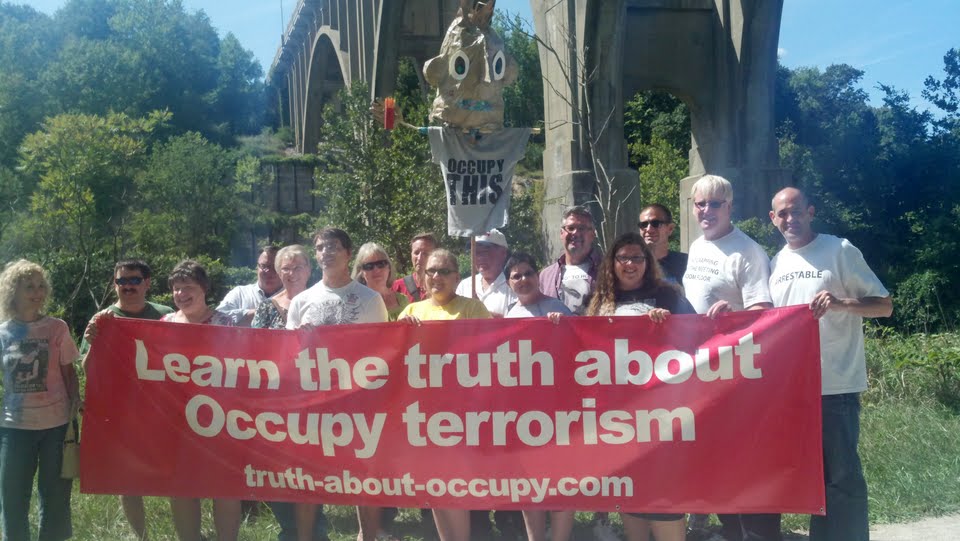 Andrew Breitbart said the greatest challenge to everyday Americans seeking to take back their country was a walled-off mainstream media that covers up and ignores stories, either through laziness or to pursue their own political agenda.

As Michelle Malkin said at the Occupy the Truth rally Saturday, what’s worst of all, is when they are so self-deluded that they think of themselves as unbiased (read: Soledad O’Brien).

If the mainstream media had attended, they also could have covered the everyday members of their community speaking “truth to power”–from union members and coal plant workers to teachers and three generations of families, Ohioans of all stripes came to “Occupy the Truth” and expose the lack of accountability provided by the so-called Fourth Estate on this act of attempted terror on their community.

Update: Video from the event from Breitbart’s Rebel Pundit here.

“Nothing to see here… Move along folks!”

Yep, the MSM is too busy covering important things like O’bammy no shows at the White House press room.

It’ll be all over soon folks… Keep the faith!

And wouldn’t you know it… The anointed one actually held a news conference and of course within a couple of questions lied again, (denying that Romney was not accused of being a felon), etc.

Then I switched to the cooking channel…

I’d love to see you on with Soledad O’Brien … the constant, distracting vibrating noise would be her Wikipedia ear-piece feed on overdrive.

I thought I’d read that one of the Cleveland guys had pled out, but I could be confusing that with the Chicago guys.

Hard to keep track of all the crazies the Revolting Eloi have within their “mostly peaceful” and “just like the TEA Party” numbers.

Lesson to would-be anarchists and revolutionaries-by-violence…

do a criminal background check on your co-conspirators. Look up “prisoner’s dilemma”…

Still reeling from a revealing skinny dipping scandal that threatens to dampen their party’s electoral prospects in November, moderate Republicans woke up this morning to find even some of their more strident members distancing themselves from a controversial tea party march the previous day in Cleveland, Ohio.

—There you go. It’s just like the mainstream media was there after all.