Huffington Post has an article promoted on its front page, published today at 1:36pm, from an “LGBT rights activist” referring to the Family Research Council as an “extreme right-wing group” and a “hate group”:

…extreme right-wing groups like the Concerned Women for America, Faith and Freedom Coalition, and the Family Research Council are also lauding Ryan’s hyperconservatism on social issues.

And in a sign that Paul Ryan has no qualms about flexing his anti-gay muscles during the campaign to those extreme groups, he has agreed to address the Family Research Council, which the Southern Poverty Law Center deems a hate group, at the organization’s annual Value Voters Summit in September.

The post went live approximately two hours after the shooting, and remains there as of this writing. 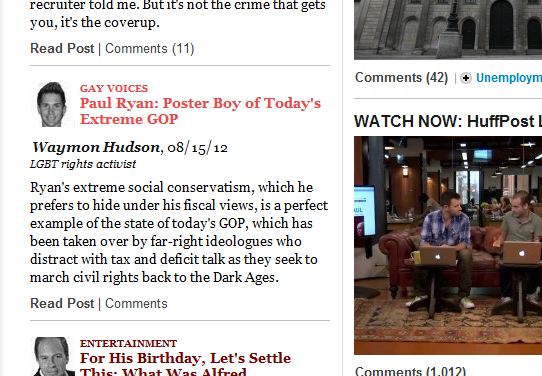 Read about the shooting at the Family Research Council this morning here.

This is a little example of the Collective’s war on religion…or views derived from some moral code not theirs.

Can’t waste a crisis, can we?

Such sensitivity and class.

These people are unhinged servants of evil. It doesn’t matter whether that’s their intention or not. In the real world — not the phoney-baloney leftist reality they hide out in — consequences really do matter.

Just in from Yahoo news …

I’m sensing a new meme for the lunatic-left: everybody who is NOT one of them is a racist AND a member of a “hate group.”

Pretty much it, I’m guessing. I also don’t think it’s too much of a stretch to guess that anyone who doesn’t contribute to the SPLC gets the “hate group” status as well…

I genuinely curious: are there any Conservative AND Christian groups out there NOT on Morris Dees’ Enemies List?

I hear he eats minority babies smothered in cash.

This is really beautiful. Remember the moment (not that there won’t be others in the brave new world the Left is pioneering for America). For what could be more Alinsky. That is, one does not recognize the humanity of the opposition. Once you’ve conceded they have any, you’ve opened the door to wider legitimacy. Total victory requires all opponents be seen in absolute terms. Indeed, imply that these people are so evil that they invited the attack.

Radical gay activists can’t stay out of the limelight for one day – me me me, its all about me.

NBC reports the shooter had Chick-Fil-A promotional materials in his backpack.

Has Brian Ross suggested a tea party connection to the shooter? Or is Huff Puff doing that this time?

I think they take turns or draw straws or something.

What kind of dumb ass parents would name their kid Waymon. Hey Waymon, get out of your Grandma’s basement and get a job. Don’t show the world how stupid you are.

Easy there. Wayman Tisdale was one of my all-time fav ballers and a great guy.

[…] More from Legal Insurrection, who captured this section of Huffington Post’s article:  …extreme right-wing groups like the Concerned Women for America, Faith and Freedom Coalition, and the Family Research Council are also lauding Ryan’s hyperconservatism on social issues. […]

I run an organization called Hate Group Tracker. We have designated the Southern Poverty Law Center as a hate group.

Little Green Footballs is calling FRC a “hate group” in post about the shooting.

I think they are secretly thrilled by this.

Because tolerance means killing people who don’t agree with you.

yes, but were they civil?

Is it just me or was HuffPo calling for someone to attack Congressman Ryan? Does the Secret Service know?

Ruthless people, no moral compass — they make it up as they go along.

[…] just can’t shake this “hate” rhetoric. Within hours of the shooting, Anne Sorock reports at Legal Insurrection, the Huffington Post “promoted on its front page” a piece by  an “’LGBT […]

Shoot back, and shoot to kill.

[…] media.  Groups which support retaining the definition now are hate groups — with SPLC cited as the […]

[…] media.  Groups which support retaining the definition now are hate groups – with SPLC cited as the authority. With the SPLC fanning the flames, the Chick fil-A company has been subjected to […]