Elizabeth Warren is down in the latest poll, so it seems she has decided to double-down on the war on women theme, running radio ads complaining about Todd Akin and national Republicans.

As part of this new theme, Warren also has launched a campaign theme called “Stop Talking” based on Scott Brown supposedly telling Warren to stop talking.  The theme portrays Warren as a woman verbally battered by Brown.

I spend a lot of time talking about Scott Brown’s voting record — and Scott Brown doesn’t like it one bit.

Yesterday, a news reporter asked Scott Brown to respond to my statement that he supports the national Republican agenda. Scott Brown said — and I quote:

“I don’t need Professor Warren talking or speaking or commenting on my votes.”

Warren uses this clip to play the victim of a bullying male Brown, as if it were a man telling a woman to shut up.

Here are some of the tweets Warren sent when she launched the theme (screen shots from yesterday): 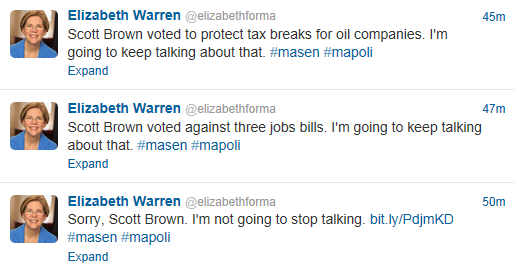 Warren repeated this theme in a fundraising email, as reported by HuffPo:

“I’m not going to stop talking, and I hope you won’t either. Talk to your friends — call them, Facebook, tweet, send them a fax if you’re old fashioned. Talk to the person behind you at the grocery store, and talk to the person pumping gas next to you,” Warren wrote. “Let them know why this race is so important.”

The problem is, Warren misleadingly clipped the video mid-sentence.

Warren’s theme is based on a doctored video.

While the more complete video is not available, Brown’s full sentence was quoted at HuffPo, and the full sentence makes clear only that Brown was telling Warren not to distort his record:

I don’t need Professor Warren talking, or speaking, or commenting on my votes… [she shouldn’t be] distorting and misleading the voters about where I stand on issues.

Why did Elizabeth Warren feel the public shouldn’t hear the rest of Brown’s sentence?  Did she fear it would take away from the effect she was attempting to paint of a woman victimized?

The always reliable HuffPo fell right in line with the act, casting shame on Scott Brown for implying that he didn’t want to hear Warren’s opinion on his votes:

Sen. Scott Brown (R-Mass.) seems to have a new message for his Democratic Senate rival Elizabeth Warren: Shut up, already.

And later in the same HuffPo article:

This is not the first time Brown has been dismissive of Warren. A recent National Journal piece on the race reported that “Brown cuts in on a reporter quoting Warren’s criticisms of him, interjecting, ‘Blah, blah, blah, blah.'”

As a woman, I can’t “stop talking” when I see others of my sex feigning victimization, when women in our country and around the world fight with very real discrimination and hardship.

To imply that Scott Brown was doing this trivializes their plight and degrades Elizabeth Warren’s increasingly trite and shallow message.

This article has a good examination of how Warren distorts and lies about Brown’s votes, Elizabeth Warren has little respect for Massachusetts Voters.

Brown should come back with an ad: “Stop lying”.

The liberal media is tilling soil for this theme with articles about women being silenced (also tying in Akin’s comments, and Akin to Ryan), e.g. http://m.motherjones.com/media/2012/08/problem-men-explaining-things-rebecca-solnit

She seems more the type of person who would talk over someone else in a conversation; I’m quite sure she isn’t the vectim she’d like to paint herself to be. Why do these female politicians think other women are so gullible? Desperation so soon…tsk, tsk, tsk.

It is obvious how the Obama administration is relying on negative and misleading campaigning to excite enough of the base to survive, forsaking the independents. But it is downright pitiful that the Democrat party has to resort almost exclusively to those tactics in MA, which has historically been the most reliable. Even worse, their mantra of “the Kennedy seat/heir” isn’t working. Desperation is unbecoming to even the most ardent progressives and liberals. This will backfire, I suspect.

Brown campaign ad opportunity – call it “You’ve seen her ad” – use the same video clip and show visually where her people cut off the sentence. Continue to play the whole sentence and say “See, she did it again with this ad!”

Brown should come out with an ad giving the entire clip, and end with the question: “Why wouldn’t she tell the whole story?”

Of all the Senate races, this is one I really want us to win, even if Brown is not a reliable conservative. She is just so grating.

I agree, stuff like this is so easy to counter.

Srsly, though, I hope Brown wins this one.

What a thoroughly, endlessly despicable person. I can understand why the Left loves her.

The comeback ad writes itself.

The issues we face are difficult enough, without the distortions introduced by lying.

I hope the “real” Cherokees come out in droves in Charlotte to protest against her – but don’t hold your breath waiting for the LSM to report it. This would make a great TV ad.

Great post Anne. I’m glad there are people like you to call bad politicians out on this garbage!

I’m sorry to say this, but Warren’s campaign tactics are hysterical exaggerations issued with the intent of whipping up hysteria in the people Warren expects to be sympathetic to this tack, which, of course, is women.

Expecting women to respond positively to hysteria must be said to be degrading and (to use a term that has become popular in the last few days,) legitimately sexist.

No decent person would try to get black people to attend a dinner by saying that watermelon will be served. By the same token, it is indecent to expect women to be easily provoked into hysteria.

Elizabeth Warren using “doctored” evidence in her ad? Just like she doctored her heritage? Color me shocked. Shocked, I tell ya!

Lizzy is a pathetic Looozr whiner. 6 months ago she was the template rising dem woman star. Thanks in part to the Professors tomahawk job on her she is looking more like a dead Armadillo on a Texas road. A fitting end for the “Kennedy” seat. Hopefully the Oldsmobile will finally disappear beneath the surface leaving only diminishing bubbles to pop.

Is there a better description of a typical Democrat? Everyone, even a Harvard Law Professor pulling down several million a year is a victim.

So Brown states he doesn’t need Warren misleading people about his votes.

The Warren response is to mislead people about his statement.

This election is about freedom versus the (phony promise of) free things.

But it boils down to truth versus the lie.

Obama and the media boldly lie about nearly everything.
Obama will halve the deficit? nope … tripled it.
Obamacare will reduce deficits? I can keep my plan? Insurance rates will be lower?

Ayers was just a guy in the neighborhood? He never heard Wright say those things? He was not a member of the (socialist) New Party.

He is not gutting the welfare work requirement. The private sector is doing fine. He created more jobs than Reagan. It goes on endlessly.

While the more complete video is not available, Brown’s full sentence was quoted at HuffPo,…

Why is the full video “not available”? Is the Left suppressing it? That would be a story in itself.

Anne, if you mean that you haven’t been able to find the full video, it would be helpful to say so explicitly. Other people then might get involved in searching.

Very good question, and one I’ve been working on. The video appears to have been filmed by “NECN,” as you can see their watermark on the lower right hand corner. And NECN produced a piece yesterday on “Women’s Issues in the MA race,” which is the text you see flash by on the video while Brown is speaking. NECN has this video segment on their website with both Brown and Warren about Women’s Issues, but you don’t see this part in it (and Brown is wearing a different tie). I do think it is odd that, at this point, the only ones I can identify as having the video clip are Warren’s campaign and the Huffington Post.

Dizzy Lizzy is a one-trick-pony, and that lame trick had nothing to do with solving any of our biggest issues, i.e.: the reason we vote for ‘representation’ in Congress.

Browne is by no means my first or favorite choice, but at least he sticks to the issues that are preeminent in the minds of the majority of Massachusetts voters.

I’m beginning to suspect that Elizabeth Warren is less than honest.

Well, maybe Scott Brown won’t tell her to shut up, but I certainly will.

Scott Brown signs are everywhere. Driving through Holliston yesterday, I saw the first Warren signs, along Rt 16. They were peppered in, where ever Scott’s signs were. But it’s neighbor, opposing the next door neighbor.

Interesting stuff. People don’t like her. Honestly, she’s unlikable to more than you’ll know. I guess we can thank Martha Coakley for that. They are very similiar, to each other.

Lie, cheat, steal, kill: it’s all okay for them.