Elizabeth Warren cannot escape the public’s questions about her claims to Native American ancestry. A live chat today demonstrates how deeply the issue has permeated the campaign dialogue.

On the local Massachusetts community news website, Patch.com, Elizabeth Warren participated in a live chat where the site invited readers to ask questions of the Democratic Senate candidate.

The first question the moderator put through to Warren cut straight to the question of her claims to Native American ancestry:

“Although there is a relatively small number of Mass. voters of Native American descent, do you feel you have addressed their concerns about your own statements involving your heritage?”

Warren, who took five minutes to respond, failed to address the question itself, instead reiterating her familiar description of her Native American ancestry claims. 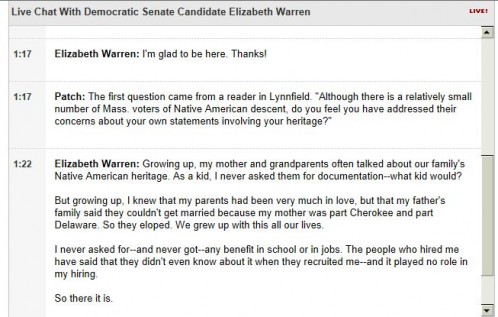 While Warren continues to have to explain to the public about her claims to Native American ancestry, this particular question was a “softball” compared to those other readers had.

In the minutes preceding the official start, the following, much tougher, questions had already begun to populate the comments section:

One reader, unknown to us, linked back to a Legal Insurrection piece in their comment on the livechat:

The Patch reporter that appeared to moderate the livechat, Sara Jacobi, describes herself in her bio on the Patch website:

I am a registered Democrat, and I would describe my political beliefs as mostly liberal, especially related to social issues. I am unsure where I stand on economic issues such as labor unions.

The fact that the moderator of the livechat felt the need to put through a question about the Indian issue demonstrates how deeply Warren’s minority claims have permeated the campaign discussion.

Now, I have no documentation to support this … it’s just lore at this point …

… but rumor has it that Dizzy Miss Lizzy Warren has been visiting a psychiatist with complaints that she can’t get the following little ditty out of her head … it just keeps playing over and over in her head and it’s driving her crazy:

You peck at them long enough, in the right places, and they fall.

Not pecking, my friend. Undermining. Beginning in ancient times, undermining, the literal tunneling and boring beneath formidable battlements to remove the foundations, was the most reliable way to topple curtain walls and towers alike. Only with the advent of gunpowder, was the miners’ work made obsolete.

Yes, undermining, right under their bloody noses. A shovel at a time, until their once imposing keep is supported by only timber shoring and empty space. Once fired, the shoring collapses, and the whole mess becomes but another pile of silent stones. The surprise, like the devastation, is complete.

The new media are the trenchers and tunnelers of our age. Shoulder to shoulder, clad in anonymous darkness, they cut away the foundations that support a bulwark of lies. Slow. Insistent. Yet inevitable. Only when the fall occurs, does daylight penetrate the silent darkness, but by then, the diggers have moved on.

What’s that slight tremble beneath your feet Liz? Mice? No. It’s truth inching its way closer to your facade of lies and half-truths.

“Sappers”; they still had to undermine, right?

I have this sinking feeling this is going to backfire and help elect her.

Liberals not only don’t care if you lie, it’s almost a prerequisite.

Try telling them the truth-

Would I lie to you?

Had Brown not alienated the Tea Party activists who got him elected, he would be a clear favorite for reelection; in fact, Warren might not have challenged him. As matter stand:

For a time Warren looked like a dominant winner. The Cherokee thing (kudos to Bill and his associates) has turned the race into a toss-up with maybe a slight edge to Warren.

Not to be a bird of ill omen on this Friday the 13th, but I continue to maintain that something additional is needed for the coup de grace: ideally, something affecting voters’ self-interest.

Warren’s live chat pat answer was copied and waiting to be pasted upon receipt of this pre-arranged soft ball.

If you look really closely at the screen shot, you can almost see the rubber cement around the edges where she pasted.

Dizzy Miss Lizzy, you’re supposed to rub away the rubber cement that oozes out. It’s even kind of fun to rub it away.

None of those factors are in play this time.

I am quite bummed; I was all set to get a question into Patch and never got the chance (heh).

I think folks are being a little pessimistic, and a little hard, on Senator Brown. While there are some conservatives who won’t compromise, I think a lot of Pubs and center-right folks recognized that a Republican in Massachusetts is a little different than one in Kansas or Alabama. Mr. Brown is ‘pink’ to a little ‘purple’.

Whereas, Elizabeth Warren is ‘indigo’.

Ask me which I prefer in the Senate.

And don’t ask for ‘crimson’ because Massachusetts won’t give you that color.