In one of the oddest and most uncomfortable moments of Elizabeth Warren’s defense of her claim to be Cherokee, Warren invoked her Aunt Bea, who allegedly told the story a thousand times about how Aunt Bea’s father (Warren’s grandfather, whom Warren referred to as her own “pappaw”) had high cheekbones “like all of the Indians do”:

So Aunt Bea was Indian, sharing the same ancestry as Warren, according to Warren, and that ancestry was such an important part of who Aunt Bea was that she told the story about the high cheekbones at least a thousand times.

Yet when Aunt Bea died, she was not identified as American Indian by the person who informed the State of Oklahoma about the death.  That “informant” was none other than Warren, and she identified Aunt Bea as “White,” even though the Certificate of Death listed American Indian as the first of several alternatives.

This information was uncovered by Cherokee genealogist Twila Barnes: 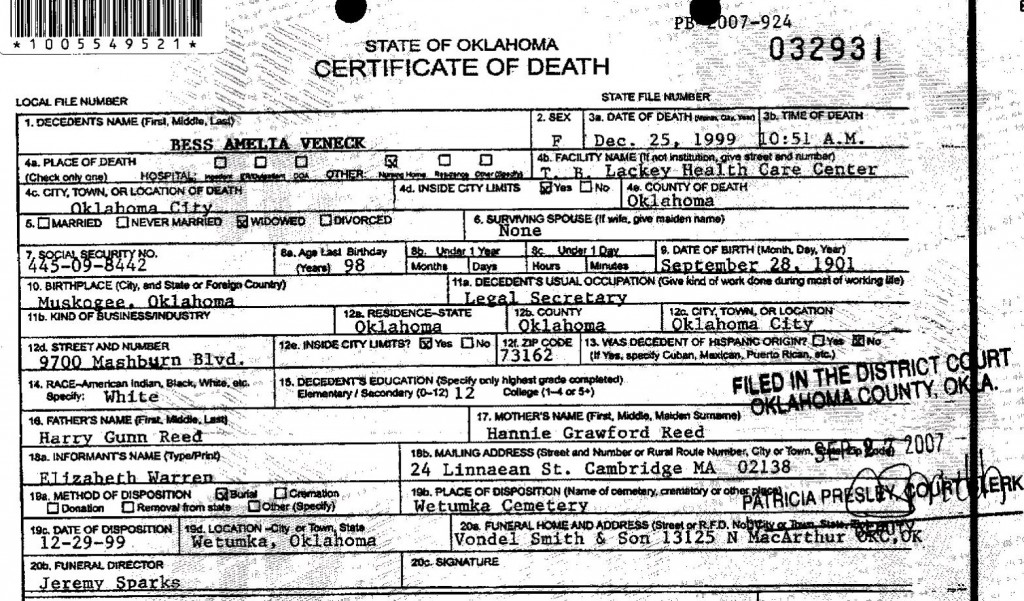 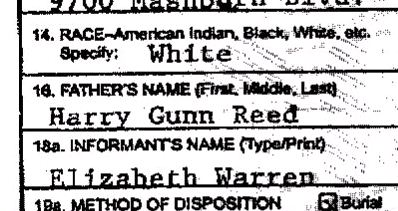 That Warren chose to identify Aunt Bea on an official record as “White” doesn’t disprove absolutely that Aunt Bea told stories about being Native American, but it does show that as of the date of the Certificate of Death in 1999, Warren did not deem such stories (assuming they were told) to render Aunt Bea Native American for reporting purposes.

Yet in that same time frame Warren was identifying herself to Harvard as Native American for federal reporting purposes.

and Aunt Bea would have been at least twice as much Native American Indian as Warren.

THAT is a significant document. A Perry Mason moment.

“So, Candidate Warren, which story do you want the voters to believe? The one where you as an official Informant state under the pain and penalty of perjury that the deceased was white. Or the one where family folk lore holds that the Warrens possess an infinestial amount of Cherokees blood.”

I’m sure that it was the Christmas death that seared this memory. There’s a lot of memory searing in Mass.

To be fair to Mrs. Warren, she was under too much grief at the time of Aunt Bea’s death to keep the charade up. Just excuse this temporary lapse of truth out of respect for her High Cheek bones that all indians have.

Aunt Bee? Andy Griffin? Does the word “beclown” appear in all the dictionaries now?

No, it does not appear.

Warren is a shameless liar and the left gives their own a pass for lieing.

Actually, in this one instance, only, the cry should be “Auntie!”

Prof, I watched yesterday’s video of Warren sailing over proof that she was for the individual mandate before she was against it. The “Ooooo”s, uttered in a lecturing tone with a scowling face face, leave me with the distinct impression that this woman has a mean streak or, worse, looks down on anyone who isn’t her. She’s a classic Obama clone. Dog help the residents of Massachusetts if she’s ever placed in a position of political power.

On second thought, maybe they both belong there. This woman is two-faced if ever anyone was.

The high cheekbone comment, if it happened, would seem more to be a sarcastic bigot remark than anything else.

“The great enemy of clear language is insincerity. When there is a gap between one’s real and one’s declared aims, one turns as it were instinctively to long words and exhausted idioms, like a cuttlefish spurting out ink.”
— George Orwell

Feel free to cut and paste this quote for the next article on Obama, Biden, Clinton, the other Clinton, Pelosi, Reid, DWS, NBC, CBS, ABC, CNN, MSNBC, etc., etc., etc.

Maybe a reporter should really press her on that issue next time she is in an interview?

Aesop, even if he were real, would (there is some doubt) marvel at the Warren Fabulist.

Once again: Hoisted. Own. Petard.

[…] Warren of her proud Native American heritage, based on Bea’s father’s “high cheekbones.” According to Legal Insurrection:  So Aunt Bea was Indian, sharing the same ancestry as Warren, according to Warren, and that […]

Frances Bavier was said to be part Native American. She also appeared in one episode of Rawhide.

And since Aunt Bea is Opie’s great aunt, and we know that Opie has high cheekbones, we can simply ask Ron Howard if he can vouch for Granny Warren’s Cherokee heritage.

(Hey, my comment is just as nonsensical as Warren’s claim – and I’m not running for Senate)

Floyd the Barber, Luke’s favorite resident of Mayberry, was also said to be part Native American.

Proof positive: In my copy of “Aunt Bee’s Mayberry Cookbook”, two of the recipes attributed to Floyd the barber use the ingredient corn, or, as the Indians called it, maize.

Whatever Otis Campbell was drinking … I’ll have the same.

Totally off topic, maybe, in some sense: Corn always has been the word used to describe the prevalent crop in a region. For example, Caesar, in the first English transcription of his “Commentaries” that I read, referred to “Corn.” Not certain what that crop was but it wasn’t Maize unless Columbus was second, or maybe the umpteenth, to discover America. Maybe we’ve been flogging the wrong political correction legend all along! Who knew, eh? Other English translations I read, of Caesar praising himself, didn’t refer to “Corn.”

Still, perhaps Lizzy’s grasping of her Cherokee roots had a far more deeper meaning that any of us ever imagined. It might have a historic meaning well beyond her mere political founding.

Is Luke related to you? Just sayin’

We are all Mayberrians today. Andy Griffith dies at age 86.

[…] Warren of her proud Native American heritage, based on Bea’s father’s “high cheekbones.” According to Legal Insurrection:  So Aunt Bea was Indian, sharing the same ancestry as Warren, according to Warren, and thatRead […]

Meh. I can’t get excited about this one. It does not ask for all slices of one’s background. Just one. As a Masshole, I can tell you this is not going to change many minds. As one of the few openly Republican guys in my neighborhood,(Wellesley) I would do anything to see Fauxcahontas fail but this one does not do much for me. Flame away…

Too true. Any state that would re-elect someone culpable in innocent death (Kennedy) or who betrayed the USA (Kerry) wouldn’t hesitate a moment to elect a liar and academic fraud like Warren.

Liberals..can’t live with them and can’t export them to somewhere they deserve to be, like Rwanda.

We’re going to have to call Mr. Jacobson “Bulldog” for his continuing “dogged” determination in exposing the ongoing hypocrisy of Elizabeth Warren’s claims to Native American status.

If Warren loses to Brown, which is my immediate hope, kudos will have to go to Mr. Jacobson for his unrelenting efforts to bring the truth of the matter to the forefront and keeping it there for all to see.

Mr. Jacobson’s efforts remind me of the guys at Powerline, who did their part in exposing the Dan Rather prevarications of George W. Bush’s National Guard service in 2004.

This is no small effort and endeavor by Mr. Jacobson. Well done, servant of liberty, freedom and justice.

Here’s a question. Bea’s last known residence was listed, both here and on the Social Security death index, as Cambridge, Mass–Lizzie’s house, presumably. So how did she die in Oklahoma and did she ever really reside in Mass? Any accountants out there willing to suggest a possible economic reason?

That is, a possible economic reason for a lie about her residency.

It may be as mundane as wanting to be buried next to a husband who preceded her in death, or a family plot where her spot was already paid for.

Why do you hate Cherokees, women, and accountants? Geez.

Wanting to be buried there accounts for why the body would’ve been sent to Oklahoma from Massachusetts had she been living in the east. Unless you’re suggesting that, when Aunt Bea was terminal, Lizzie sent her home to die (at age 98), what explanation is there for the difference between her stated residence and her stated place of death?

I’m just wondering if, by listing her as a dependent residing in her home (it’s my understanding, right or wrong, that Bea’s Social Security income would’ve been exempt from the $3600 annually that’s allowed) and therefore providing care, Lizzie gamed the system. Wouldn’t have been the first time.

It may also have been some Cherokee cultural custom, arcane and mysterious to us white folk.

Perhaps, but as the time of death was Christmas day, it would be pretty easy for Warren to make the argument they were visiting family for Christmas.

I would never have dinner with her. She would lie about what she ordered.

This document is proof that EW lied on her Harvard application and lies today about whether she had any right to claim minority status and the substantial benefits that telling such a lie had for her.

When it doesn’t benefit her, EW tells the truth – Aunt Bea was white – as is she, as are her family. It is when she is trying to advance her career that she lies.

Please continue with the stories about Elizabeth Warren’s academic ethnic fraud…perhaps an accumulation of evidence will help to convince people that this issue is real and tells us a lot about EW’s character. It is truly unfortunate that the Massachusetts Democratic party decided to stick with Warren; there were some really good people who could have run for Senate instead.

I am perplexed why Harvard has been so silent [I assume they want complete neutrality on this issue].

But clearly Harvard lied – stating Warren’s Native American claims had NO EFFECT on their hiring decision – since when does Harvard hire staff from Rutgers Law ranked #82? And clearly Harvard filed false diversity stats with the Labor Dept. If EW filed a false C-V with Harvard, she should be fired. Period.

Time to dig up Aunt Bea & ask her. There is a tribe in Madagascar that does that if they have questions. Rules are that is only allowed once every 7 years .

I know it is not the Cherokee tribe but it is a tribe & all tribes are cool.

Maybe she got confused and thought she was in Cambodia that Christmas sitting on a gunboat with the other Senator from Massachusetts.

[…] heritage, based on Bea’s father’s “high cheekbones.” The Weekly Standard reports on the  Legal Insurrection story: So Aunt Bea was Indian, sharing the same ancestry as Warren, according to Warren, and that […]

[…] heritage, based on Bea’s father’s “high cheekbones.” The Weekly Standard reports on the  Legal Insurrection story: So Aunt Bea was Indian, sharing the same ancestry as Warren, according to Warren, andRead […]

The light just popped on as to the reason this blow hard is or isn’t ….she had a MOMENTARY LAPSE OF REASON …….

My great grandfather had low nuts…..What’s that make him?

[…] also told Warren to pretend she didn’t know about any of those things and to pin the blame on her Aunt Bea for telling stories about high cheekbones. And here's Rob Eno at RedMassGroup:David […]