If you’ve passed up your chance to have “Dinner with Barack” or “Grab a Bite with Mitt,” don’t worry. Another celebrity is deigning to let you join her table. This time, it’s Vogue editor-in-chief Anna Wintour who’s inviting you to join her and Sarah Jessica Parker on June 14 to help support Obama:

Someone, somewhere, must have done some market research that indicated, above all, Americans want to break bread with politicians, former terrorists–and fashion icons.

Mitt Romney has been offering “Grab a Bite with Mitt,” emulating the “Dinner with Barack” campaign tactic that he first debuted in the 2008 campaign and resurrected, although with less fanfare, for 2012.

While it might make sense for Barack Obama, who carefully cultivates a sense of celebrity around his brand, Mitt Romney certainly doesn’t have the same appeal. 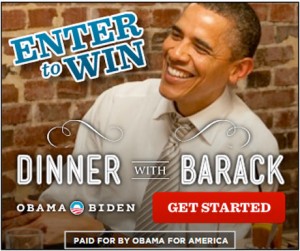 And of course there was the infamous terrorist charity dinner with Bill Ayers attended by Tucker Carlson and Andrew Breitbart.

As a student of Russian history, I can tell you Obama and Bill Ayers aren’t the first. Josef Stalin was known for showing up at peasants’ homes just around dinner time to show he was “one of the people” too. That was after he had taken over their farms and confiscated their food.

If Aleksandr Solzhenitsyn was still alive I would have dinner with him.

I would never have dinner with these condescending you know whats.

In light of recent gory headlines…

Question: does anyone here think that the seeming trend of prominent Deemocrats speaking well of Bain and/or Mittens signal the preference cascade we mentioned a while back?

Just wondering if Sarah Jessica Parker will be using knives and forks, or a feedbag? (Geee, Wilburrr!)

If SarahPAC offered a dinner with Todd and Sarah Palin, there’s not a stadium that would hold all the takers.

I would need a long spoon to sup with any of that crowd.

If they want anyone to come they’d better accept foodstamps 😉

What, you mean they don’t?

What a way to ruin a good meal.

My Dinner with Andre Part 0

I think I see a trend.

I’ve heard that grape is the Flavor of the Day…

Desperate times call for desperate measures. What are they going to raffle off next? Jobs? Oh, what is that you said, they already raffle jobs.

Thanks anyway, but I’d rather go hungry.

It looks like she’s wearing a lampshade with a space cut out for her face.

Hair is great for hiding many things. 😉

1. Anna Wintour says her job lets her “meet some of the most incredible women in the world, women like Sarah Jessica Parker and Michelle Obama.”

Gosh, Anna, you forgot to mention the incredible Asma al-Assad.

2. It surprises me how unimpressive many—not all—of the “elite” are when I see them without staging.

Or maybe the staging is still there, but I’ve learned to realize that the Greek columns are styrofoam.

Why anyone thinks anyone wants to have dinner with that pair of vapid haridans is beyond me. I think this is strike 17 for Barry. I can’t wait until the fat lady sings in November.

Let me know when there’s a chance to have dinner with Paul Ryan. I hear he drinks pricey wine and I’d like to compare it with the $10 Lindeman’s I usually drink.

There would be no other reason why I’d want to have dinner with Paul Ryan. Nope. None whatsoever.

And seriously. Have you ever seen two women (Parker and Wintour) who seem more like vampires than those two? The imagination runs wild. They invite you in and close the door.

And then you’re alone with them. And their teeth.

Anne – I think Stalin would ensure that the lucky family actually had food& a farm before tuning up.

Otherwise it would be akin to Obama visiting an unemployed person to find there was no home (repossessed ) & no dinner.

As I recall at a similar time in history things were not so great in Oklahoma. Tens of thousands of people were driven from their homes without lunch.

Curious what kind of fashion tips Wintour will give to MO.