Now that Richard Mourdock has defeated Dick Lugar and is well into his general election campaign against Democrat Joe Donnelly, it is of paramount importance that we keep Mourdock’s campaign for Senate strong.

Top-tier Republican figures are aware of this, as evidenced by Florida Senator Marco Rubio’s recent trip to Indiana to stump for Mourdock and aid in his fundraising efforts.  Lugar, of course, is playing the sore loser and refusing to help Mourdock.

Following Mourdock’s expensive primary battle, Donnelly was ahead in fundraising since Donnelly wasn’t forced to campaign for his nomination.

As of primary night Mourdock was trailing Donnelly in fundraising totals by nearly $800,000.  Mourdock launched a Match Donnelly Money Bomb which was highlighted here at LI, at Michelle Malkin’s Twitchy, and elsewhere.

I checked in on Mourdock’s site and it appears that the Money Bomb was quite a success. 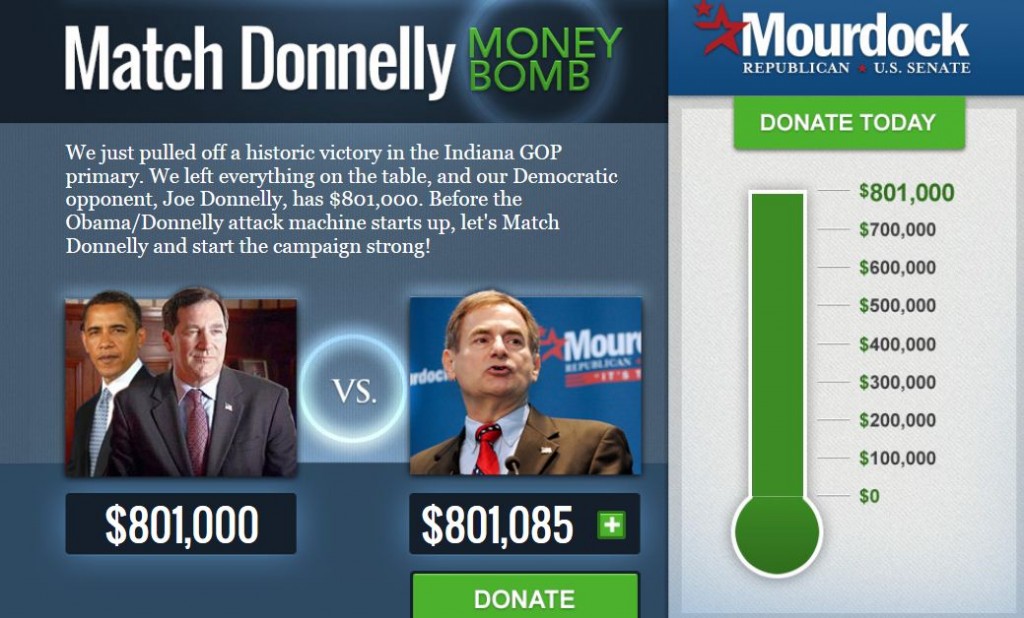 Those numbers probably overstate Mourdock’s gain, since Donnelly may have raised money since then.  Judging by the Mourdock campaign’s most recent video, they are aware of the potential money gap as Democrats put money into the race:

The Mourdock race for Senate is an extremely important one for conservatives.

With Mourdock’s victory over Lugar, we have proven that we can take what’s wrong with our own party, and make it right. Mourdock’s general election bid will be the event that tests whether we have the capacity to propel the candidates that we have chosen into the seat, or if we have simply opened up a gaping hole for the Democrats to take advantage of.

I doubt that it’s the latter, but the most recent polling (which is from one month ago and done by a Democrat party group) suggests that this race cannot be taken for granted as a Republican win.

If you want to help keep Mourdock’s campaign strong, you can donate here.

I don’t think Lugar is much of a factor now anyway. Not to say the race is a given by any means, I just don’t think his endorsement or campaigning would help much.

Richard Mourdock was the only public official to take Obama’s Chicago gang to court over their perversion/subversion/scrapping of the laws of bankruptcy, on behalf of Indiana pensions who had invested funds into Chrysler Corporation as supposedly ‘secured’ creditors. The whole country should have risen up in fury at that naked payoff to the UAW by the White House crooks, but Mourdock at least spoke truth to power. He has earned that Senate seat.

Well, at least Lugar isn’t being as big of a sore loser as Lisa Murky of the Alaska Murky dynasty. It’s as big as the Bush dynasty – and is, not coincidentally, backed by the Bush dynasty.